The Kessil A500X is a brand new LED spotlight that packs an astounding amount of power into the company’s trademark Dense Matrix Array LED. This 185 watt aquarium light is a powerhouse of illumination and because of its point source emitter it is the closest approximation to the output of a metal halide that we’ve ever seen in an LED light.

Functionally the A500X has all the same features as the other lights in the Kessil lineup like the A360X and the AP9X including onboard dials for manually adjusting the Tuna Blue spectrum between white and blue. There’s also the same dual USB-C inputs for connecting to the Kessil Spectral Controller, the wireless control dongle, and daisy chaining multiple fixtures to the lighting system.

Longtime users of the newer Kessil lights will be entirely familiar with everything about the Kessil A500X except the substantial amount of power that this light emits. With one hundred individual diodes under the Dense Matrix Array this ain’t the same 185 watts from 2015. 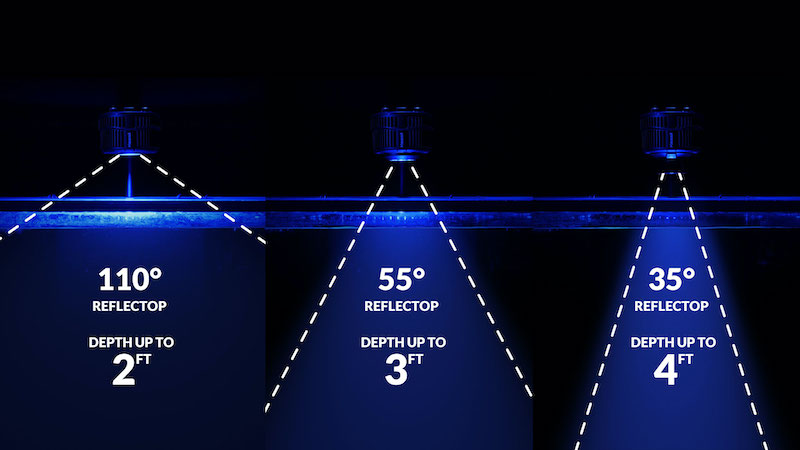 By driving this huge spread of diodes at less than 2 watts each the A500X is part of a newer generation of reef aquarium lights that really takes advantage of the physical advantage of driving more LEDs at lower power resulting in dramatic efficiency increases. Those who are uninitiated by what this efficiency means might try to compare the A500X to generic multichip lights but Kessil’s new spotlight is totally in a league of its own.

The emitter of the A500X has a native beam angle of 110 degrees but it can be paired up with the same 55 degree magnetic reflector that is used in the A360X and in fact comes bundled in the box with the A500X. A novel accessory being introduced with Kessil’s brightest reef spotlight ever is a new conical reflector with a 35 degree beam angle to focus the light for even more intense par, or punching to the bottom of deeper tanks to a height of up to four feet. 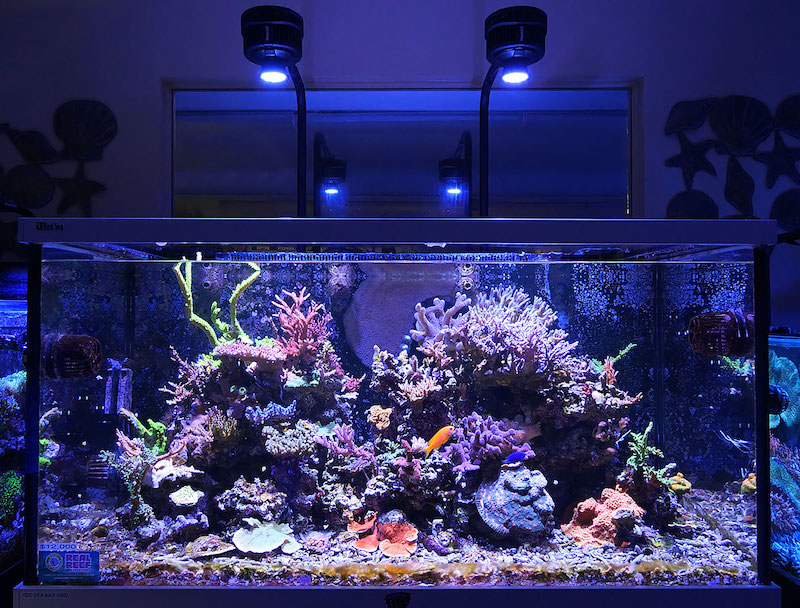 As with the A360X the A500X has multicolor, multichannel control with mixed white and mixed blue channels that users can access without any other hardware. Once connected to the Spectral Controller or the Wifi Dongle users will then be able to tap into three more color channels including a deep red, rich green, and a purple channel with both violet and indigo emitters to fully round out the overall spectrum.

Despite all these upgrades the A500X is only slightly larger than the older Kessil A360 which has been made possible by turning the near entirety of the fixture into the light’s heatsink. As with the A360X the electronics package to accomodate all of the drivers and components are pancaked into one end of the fixture enabling the rest of the housing to be dedicated to cooling with a custom designed fan and abundant metal cooling fins.

The wide open design of the A500X is optimized for airflow throughout the entire diminutive fixture so that it runs very quietly even when it’s operating at full power. It would be hard to believe that there’s nearly 200 watts of cooling going on inside the A500X by simply listening to it which is due not only to the creative cooling design, but also the efficiency of driving this many LEDs at lower individual power.

At around 780 grams or just under two pounds the A500X is compatible with the existing gooseneck mount but just barely, and it can start to lose precise placement once you add the weight of the wifi dongle and the optional full angle adapter. A better mounting option will be the rigid mounting arm, probably with an extension tube since users are most likely to be running this degree of power on a larger and deeper aquarium.

Kessil has designed the A500X specifically for very bright light applications, especially SPS corals and they are expected to evenly light up an area 36 inches in diameter. We’re excited not only by the copious amount of power that this light produces, but also the diverse mounting possibilities which will enable some very creative and striking reef aquarium displays.  Even if you have a smaller display or coral with more reasonable lighting requirements you’ll be able to mount the Kessil A500X high above the aquarium to produce dramatic spotlighting effects with unadulterated top down viewing.

The Kessil A500X will be priced at $739 which gets you the light, power supply, and the 55 degree magnetic reflector and will go on sale later this month on March 31. We’ve been using a pair of these on our Mangrove Lagoon for several months and we can’t wait to do a follow up article showing you everything we know about this light so far, and we’re looking forward to discovering the unique ways that reefers will use the very unique form factor of the powerful Kessil A500X spotlight.

RVS Fishworld Stumps Us With a Wild Acanthurus Surgeonfish Hybrid