This is NOT a Blueface X Sixbar, it’s a Sixbar x Blueface Hybrid

A month ago we wrote about a super rare example of a hybrid Pomacanthus angelfish which was a cross between the blueface angelfish and the sixbar angelfish. Once again the filipino collectors have fished up an awesome hybrid angelfish specimen and while this specimen is also a cross between Pomacanthus xantometopon and P. sexstriatus, it is not exactly the same fish!

About one year ago we wrote about a fascinating research experiment involving the hybridization of squamosa and crocea clams that documented the hybridization of these two species. The hybrid offspring involved the fertilization of the eggs of one species and the sperm of another, resulting in two lineages of ‘reciprocal’ offspring that each bore the most resemblance to their maternal lineage. 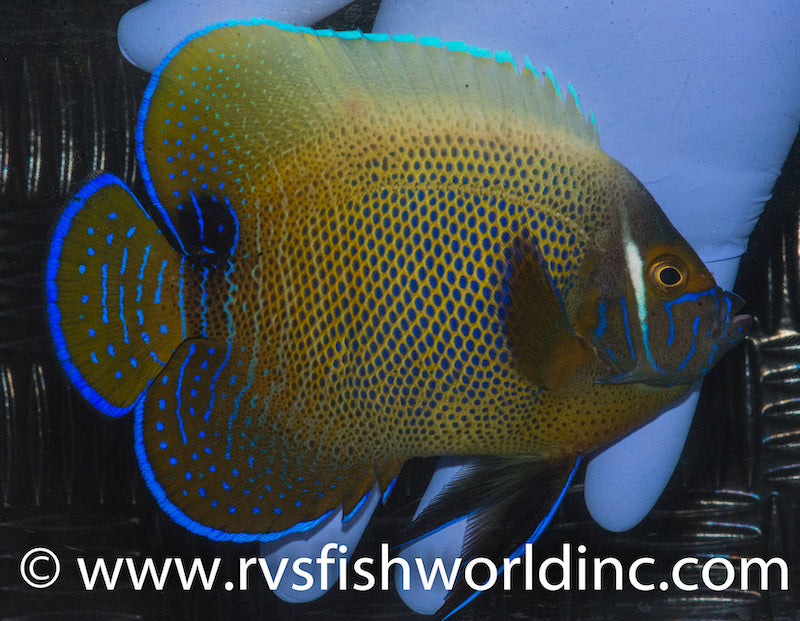 This is precisely the situation we find ourselves in with this new hybrid angelfish which is a reciprocal crossing of the blueface angelfish and the sixbar angelfish. While the hybrid specimen from last month bears more resemblance to the blueface angelfish, indicating that its mother was a P. xanthometopon, the newest example looks more like a sixbar angelfish which points to its mother – the provider of the egg – being a P. sexstriatus.

You can clearly see how these two specimens are quite similar in overall appearance but their features do lean towards one species or the other, especially in the markings of the face and the tail. On the left is the new sixbar x blueface hybrid angelfish, shwoing a prominent white head stripe and blue tail stripes of P. sexstriatus, and on the right is the blueface x sixbar angelfish with a clear yellow masking around the eyes and a mostly yellow tail of P. xanthometopon.

We know that these smaller details might be getting into the weeds but this is certainly an exciting comparison for the most avid rare fish fanciers, even if there aren’t enough of these hybrids to observe and document usually around once per year. It would be really fascinating to see these reciprocal hybrid crosses swimming in the same tank, and even more pie in the sky if these two specimens could be back-crossed which would result in 25% blueface angelfish, 25% sixbar angelfish, and 50% something very, very strange and unique.

Since the hobby is just barely dabbling in breeding pure strains of reef fish, the back crossing of complimentary reciprocal hybrids is firmly in the realm of hypothetical speculation, but it does make for a very fun thought experiment. We can’t help but wonder if there’s anything that RVS Fishworld is doing in particular to come across angelfish hybrids with this cadence, or if it is simply a matter of greater awareness – and value – of these fish in the saltwater aquarium hobby which is bringing them to light more frequently.