The wide band anemonefish, Amphiprion latezonatus, is a rare clownfish which is endemic to a limited range in Australia. Beside the wide white bars, ‘Latz’ clownfish are also recognizable by their beautiful blue lips.

This species is often found in cooler water and even when it was available wild collected, it was always a scare species but now it has become really rare in the aquarium hobby. A few years ago, Arie de Jong from De Jong Marinelife was able to obtain a wild caught pair with goals set on breeding them, he decided not sell this pair but kept it in De Jong Marinelife Nursery unit.

Years passed and they were kept at 18°C but nothing really happened, the fish were healthy but never spawned. In the beginning of 2021 I got the opportunity to start working as a marine biologist and set up a new breeding facility for De Jong Marinelife.

We created new plans to build a complete new ornamental fish breeding facility and started to change the entire breeding protocols. I also started with conditioning the breeding pairs. The pair moved to a new tank in June. They share their tank with a pair of Calloplesiops altivelis and a lot of red bubble tips anemones (Entacmaea quadricolor).

I changed the photoperiod to 14:10 (14 hours light and 10 hours night) while temperature was slowly raised to 24°C to stimulate spring together with zooplankton blooms. The broodstock diet changed, using only fresh ingredients, a lot of variation and the pair was sometimes fed 10 times a day. At last we also stared adding hormone inducing amino acids. It didn’t take long before the abdomen of the female started swelling and finally on the last day of July a big and healthy spawn was laid to the tank wall. 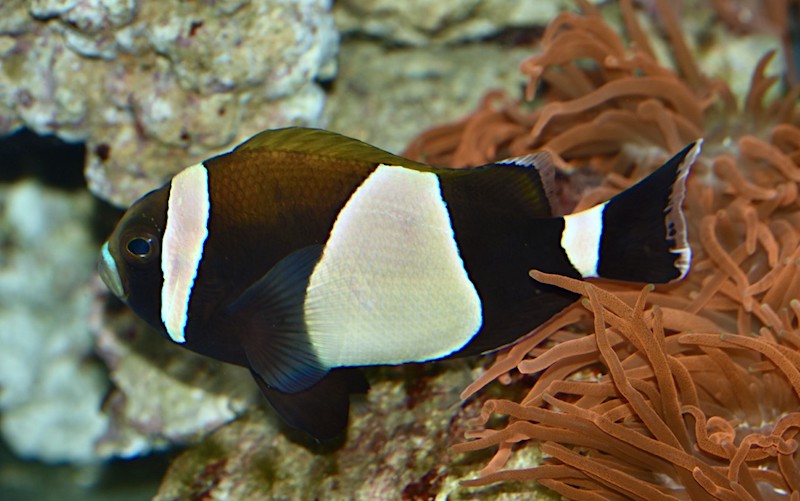 The eggs were bright yellow with a clutch size of almost 15 cm (~500 eggs) and it wasn’t long before the larvae hatched. At day 7 the eggs were almost silver and you clearly saw the embryonic eyes but it wouldn’t be until day 11 that they hatched. Because this was something completely different than breeding A. ocellaris, we decided to leave the eggs in the tank and place a larval snagger and on the eleventh day we were greeted in the morning by healthy big dark larvae.

The larvae were placed in a rectangular larval rearing tank. In the future, we going to use new techniques like black round tubs but for now we had to deal with the existing tanks and equipment. Temperature was as kept as low as possible, 25°C. The tank was on recirculating which make it difficult to obtain low temperatures. In the future, we definitely will try to raise them on lower temperatures.

The larvae were very active, swimming like crazy ones and never really showed the Head Bumping Syndrome. They grew fast and metamorphosis showed up at day 14. The first head stripes showed up and it didn’t take long before other stripes appeared. They were fed with rotifers, copepods and after 7 days with enriched Artemia nauplii. Water was tinted with Rotigreen Omega. After day 4 they were also fed with Otohime.

I was very curious if the juveniles would be deformed. Although it’s still very special and unique it isn’t the first time someone bred A. latezonatus. After some personal communication with the few other breeders who worked with them I learned a lot about why many of the first captive bred specimens of A. latezonatus were deformed.

How would ours turn out? We didn’t use even new larval rearing techniques. I prepared for the worst but after moving almost 100 juveniles to our grow-out area I was quite surprised. A very few juveniles have a deformity at the lower jaw but most of them are good but we can do better. They are probably all misbarred. They are still young and stripes still can develop but we assume they will stay like this.

Next time we will kept temperatures lower and place them in our new black round tubs, cooler water, new LED lightning and use different copepods species. The pair is still active and last week we receive a new wild caught male specimen. If we can find a wild caught female, we will create a second pair. Another possibility is to pair the new wild caught male to one of our tank bred juveniles. Genetically this will also be a good pair.

We are really proud with this results after working hard the past months to changes procedures, implementing new techniques and species, training staff and build a complete new hatchery. The entire team was looking forward to bring this news after we recently published our first “species first”, tank-bred Calloplesiops argus.

Also, a big thank you to the hatchery aquarists! Maarten, Marloes, Stefanie, Sanne, Kevin and Sander, thank you! They had to learn a lot in a very short time. They work hard and really go the extra mile for our larvae. We are turning them from unexperienced to commercial breeders in a very short time. Thank you for your efforts, determination, care and passion, late evenings collecting larvae and eggs and the endless siphoning of larval tanks.

Big thanks to Tom Verhoeven for sharing his journey of breeding the coveted wide banded clownfish.

Starfishes and Other Echinoderms Book Review