The Jump SK-800 Skimmer is a new device from Maxspect that we learned about just around two months ago and we’re lucky enough to have a review unit to start putting through its paces. Virtually all the features of the previous Jump SK-400 are nearly identical in the larger model with the device being simply larger and more powerful in every aspect.

It might appear curious that the Jump SK-800 only draws 200 more liters of air than the SK-400 but it does work out to maintaining around a 1:2 ratio of air to water which is considered by many to be one of the sweet spots for efficient foam fractionation in a protein skimmer. The only other design change from the smaller to the larger model is that with a two inch bigger footprint of 10.5 x 9.75 inches Maxspect was able to orient the pump perpendicular to the sides of the base compared to the diagonal placement in the SK-400.

One detail which does appear much improved is the water level height adjustment on the outlet of the SK-800 which is made of thicker plastic ratchet with larger teeth and should hold up longer and be less affected by biofouling than the first whisper-thin iteration. The cup is understandably larger, as is the bubble diffuser ‘bell’ which pressure fits into the the outlets of the Duo Turbine 12K pump, and the only other major change is that the entire venturi/aspirator valve assembly is completely made of soft silicone so there’s even less parts to manage during disassembly.

Speaking of maintenance, we’re in love with the quick disconnect latch mechanism which holds the body of the Jump SK-800 firmly to the base, which connects to a double stack of vibration absorbing silicone material of two separate densities. We welcomed Maxspect’s experimentation with the sliding latches of the Aeraqua Duo’s cup removal mechanism but the 0-ring equipped pressure fit of the jump skimmers is simple and even easier to remove, especially with just one hand.

It’s no surprise to see the same style air silencer as before but simply larger, the controller is exactly the same with the same power adjustment and feed mode, and the auto-shut-off float switch (which we believe should be standard issue for DC powered skimmers) is also easily inserted and removed into the lid of the cup for easy maintenance. Aside from the absence of wireless control and programming the biggest difference between the Aeraqua Duo and Jump skimmers is that you can’t get all the fancy fine tuning of recirculation adjustment which is cool to have on a spec sheet, but questionable in its usefulness in all but the most specific applications.

Perhaps the most important feature and the hallmark of Maxspect’s Aeraqua Duo and Jump protein skimmers is the use of a secondary row of needle like pins to add another layer of air bubble chopping and mixing that has been thoroughly demonstrated to generate a whip-cream of skimmate. Curiously while the Aeraqua Duo 600 might be the flagship in Maxspect’s protein skimmer models the SK-800 is rated for larger tanks and more volume than the original.

Now that we’ve thoroughly analyzed the Maxspect Jump SK-800 in our hands and next to its adored and long-running little brother we’ve got a good feel for where the Jump eight hundred fits into our portfolio of protein skimmers and we’re eager to put it into service. Stay tuned for a full review article and video in a few weeks once we’ve learned how much it will cost and more importantly, thoroughly tested Maxspect’s new affordable and pragmatic protein skimmer design. 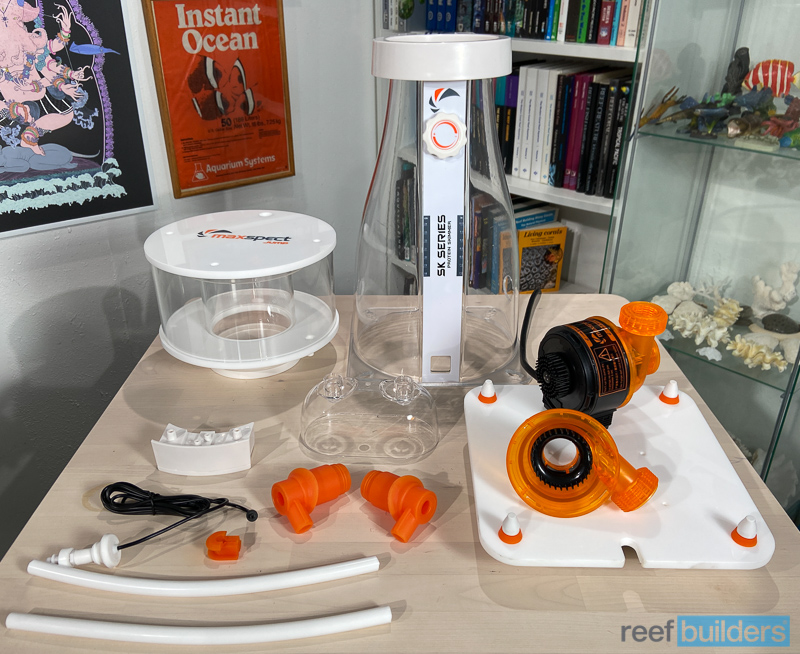 Echinopora forskaliana, a Rare and Unique Coral from the Red Sea