The Hydros XP8 is a controllable power strip but just one quick look and it’s easy to see that there’s a little more happening under the hood than just a switchable hub of outlets. This heavy duty power center sports eight individually controllable outlets that are rated for up to 8 amps each with a maximum load of 14 amps total but that’s not all.

One big differentiator of the Hydros XP8 is that it can connect in a variety of ways including classic wifi for all the basic functions, bluetooth mostly for status and reading, and the wired command bus port for expanding to other Hydros components which are also both wired and wireless. While the Hydros XP8 is not a fully fledged controller with built-in inputs it is an intermediate since you can connect any number of Hydros accessories such as the X3 and/or X4 which include Sense and probe ports. 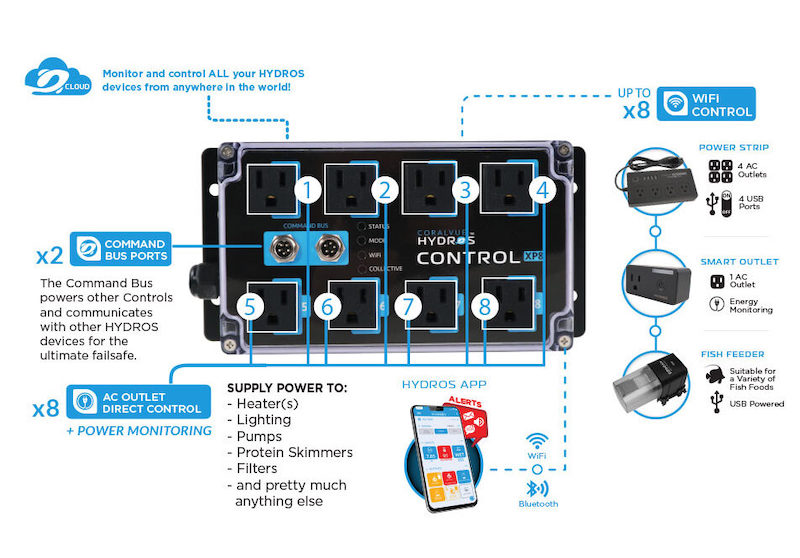 At $279 the CoralVue’s Hydros XP8 is a great starter component to get started with a decentralized controller system and we very much appreciate that it doesn’t rely on a noisy fan to keep temperatures down as it’s entirely passively cooled. Overall the Hydros XP8 is much more robustly built than comparable power center units and is a great option for controlling a variety of aquarium devices and accessories like skimmers, filters, pumps, and even dosing pumps and automatic fish feeders. [CoralVue]

Coral Colonies are So Fun to Unbox [Video]