The Rainbow Splice Acro is all Grown Up! [Video]

It’s been just over three years since Reef Raft Canada first introduced the spectacular Rainbow Splice Millepora Acro to the aquarium world and it quickly shot up to become one of the most desirable strains among coral stick collectors. The first frags of the Rainbow Splice Acro sold for upwards of $1200 for very small genetic sample-sized piece and although the price hasn’t really gone down at least the size of the frags being offered has increased to be more in line with something you can see without a magnifying glass.

At most shows there’s usually one or two coral vendors who specialize in the top shelf Acropora strains so we’ve seen them out in the real world but this week we were fortunate to spend some time with a respectable grown out Colony. At roughly five inches in diameter the large specimen that now resides at Aquatic Art has a lot to look at with an even blend of corals being mostly green on the dies with a strikingly colorful streak of the base raspberry pink coloration cutting right down the middle of the branches.

With so much material to work with Aquatic Art owner and veteran reefer Cris Capp has a lot of branches with which he will be able to explore and experiment in how mostly green branches develop, how mostly pink branches develop, and which environments and conditions brings out the best of both colors. Most exciting of all will be the discovery and observation of what happens when you splice a little bit of the green with a little bit of the pink and which pigment appears most dominant as it spreads throughout the newly grafted frags.

One of the details that is most impressive about this colony of Rainbow Splice Millepora is that it was acquired from Two Guys Corals at ReefStock 2020, pictured above left, and grew to a very respectable in only two short years! Don’t be discouraged if your corals don’t grow this fast, very few of our Acros do, but you’ll be relieved to know that his reef tank was professionally maintained by Aquatic Art with over two decades of reef aquarium experience.

Although the sticker price of Rainbow Splice Millepora frags hasn’t gone down very much, knowing how fast this coral grows and with many SPS coral specialists working with this coral we project that supply will soon start catching up with demand and there should be a lot more of it out in the reefing world in due time. Big thanks to Aquatic Art opening up their shop for a nice video spotlight of their incredible new coral and we hope that the Rainbow Splice Millepora spurs a boom in reefers working with GFP-infected/grafted corals like this in the future. 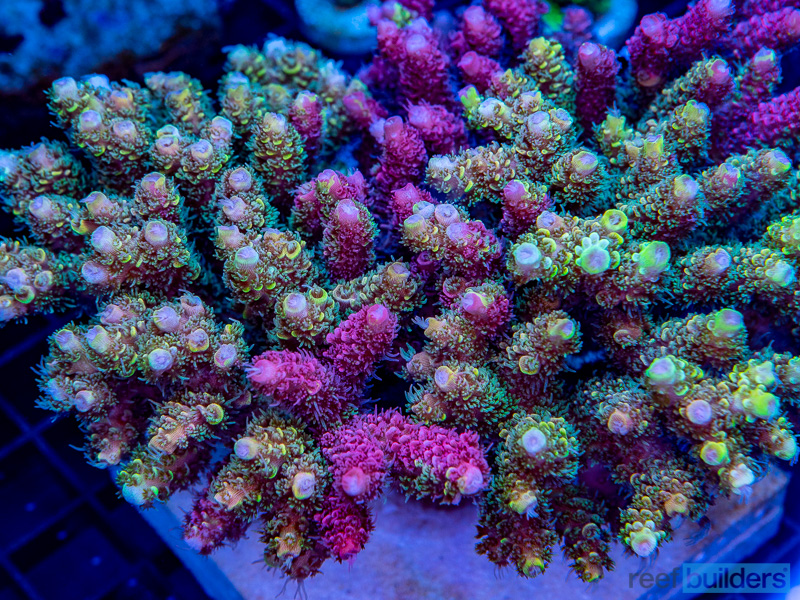 May 11, 2022
Site Sponsors
Reef Builders is Supported by: