Elos Elite3S gets the full unboxing and teardown treatment 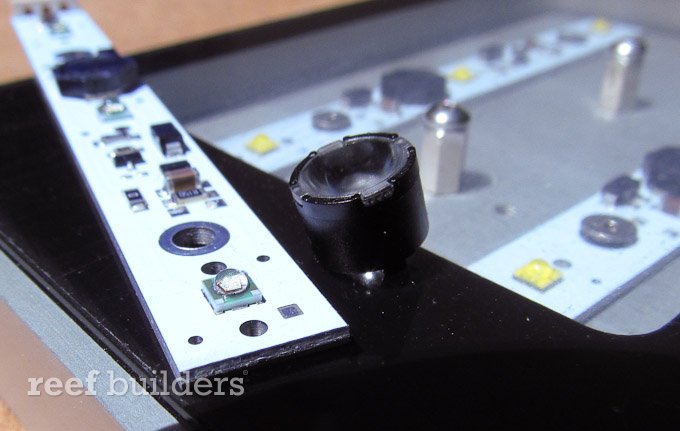 The Elos Elite3S is one of the most high profile product unveilings of InterZoo 2012 and what we saw certainly did not disappoint. A bevy of mounting options, modular LEDs and secondary optics, active and silent cooling coupled with the customary Elos fit and finish makes the third generation Elos Elite3S one of the best European-made LED aquarium lights. Continue reading to see how our intimate one-on-one photo session with the Elos Elite3S yielded a a beautiful forward-thinking LED light fixture with an unexpected surprise.

The machined aluminum enclosure of the Elos Elite3S will be familiar to JBJ Unibody and Apple Macbook Pro users. The single cooling fan takes in air from the underside of the housing and it send the air up to the top where the airflow can cool the thick cooling ‘fins’ but the cooling system is completely isolated from the electronics. The fan may eventually suffer from effects of moisture and salt but there’s no other real option if you want to actively cool a pretty light which is also super thin and attractive, at least this component is easily replaceable.

Unlike previous generations of Elites and Elite Xps, the Elite3S is fully accessible, modular and upgradeable. Allen screws easily remove to give users full access to the modular LED strips which come in white, blue and red and which are compatible with little micro lenses for secondary collimation and deeper penetration of the light. The four channels of LED are clearly marked although we are still not super sure how to manually adjust these aside from delving into the menu an attached Tempo Evision module, so no built-in or on the fly adjustments that we know of.

Perhaps the biggest little surprise we found while taking apart the Elite3S was the existence of two little grooves on the top side of the fixture which are not channeled with the cooling fins in any way. One of these little grooves has a tiny hole pre-drilled right down to the on-board driver which hints at a future potential upgrade, maybe in the form of a little wireless chip to fit in that groove?

The best part of groping this particular Elite3S was to stack it up against the first generation Elos Elite which featured Cree XRE LEDs, no controllability and no access to the innards. People always ask Reef Builders what is new, exciting and cutting edge but changes in any industry and technology are usually incremental and slow. It’s hard to see how far we’ve come without some perspective but seeing the four year old Elite next to the spankin’ new Elite3S is a great way to put the changes in perspective.