AquaticLife had the new 46″ ES LED fixture on display at the Global Pet Expo. In person, the fixture makes for a very sleek and elegantly simple light. A single power cord feeds the nearly four foot long light. Alongside the power cord is a USB port, so that you can utilize the AquaticLife PC dashboard software to customize the light programming to your liking. 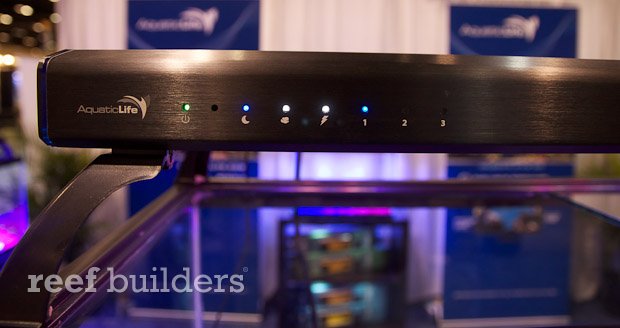 Once you are done programming it, you can use the included remote control to initiate your own custom photoperiod, storm, and cloud simulations. The length of those simulations can also be defined, so that the light intensity returns to the normal photoperiod after a set amount of time. The Lunar schedule is also easy to adjust to a preferred intensity and spectrum.

The four foot AquaticLife ES LED fixture is essentially a giant anodized aluminum heatsink. No fans were needed to keep the LED’s properly cool at full intensity, therefore no noise whatsoever. As the pics suggest, frame mounts are available. But you can also suspend it. The internal LED panels come with disconnects, making it easy for the user to repair the fixture if required. 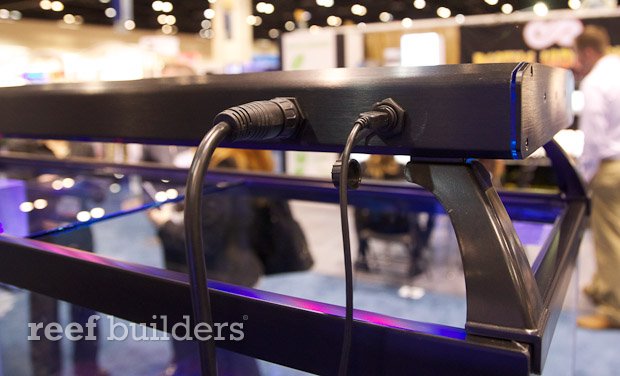 The 46″ AquaticLife ES unit runs at 234W at full power, while the 34″ pulls 156W. More details can be found here. The dashboard will report actual electrical usage, based on your defined photoperiod setting. The white XPG, blue XPE, and Royal Blue XPE Cree led’s have 90 and 100 degree optics installed. The Red XPE diodes do not have optics, for wider dispersal and better blending.

In a market full of modular LED systems, it is refreshing to see a company release full sized fixtures for the popular 36″ and 48″ tank lengths and AquaticLife may even offer a 72″ fixture in the future. Considering they are one of the last companies to make a 72″ T5 fixture, there is definitely be a niche to fill for those 125 and 180 gallon systems out there.