If you have a real yen for marine angelfishes but lack the tank space to accommodate one of the large iconic species, such as the queen angel (Holacanthus ciliaris) or French angel (Pomacanthus paru), you’ll be pleased to know that some really beautiful angelfishes actually come in fairly small packages.

Of course, I’m referring to the dwarf angelfishes of the genus Centropyge. One of the dwarf angels that I would give high marks for its reasonable degree of hardiness, stunning good looks, and overall aquarium worthiness is the coral beauty (Centropyge bispinosa).

Somewhat oval-shaped and reaching about 4 inches in maximum length, C. bispinosa is deep-blue overall with yellowish- or reddish-orange streaked with blue on the flanks. However, there is considerable variation in coloration and patterning among individuals. Some are predominately blue with just a hint of orange; others exhibit a much greater degree of orange, with blue relegated mostly to the head and unpaired fins. The gill covers feature sharp rear-facing spines.

The coral beauty feeds primarily on algae and small invertebrates, so its menu in the aquarium should consist of marine-algae-based foods supplemented with small, meaty items. Several feedings spaced throughout the day are preferable to one heavy feeding. 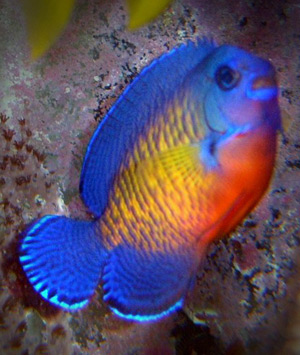 I’ve kept several specimens over the years, and the majority were fairly reliable feeders, accepting most standard aquarium fare, such as frozen herbivore formulations, algae-based pellets and flakes, mysis shrimp, and finely chopped seafoods. Some, however, may take a lot of coaxing with different foods before a feeding response is elicited. Be sure to ask your dealer to feed the specimen in front of you before buying.

Also, in common with many other Centropyge species, C. bispinosa has the tendency to pick, nibble, and graze throughout the day. Therefore, a well-established aquarium system with ample high-quality live rock and sufficient growths of algae is essential for its long-term maintenance. A “sterile,” newly setup aquarium is not the ideal home for a coral beauty or any of its congeners.

The coral beauty doesn’t require a great deal of open swimming space—and it certainly doesn’t need the hundreds of gallons that must be dedicated to larger angels. Given its demand for ample live rock to graze upon and hide in when it feels threatened, a medium-sized system is best. I wouldn’t recommend going much smaller than 55 gallons.

The coral beauty can be best described as moderately aggressive. It will coexist peacefully with most dissimilar species, but it may squabble with tankmates that are too close in size, color, or body shape. Combining C. bispinosa with others of its own species or genus is also asking for trouble, especially in smaller systems, so it’s generally best to keep them one to a tank.
Of course, a coral beauty should not be housed with piscivorous species large enough to swallow a dwarf angel.

With respect to adding a coral beauty to a reef system, I would think twice. This species’ constant nibbling and picking behavior may extend to coral polyps and other sessile invertebrates, which can cause damage or, at the very least, discourage the inverts from expanding fully. Again, the impact of this behavior tends to be more troublesome in smaller reef systems where it will be focused on fewer specimens.