Pieter van Suijekom’s 20 foot reef tank has been in operation for the better part of a decade and in that time it has become something of a legend. This 6 meter long reef tank with a concave front glass panel is absolutely packed with reef fish and corals with a panorama that absolutely sucks in its viewers.

On our way to Germany for InterZoo 2016 we stopped by this jaw-dropping display in Rotterdam, Netherlands with our local guide and Reef Builders contributor, Tanne Hoff. One thing that is particular about Pieter and his reef tank is that instead of letting it stay one way and grow into a mature mass of corals, Pieter prefers to overhaul the entire reef on a periodic basis.

On the one hand, this means that his reef often has that freshly aquascaped look. But on the other hand, with a reef tank this large, this practice of frequent ‘remodeling’ prevents the accumulation of detritus in any great quantity, and it allows for pruning and curation of the corals, most of which can be removed and treated or groomed if necessary.

The most recent restructuring of the reef saw the aquascape become greatly switched up. A semi-massive reef wall has been completely revamped to be much more open, using much less rock, and resulting in a very playful creative aquascapes with plenty of arches, caves and swim throughs. This is obviously great for permitting water flow through all parts of the display but it also makes a fun playground for the fish to frolic in and swim through. 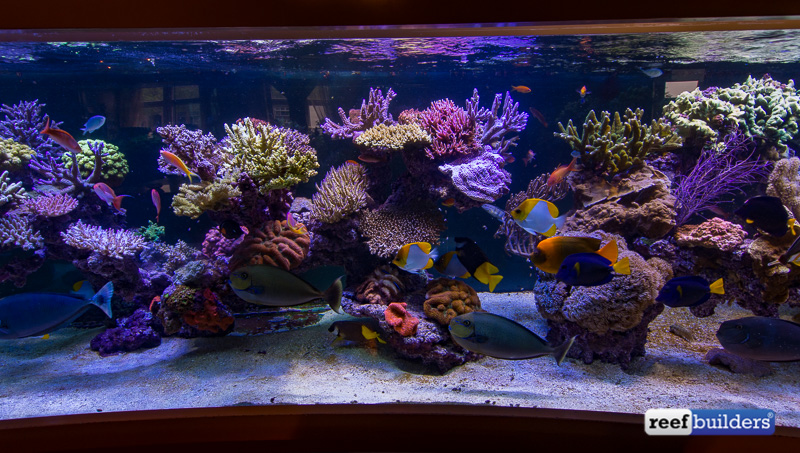 And let’s not forget about the Pieter’s expansive fish population. 6 meter Pieter’s reef tank is chock full of large and showy fish, ranging from schools of purple tangs, big showy vlamingi tangs, and exceptional specimens like a fully grown captive bred Clarion angelfish, to gem tangs, and a nice assortment of anthias and wrasses.

Most recently Pieter has acquired some fantastic non-photosynthetic Muricea and Heterogorgia from Ecuador. These are among the first of their kind to be made availabel to the aquarium hobby, thanks to Dejong Marinelife’s Ecuadorian collection station, and they come in a wide range of impressive colors which we’d love to see stateside.

Moreover, with such a huge area of living SPS coral polyps, Pieter has rolled the dice with a pair of blackfin butterflyfish, Chaetodon melapterus, a forbidden beauty from the Red Sea which is an obligate coralivore, but which some determined hobbyists have rarely succeeded in weaning over to prepared food.

Seeing this kind of expansive reef tank, with the resources and capitol to stock it with high caliber fish and corals is truly an experience for reefers like us. We did our best to document the entire aquarium in pictures, but with so many corals and fish, and so much reef to look at, it’s quite a challenge to accurately convey the grandeur of 6-meter Pieter’s complete reef display.

Thankfully, a new video recently shared by Arthur van Straten shows 6-meter Pieter’s reef tank looking particularly sharp, with some close ups of the most recent acquisitions. It’s wild to think that any of the three foot or one meter sections of this endless reef would make a fascinating display on its own and it’s encouraging to know there’s reefers like Pieter out there that are crazy enough to put together dreamy reef tanks like this.