A Visit to The Horniman Museum and Gardens

During the early days of the hobby there was sort of a barrier that existed between hobbyists, public aquarists and researchers that only some individuals like Bruce Carlson crossed. As a result, at MACNA V in 1993 in Toronto, many of us were delighted and enthralled when Dr. Robert Richmond agreed to speak to us on the spawning of our beloved sps corals and how this one day could replace the rather tedious process of fragging them, which at the time, was pretty much in its infancy.

Little did we know that it would take approximately 20 more years until Jamie Craggs at the Horniman Museum and Gardens in London would succeed in showing that this was possible on a large scale in a captive system. While some of his work has been presented previously on here as well as during his presentation at MACNA, I was lucky enough to get to spend a few hours with him on my recent visit to London to speak.

I met Jamie at MACNA in Denver two years ago when he spoke and was lucky enough to get the opportunity to visit his research due to his friendship with David Saxby. It is funny that just about everybody in the hobby does know everybody else by at most 3 degrees of separation. So knowing what Jamie was working on from his talk I was delighted when David said we were going to spend the afternoon there and know Jamie’s personality and knowledge I knew there would be much to be learned.

For those of you unfamiliar with the Horniman Museum, it is one of the oldest natural history museums in England and has been in operation since Victorian times. It is the result of its founder Frederick Horniman collecting artifacts of natural history and offering visitors to his home the opportunity to see them.

But from an aquarist’s point of view, it is especially interesting as it still houses some of the anemones that were some of the first invertebrates kept on record, (still display the same species, but not the same specimens). If they did that really would be something. Phillip Henry Gosse discussed these anemones in his book published in the 1850’s, so this museum is not just for housing old natural artifacts, but has shown an interest in marine life since its inception.

So considering that it had such an auspicious start, is there any wonder that it is also at the forefront of coral reproduction? In this regard, Jamie has been interested in coral reproduction for over 10 years, and like many of us has learned that success and progress in understanding sps corals and their many secrets takes time.

During his work and research Jamie has found a lot of things that are relevant to us hobbyists and that down the line may help us significantly. However, I should point out that Jamie is part way through his Ph.D and is also publishing several papers in this area, so I am only able to include general information rather than specifics, so that I do not interfere with any of this.

One of the first things that Jamie found and that may be relevant to us, is that there is a lot more variability in the water chemistry in different areas of the ocean and that parameters may change seasonally. That is the salinity, temperature, nitrate, phosphate, alkalinity and calcium values to name a few are different if you are in Australia on the Great Barrier Reef, in Singapore or in Guam and these values will vary some if it is winter versus summer.

However, the variability over short periods like days or weeks is relatively low. And Jamie tried to limit the potential for testing error by having all of the water samples he retrieved sent into Triton for ICP testing. By doing this he felt it more likely that any differences would only be the results of differences in the water itself, rather than in the testing procedure.

Blackout blinds are present on these tanks so that no light enters that tank that does not mimic what is occurring on the reef from which it is taken. Since the reefs from which the corals were taken are 8-10 hours ahead of the time in England, the day night cycle is the same as these. That is, if it is noon on the reef they were on, it is noon daylight wise, in the tank they are in.

And while lighting and the appropriate lunar cycle have been found to be critical to induce a spawning event, providing proper coral nutrition has proven to be just as critical in order for eggs and sperm to be produced. While, I can’t discuss exactly what is being fed to the corals, as this information is in a soon to be published paper by Jamie, it was clear that the corals are fed significantly more and more often than any reef owner I know. 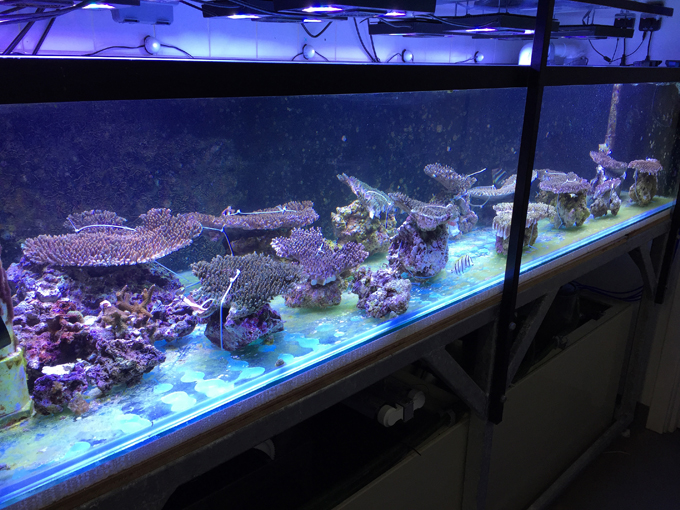 He also feeds not only a variety of foods, including live, frozen and processed and also feeds a variety of sizes so that the corals will find something that they for lack of a better term “like”. Due to the potential for this overfeeding to cause problems such as algae blooms, the tanks are only fed according to their ability to have excess nutrients removed before they become problematic. Feeding corals and the necessity for doing so has been a topic of debate for a long time.

However, after discussing this aspect of coral husbandry with Jamie and after doing more reading it is clear that many of us, myself included, are missing the boat by not feeding our corals. The typical thought process that strong light and fish poop are more than adequate for our corals health was quickly abandoned once I saw Jamie’s corals.

While light and fish waste may be adequate to provide most of the coral’s energy needs, from what I saw there it is clear that it does not provide enough nutritionally to allow for the corals to reproduce. Obviously reproduction requires a lot of energy and if we are not providing it, the corals may grow, but most will not reproduce in our tanks as a result.

For those of you who read the earlier article on Jamie’s success at achieving spawning or saw the talk at MACNA, the original spawning occurred after Jamie bonded several frags of one coral together and allowed them to grow together until they reached a size large enough where it was thought they reached a size large enough to have the critical mass in order to spawn.

However, while I was there Jamie broke off a branch of what looked like a Cali tort to reveal the egg and sperm bundles that were growing in its branches indicating it was able to reproduce at a smaller size than previously thought. As a result, more research needs to be done to see if different corals produce at different sizes and if good nutrition can overcome smaller size as well as a host of other questions.

And while getting the corals to spawn was exciting, just as important is learning what factors lead to proper settlement as well as how to maximize grow out once settlement did occur. In this regard, they have found that certain substrates as well as certain types of coralline algae seem to maximize settlement of the viable planula. They also found something interesting in that the offspring seemed to be rather indiscriminate in terms of settling on coralline algae and that in their early work they settled on just about any type.

They found that this may not be the best strategy however, in that they found that if the planula settled on a fast growing type of coralline the coralline would overgrow the planula before it could grow to a viable size. As a result, sine they are now confident of being able to get corals to spawn successfully and produce viable planula the next step is to find substrates and species of coralline algae that will maximize the settlement and long-term viability of the planula.

Right now getting the corals to spawn is still seemingly a once a year event, and to date the spawning has occurred approximately at the same time as it does for the corals from the reef from which the coral was taken. In order to try and get spawning to occur more frequently or in a more controlled manner, corals have been taken from a few different reefs ( Singapore and Great Barrier Reef) so that spawning can be observed at a few different times rather than just once.

In addition, what they did was tag a parent coral on the reef and then created a map of where these corals were on the reef. A large frag was then removed and shipped back to London for comparison. As the coral has grown, a frag from the London colony was divided in half and was sent back to S.E.A. Aquarium at Resorts World Sentosa to be housed in an aquarium replicating the one at the Horniman. The idea is to create a three way comparison for spawning times moving into the future. The frag was not reintroduced back onto the reef itself for fear of potentially introducing an unknown pathogen onto the reef.

The work that Jamie and his colleagues are doing is remarkable and may impact the reefs for decades to come, as well as impact the hobby. This research may not only help us better understand what happens during a spawning event, but also may help us better understand the conditions necessary to achieve it in our own reefs as well as to maximize its success in the wild.

If conditions continue to deteriorate in the wild, the corals we have in our tanks may act as a bank of sorts and may be a viable way to repopulate the reef on a much larger scale than we are doing now. After major bleaching events in the Maldives and Solomon Islands it is known that it takes a minimum of 7-10 years for a reef to even get close to its old vitality.

Understanding and using some of the information that Jamie is gleaning in his captive spawning experiments may one day help to expedite this process. In this regard the Project Coral, which is the name of this research project may be an important first step in helping to maintain the health of coral reefs around the world.
When we walked into the Horniman Museum and saw the stuffed birds and the overstuffed walrus I thought that this was a typical old museum and it was highly unlikely that a spoiled reefer like me would learn anything new. Little did I know that some of the most cutting edge research in coral reproduction was being done in such a place. As I go back over my notes and pictures I realize again that there is still much for me and us to learn.

Jamie is keen to thank the support from his various sponsors (EcoTech Marine, Triton, D&D The Aquarium Solution, Charterhouse Aquatics) without which the project would not be where it is today.

Follow the link to find out more about Project Coral and see some of the incredible spawning video footage.