Hands On With The Bixpy Jet Handheld DPV

The Bixpy Jet is a groundbreaking new tool which puts dive propulsion vehicles (DPVs) in reach of so many more divers and snorkelers. The handheld Bixpy Jet has the general form factor of a power drill, allowing swimmers and divers to fly through the water with the pull of a trigger.

We first spotted the Bixpy Jet through its Indigogo crowdfunding campaign which has since been successfully funded more than 300% over its initial goal of $40,000. Like As Seen On TV products, it’s hard to have total confidence in these crowdfunded products which may never see the light of day, but thankfully, Bixpy had a booth at DEMA where we were able to test one out for ourselves.
The power of the Bixpy Jet is much more than you would expect for such a small device, but this is one DPV which was made to power boats, stand up paddles as well as divers, so it’s got plenty of thrust to propel a diver underwater. Incredibly, the Bixpy is only priced at $750 with pre-orders going for $500 for about one more week. 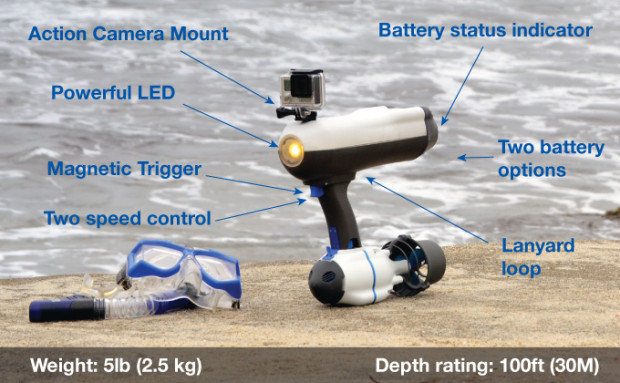 Of course there are tons of options with the Bixpy Jet, with different batteries which lock into the customizable motorized thruster. The standard battery can eek out two hours of use at the low speed of 1.8 miles per hour, and 40 minutes at the top speed of 2.5 miles per hour, while the smaller travel size battery manages a little more than half that run time.
The battery itself also has a built in LED light at the front, battery status indicator at the rear, and an action camera mount on the top. If you’re also into kayaking, SUP or simmilar activities, definitely check out the other options for these more demanding applications but we for one can’t wait to test out the Bixpy Jet while diving when it is released in March 2017. [Indigogo]
[/vc_column_text][/vc_column][/vc_row]

Mares Introduces The Kaila SLS BCD For Women At DEMA 2016

Face to Face With The One And Only Scribbled Watanabe Angelfish