13 Creatures To Photograph At The Murex Bangka House Reef

Guests staying at the Bangka Island hotel are in for a treat. The Murex house reef is only a fin toss away from the shore and full of interesting creatures to photograph. And regardless of where you’re staying, house reef dives are often inexpensive and great for testing out dive skills, and new photography gear.
We love an afternoon house reef dive to test out new lenses, camera settings, and lights because sometimes three dives a day just isn’t enough! Here are 13 creatures, including coral, you can find on the Murex Bangka house reef. 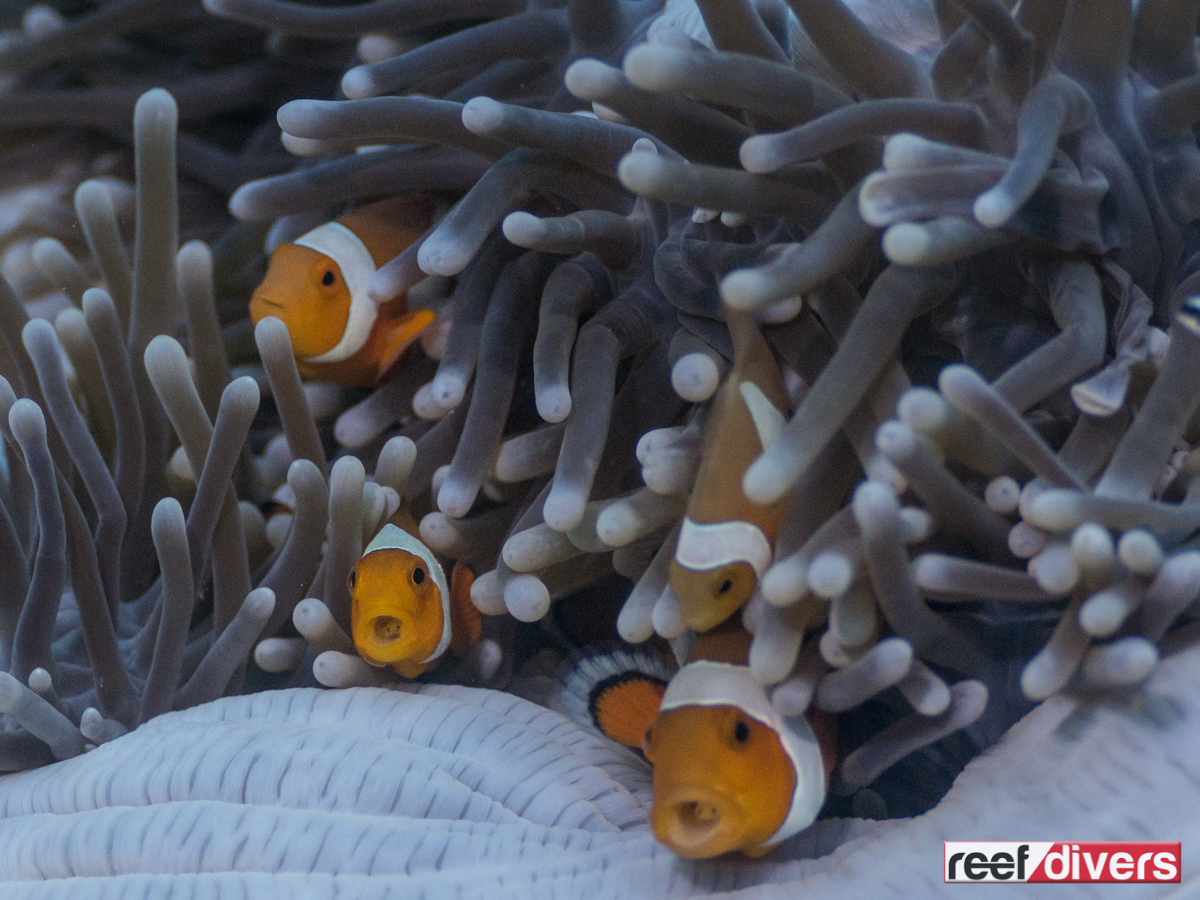 Clownfish are one of the most iconic creatures to photograph. But when you’re tired of photographing another clownfish with another anemone, look for clownfish with a gaping mouth and zoom in for a closer look.
Clownfish around Bangka Island can often be found living with a parasitic isopod feeding on their tongue! The tongue-eating parasite (Cymothoa exigua) lives inside the mouth of the clownfish feeding on the clownfishes tongue and mucus, YUCK!
Nevertheless, if you can time your photo just right you might end up with a couple of extra black eye peering out from a clownfish mouth. 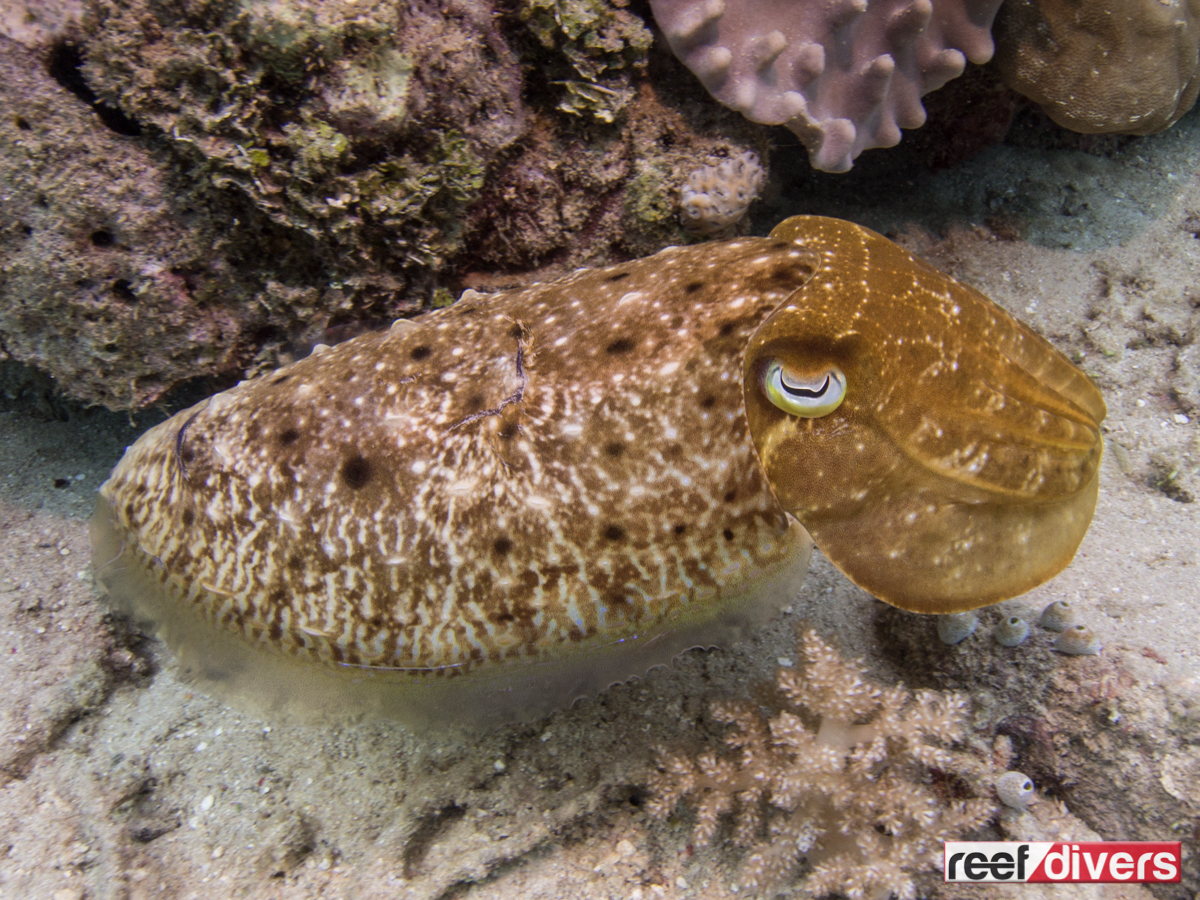 The broadclub cuttlefish is a master of disguise and full of personality. The cuttlefish can change the color, patterns and even textures of its skin in the blink of an eye. You might want to switch over to video mode for these color changing aliens!
Cuttlefish are shy animals that hide amongst soft corals, seaweeds, and rocky coral reefs. The cuttlefish can adapt their apearance to perfectly camouflage with surroundings. If you are calm underwater and don’t spook the cuttlefish you can usually stay within a few feet of these mesmerizing cephalopods. 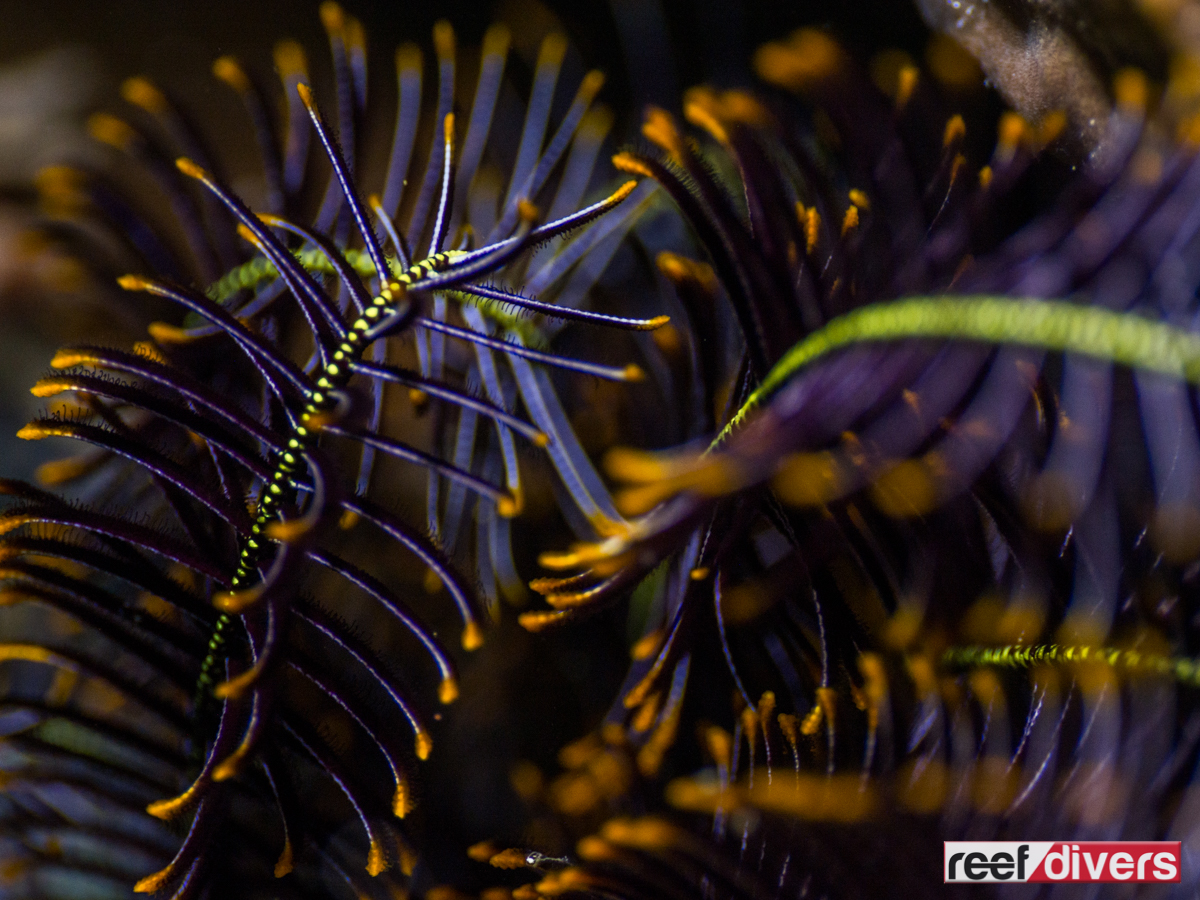 Feather stars are delicate colorful critters which make for an artistic photography subject. Feather stars have long sticky arms with thousands of feathery tube feet. They cling to the reef with hooked legs and wave their arms in the current traping plankton.
Feather stars come in pretty much every color imaginable, some having a solid color or several colors and patterns. Make sure to look closely at the main stalk of each arm for a perfectly camouflaged feather star shrimp, I have yet to photograph one! 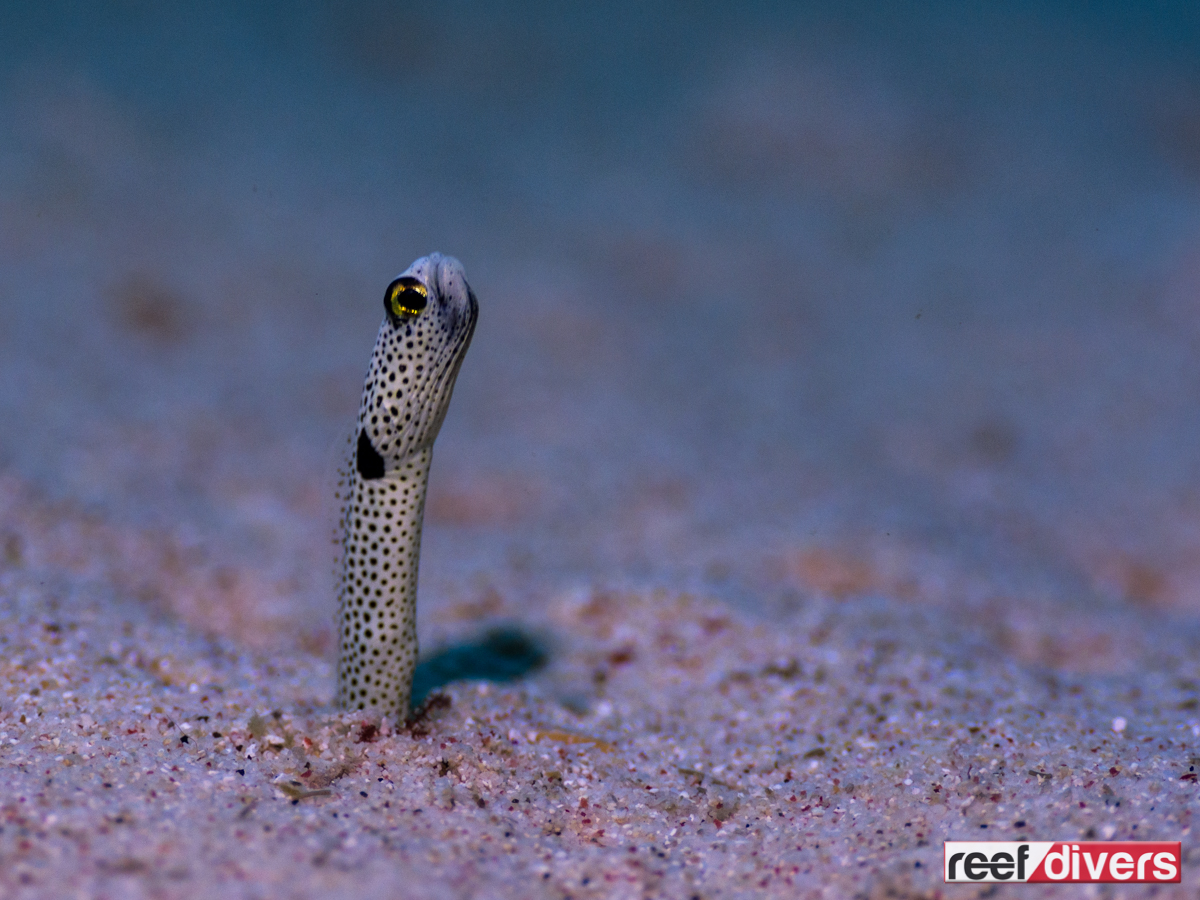 Garden eels are a skittish bunch. You will find groups of garden eels burrowed into flat sandy areas. As you approach you will see dozens of thin stalks start sinking below the sand. This is the perfect distance to stop and observe.
Wait for the eels to start growing from the sand before firing up your camera. Getting the perfect garden eel shot might require the use of your zoom lens, a keen eye, and patience. In the end, it’s worth it for that grumpy little face and buggy eyes. #GrumpyEel 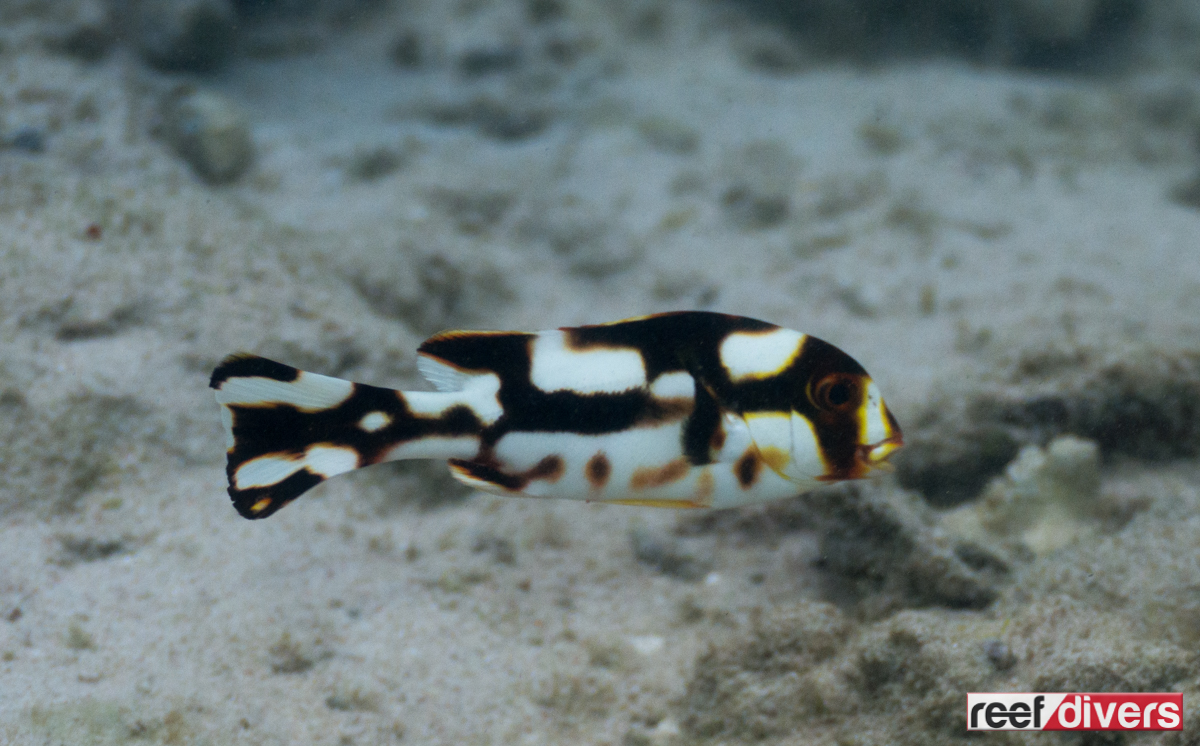 You may have noticed this feisty fish with distinct black and yellow inkblots. These patterns help the juvenile sweetlips camouflage in shallow rocky sunlit areas. The real treat is to find a tiny juvenile which has a wriggling swim undulating their whole body from side to side.
As this fish matures the black and white patches will grow into a striped pattern from head to tail. Adult sweetlips can be 70cm or 28in long and live in small schools above walls or near coral boomies. 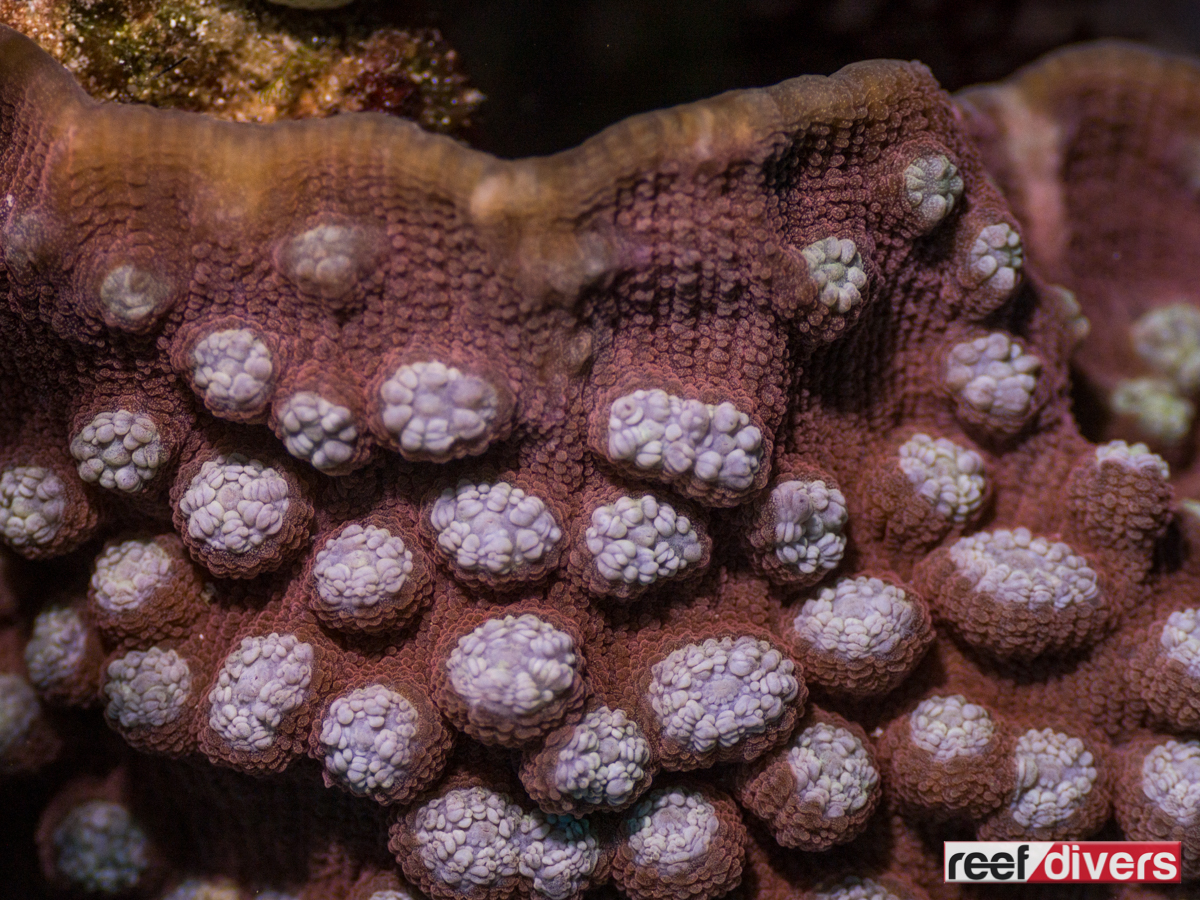 No critter list would be complete without at LEAST one coral! Coral colonies are made up of hundreds of tiny animals called polyps. Each polyps building a hard calcium carbonate skeleton called a corallite which becomes the corals home.
Mycedium corals have large round corallites shaped like a nose, and the corallite always faces towards the edge of the colony. Macro photography of coral reveals a complex surface and subtle speckled colors. If you want to know more about coral, check out our 20 stony corals from Indonesia post. 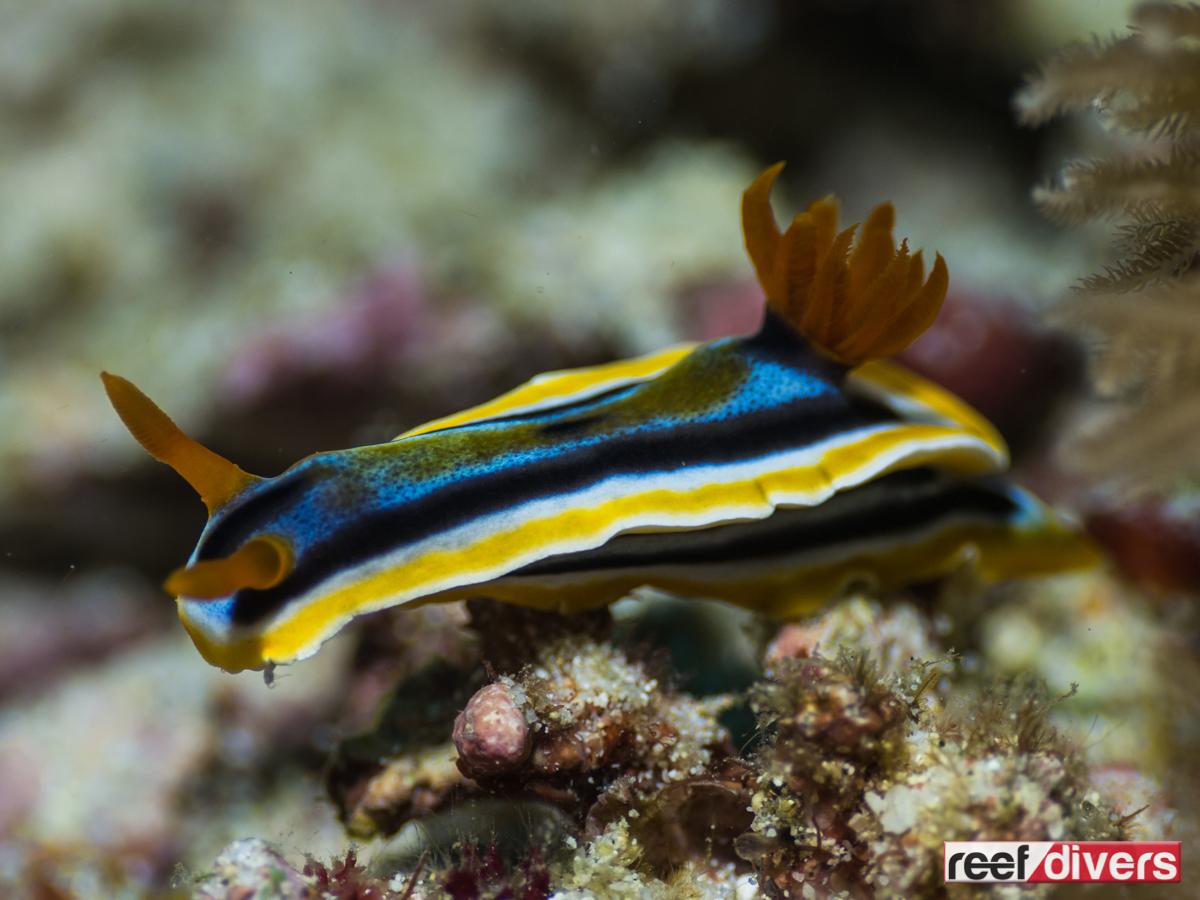 Nudibranch are the underwater equivalent to Pokemon. These colorful sea slugs are everywhere with over 2000 species worldwide it would take a while for a photographer to catch them all. Spend a dive looking for nudibranch on the Murex Bangka house reef and you will be amazed at home many different species you can find in a single dive.
Nudibranch make excellent photograph subjects since they are relatively slow moving, giving you time to set up the shot. Nudibranch have brightly colored patterns, flamboyant style, and curious feathered gills perfect for macro or close up shots. 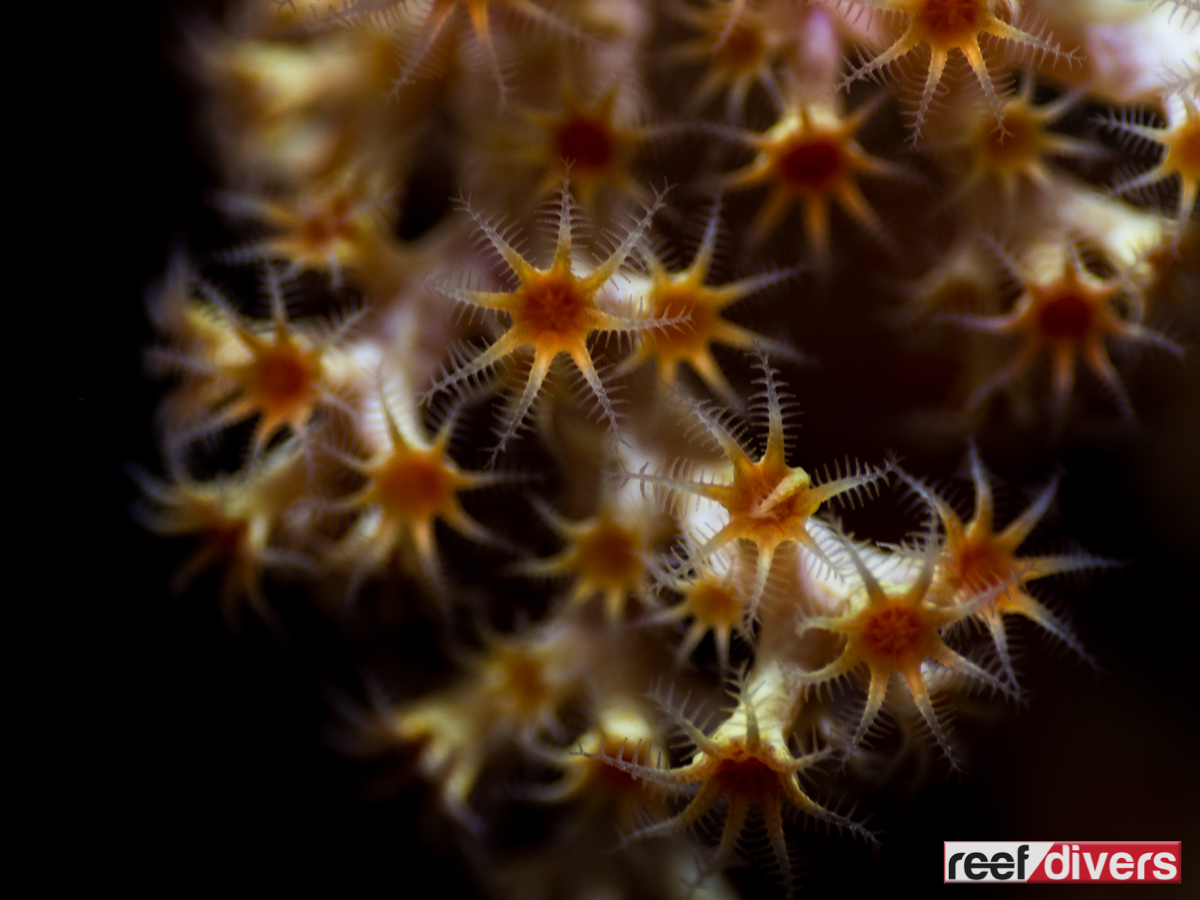 Did you know the biggest difference between stony corals and soft corals is the number of tentacles? Stony coral (Hexacorallia) polyps are built on a six-fold symmetry, while soft coral (Octocorallia) polyps are built on an eight-fold symmetry. Take a closer look at soft-coral polyps you’ll see there are eight tentacles, whereas hard-coral polyps will form in multiples of six.
Some stony corals like Gonipora have long soft flowing polyps, but that doesn’t make them a soft coral. Stony corals can have soft polyps but they still have a hard skeleton below. And upon closer inspection, Gonipora will have twenty-four tentacles. Octocoral soft corals will always have eight 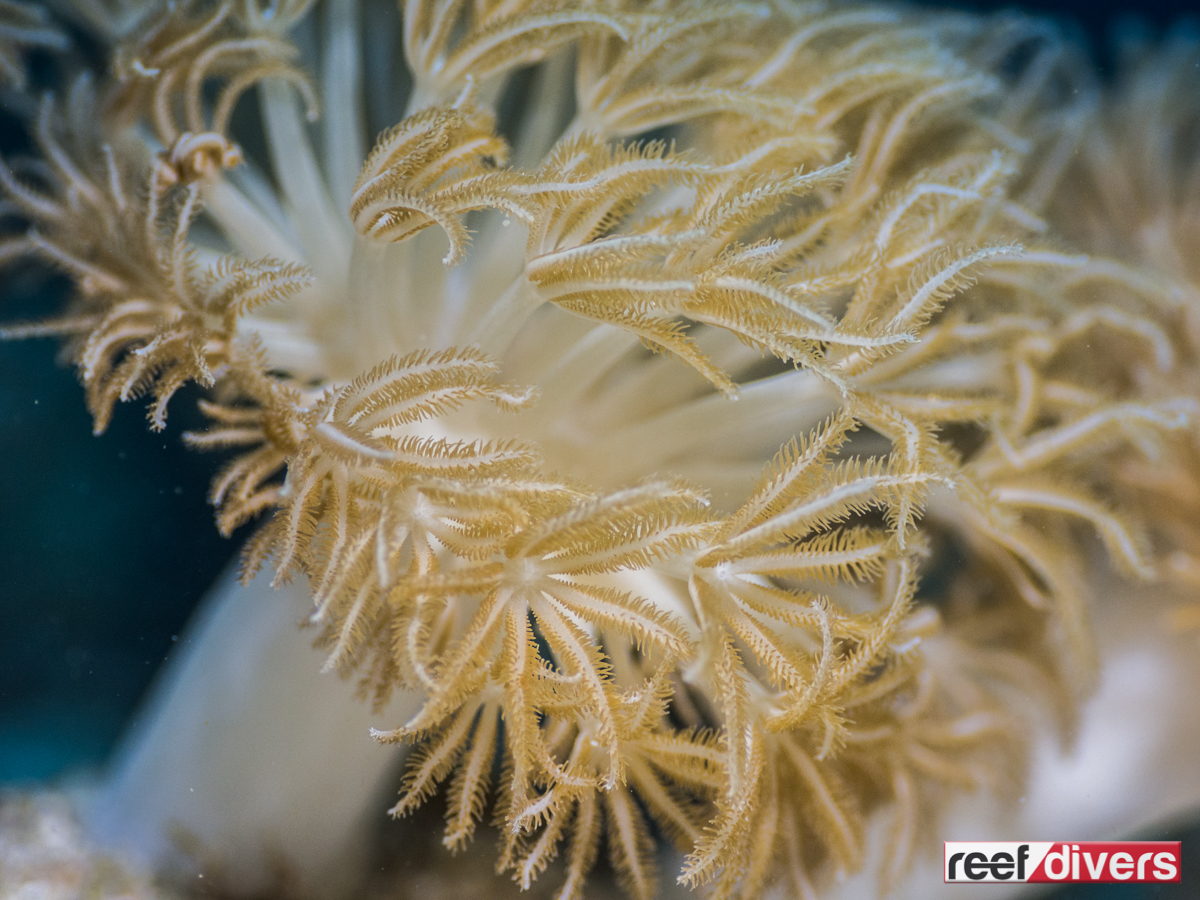 No, you’re not seeing things, that coral really is pulsing feathery hands, applauding your perfect photograph! Pulsing Xenia is a type of soft coral which has a thick stalk and many tubular pulsing arms.
Each of the eight tentacles is covered in short pineals which the coral uses to capture food. Xenia corals also host photosynthetic zooxanthellae algae like a stony coral and get energy from the algae. 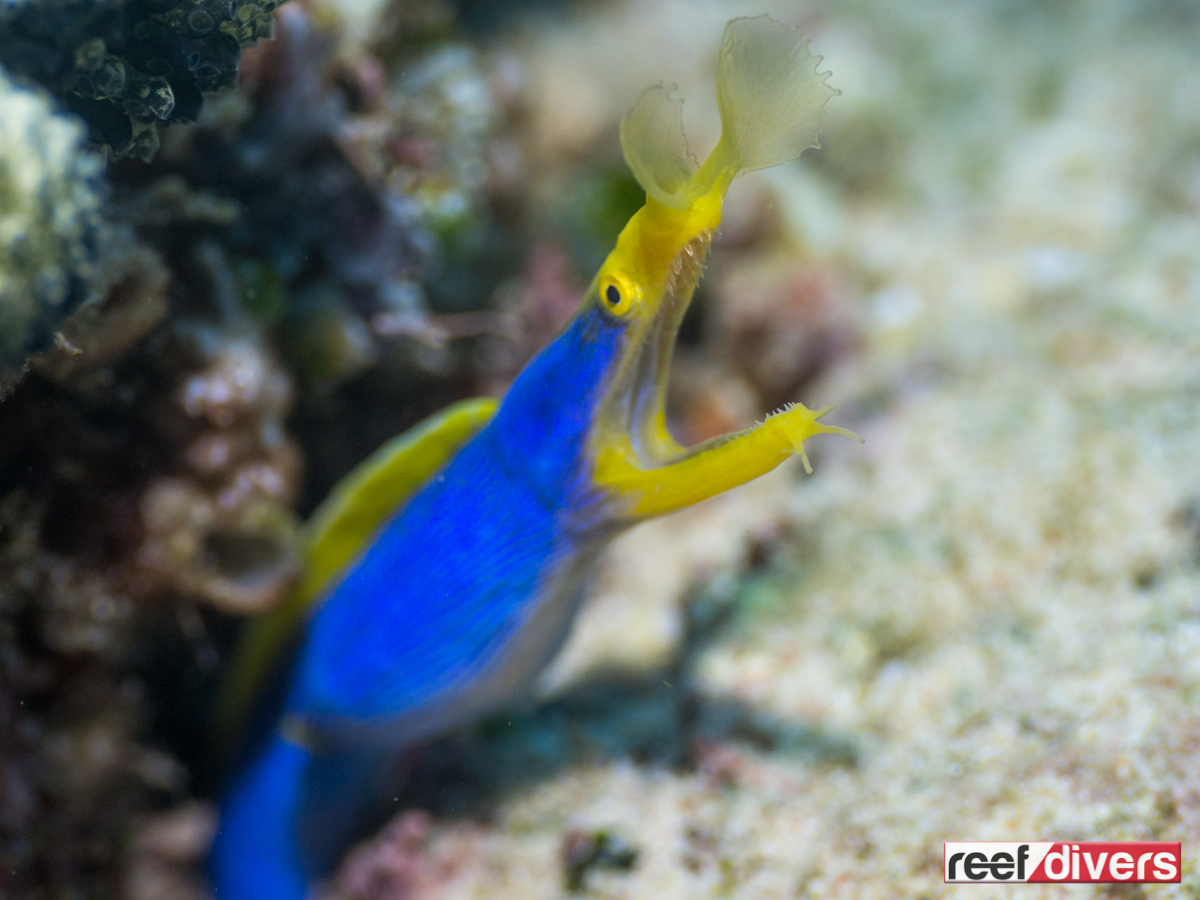 Ribbon eels are a common sight at the Murex house reef. You can find these slender moray eels tucked under a rock swaying their heads near the exit. Once you find a ribbon eel wait for it to start moving more and more outside it’s home.
Ribbon eels have a thin body with high dorsal fins and can be recognized by the expanded nostrils. Macro shots will reveal clear razor sharp teeth. 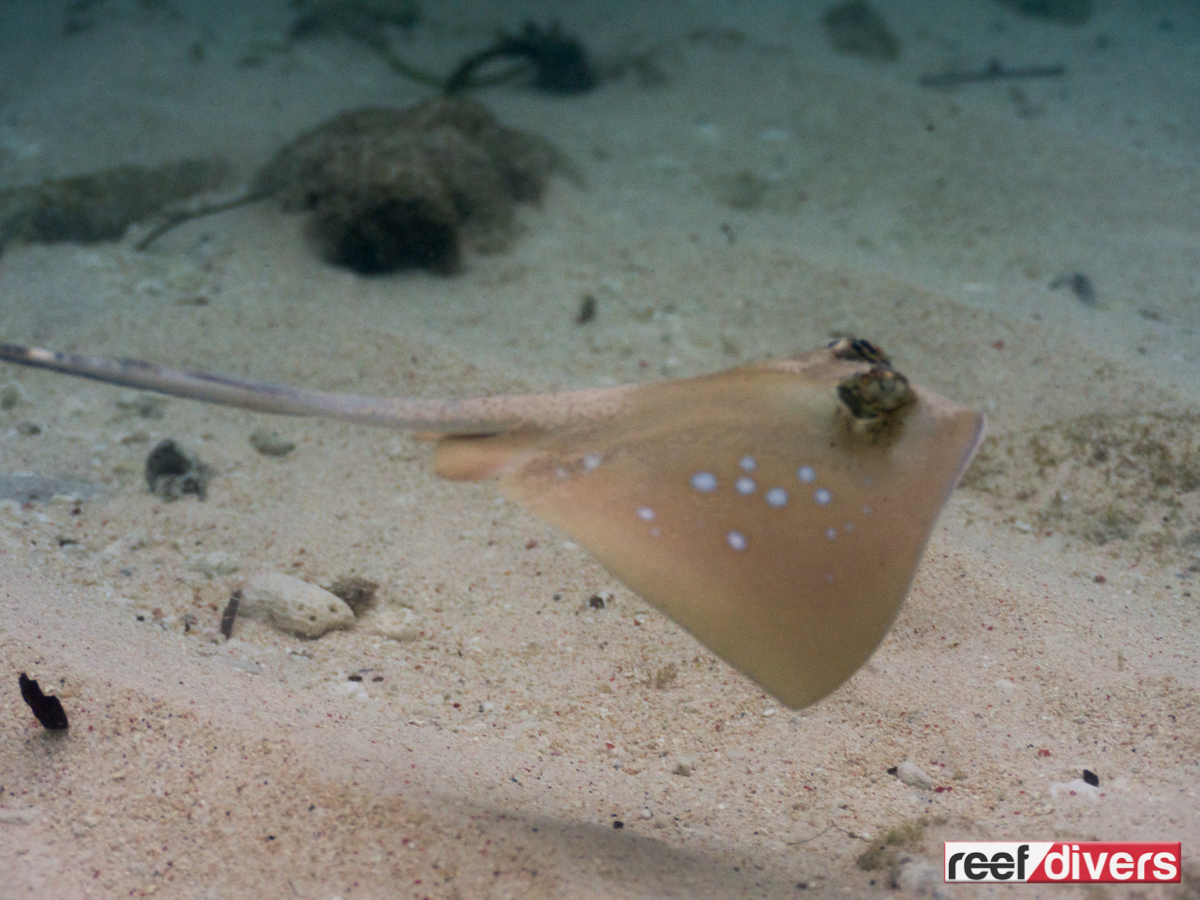 The spotted stingray has a flat body up to 50cm, (20in) in diameter. Their color is usually tan or brown with a white belly, and iridescent blue spots covering the back. The rays’ bright coloration is a warning to predators that it carries a powerful punch.
The spotted stingray has a long tail which is about twice as long as the body, and at the base of its tail, the stingray has two venomous spines. The barbs or spines are two different sizes, one being very large and the other a medium-sized barb 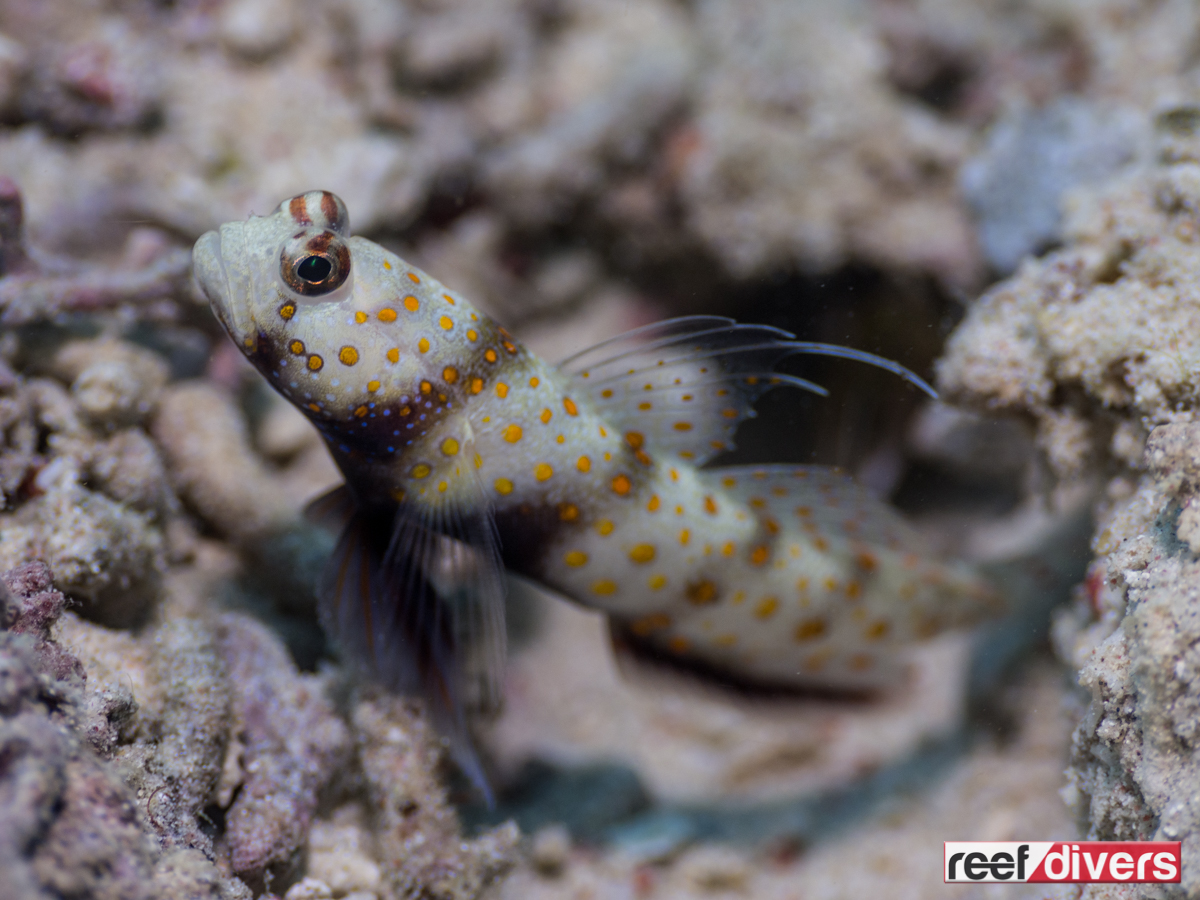 The watchman goby vigilantly guards a sandy cave and will quickly retreat if you get too close. If you keep your distance you will notice a small snapping pistol shrimp scurrying from the hole and tossing small clawfuls of sand.
The goby and shrimp have a symbiotic relationship. The shrimp is a excellent burrower but has very poor eyesight. The watchman goby stands guards at the entrance to their burrow quickly raising the alarm and darting into the cave together with the shrimp. 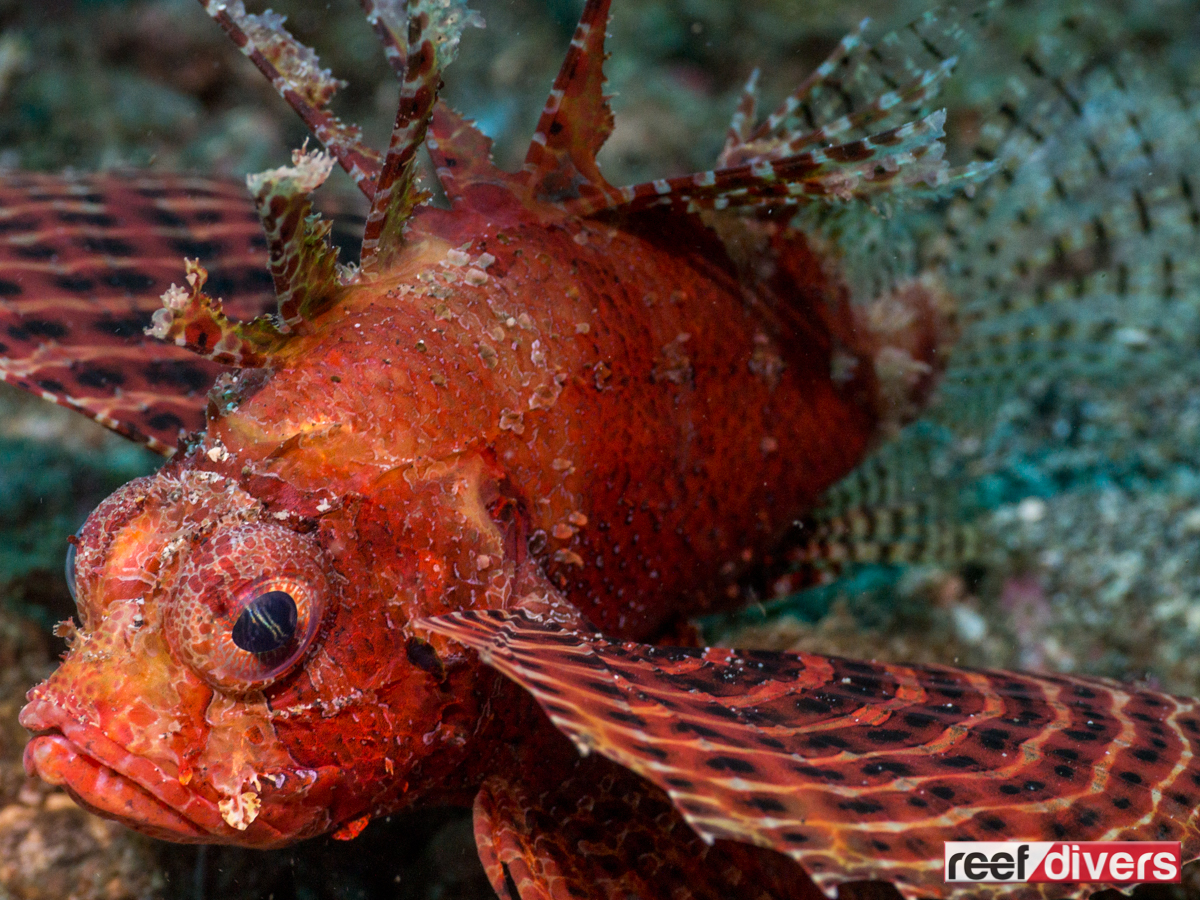 The zebra lionfish is a distinct looking fish with a brilliant ruby red color and vertical stripes in orange, white and black on the body, and large. This lionfish also has banded fan-like pectoral fins that flare out on either side as this fish swims slowly over the sandbed.
The front dorsal fin is made up of thirteen tall, quill-like spines and the second dorsal fin has ten to eleven soft rays. This fish grows to a maximum length of about 25 cm (10 in).

'Coral Spotting' Is The New Trend In Tropical Reef Diving