Picture this, an uninhabited island made entirely of sand. Only a few sparse bushes growing in the center, surrounded by azure, turquoise, well pretty much every shade of blue you can imagine. Welcome to Sand Island, only a short boat ride away from the Tavanipupu Island Resort, Solomon Islands.

Sand Island will leave you feeling as if you’ve just landed on the edge of the known universe. Set up a beach umbrella and relax for the afternoon. Enjoy a picnic lunch between incredible coral snorkeling. Sand Island is an unforgettable experience for the whole family.

Surrounding Sand island, are shallow coral bommies and white sandy banks. Right off the beach, you will find large patches of branching Acropora in water so shallow these corals would easily break the surface at low tide. Instead of growing up these colonies focus their energy on growing outward to cover more ground.
A little further and deeper out between 2-5 meters (6-15 feet) is where the action happens. Strong Isopora corals buffer the sandy island from wave action and provide a beautiful maze of towering corals for snorkelers to weave in and out. 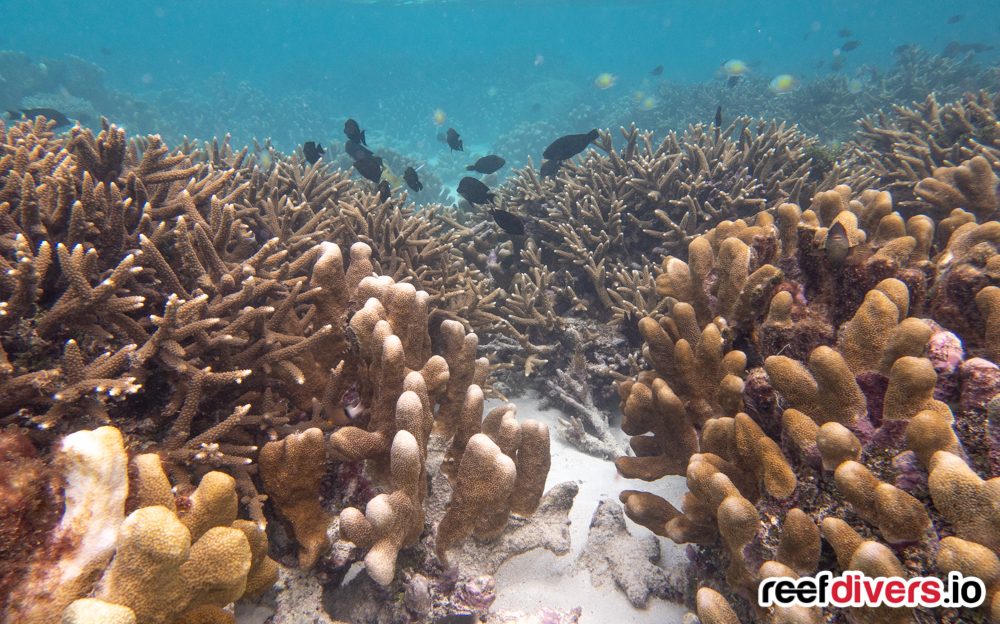 You may also notice on one side of the island there are several coral skeletons which are nearly completely buried in the sand. After big storms and a prolonged period of high waves and wind, the islands sand shift from one side to the other. These corals were killed by sedimentation leaving only the skeletons behind.
However, we saw some very positive signs of recovery with juvenile corals starting to colonizing the reef rocks. These baby pioneers were anywhere from a few centimeters across to several years growth indicating this reef is still healthy, despite one side having patches of coral skeletons near the shore.

It’s easy to spend several hours snorkeling the shallow Solomon Island waters, spotting the different coral colors. Since the older mature colonies have died off you can find plenty of new corals dotting what remains.
Each coral reef we visit tells a story, and Sand Islands story is one of resilience. Shifting sands above and below water is a natural ebb and flow of reef life. Once the dust settles new life emerges starting the cycle again.

To get to Sand Island, take a boat from the Tavanipupu Island Resort 15 minutes to sand Island. Tavanipupu is located in Marau Sound, the eastern end of Guadalcanal Island, in Guadalcanal Province Solomon Islands. Take a flight from the capital city Honiara to Marau Sound on Solomon Airlines or private Air Taxi.

Innoqua is a start up company to accelerate aquatic organism research