Shipwrecks and coral reefs, Raiders Hotel & Dive on Tulagi Island has something for every diver. The hotel is only a short boat ride, around 1hr from the capital Honiara, offering dive sites for all experience levels.
Raiders is a choice destination for divers for all levels as the boutique hotel and dive center can facilitate entry-level experiences up to advances tech diving. Tulagi Island and surrounding areas have access to deep reefs and historical shipwrecks.
We had the chance to spend two nights at Raiders and checked out a handful of dive sites. Our only regret was leaving too soon, as we had not even begun to scratch the surface of the diversity of dive sites.
Tulagi is famous for its WW2 shipwrecks, including sunken airplanes. But the owners are equally interested in coral dives telling me their sites are about 50% wreck and 50% reef. And let’s get real, the reason we went to the Solomon was for the corals. Reef Divers readers, will know over here we’re obsessed with corals, but believe it or not every now and then you will catch us descending onto a sunken wreck! 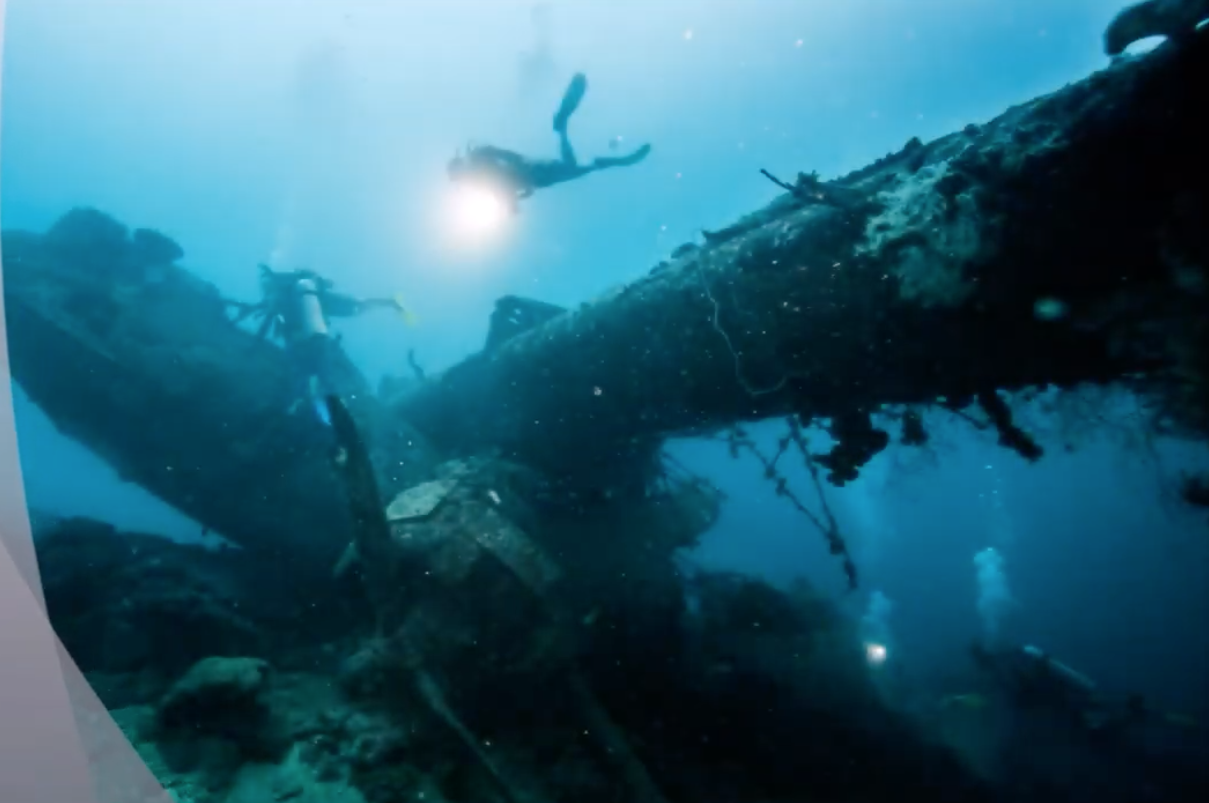 The Kawanashi was a special type of airplane called a flying boat and was used by the Imperial Japanese Navy Air Service during World War II for maritime patrol duties.
The Kawanishi Seaplane was a large, four-engine aircraft designed for long-range and extended endurance on patrols or bombing missions typically flown alone over the ocean. Now it sits between 24-30m deep off the coast of Tulagi Island.
We spend a few minutes admiring different corals which were encrusting onto the wings of the Kawanashi Seaplane before ascending the wing onto the reef.
Turbinaria VIDEO 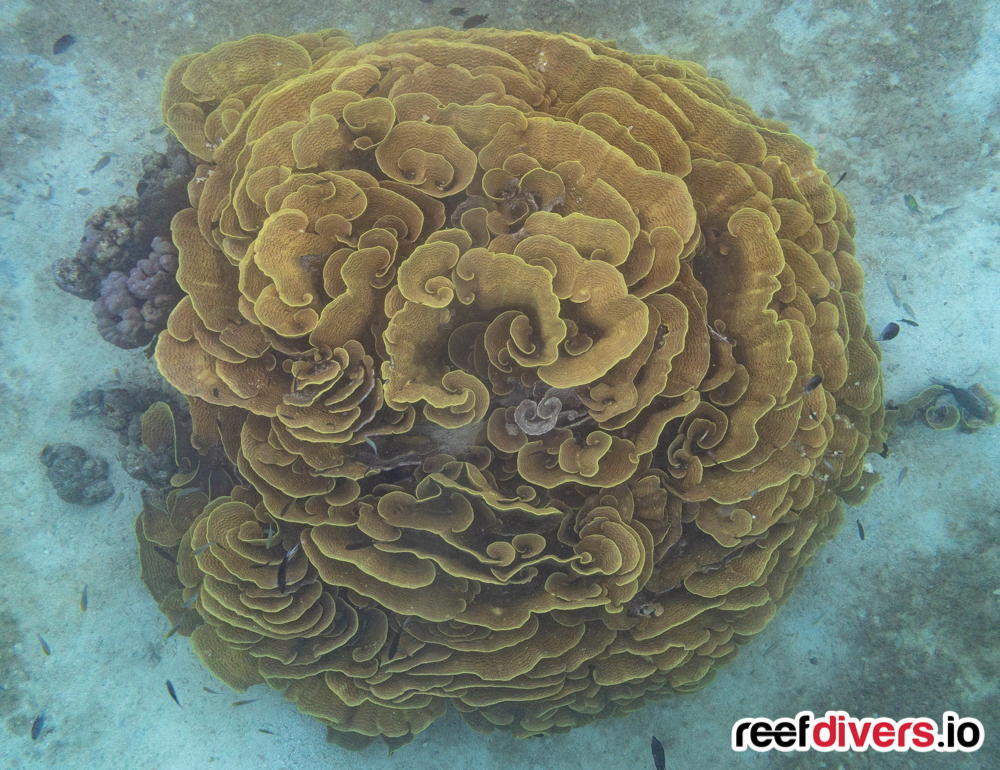 As you swim up past the wing there is a meandering coral reef along the shoreline with some standout colonies of yellow Turbinaria reniformis. This plating coral forms vase-shaped colonies which overlap as tiers.
In the deeper parts of the reef around 10m (30 feet), the colonies are spread out wide. As you reach the sandy shallows they start creating bulbous bommies around the size of a small car!

Another popular dive site is the Mbike island Shipwreck. We visited this site with Raiders dive who have special permission to land on Mbike island and visit the wreck site.
Mbike island is surrounded by a steep sandy slope and the wreck which is located between 2030m deep is a quick swim from shore. Tanya G Burnett who joined us on this trip snapped this shot of a diver above the bow of the wreck.
We were impressed with the many corals encrusting on the wreck including the hands-down prettiest Cynarina we saw in the Solomons. This coral alone might inspire a top ten corals of the Solomons post. This pretty polyp was located on the port side bow as you approach the wreck about midway toward the top deck.

We also found some beautiful Mycedium colonies and, several more Cynarina and some small examples of Sinualria dura pictured below. This soft coral has a clear body and beneath the tissue, you can clearly see the hard calcium carbonate sclerites which give the coral structure.
The Sinularia is the coral pictured below which has a bow-tie shape. These corals typically grow in leaf or petal shapes up to 10cm across and it appears this one colony was reproducing by splitting in half

Now, this dive site really got me excited. Bob, one of the owners of Raiders, starts to tell us about the site. He explains there are two verticle tunnels starting around 10m deep ending around 38m. With a little hesitation trying to imagine the size of these tunnels we hop on the boat ready for the dive. 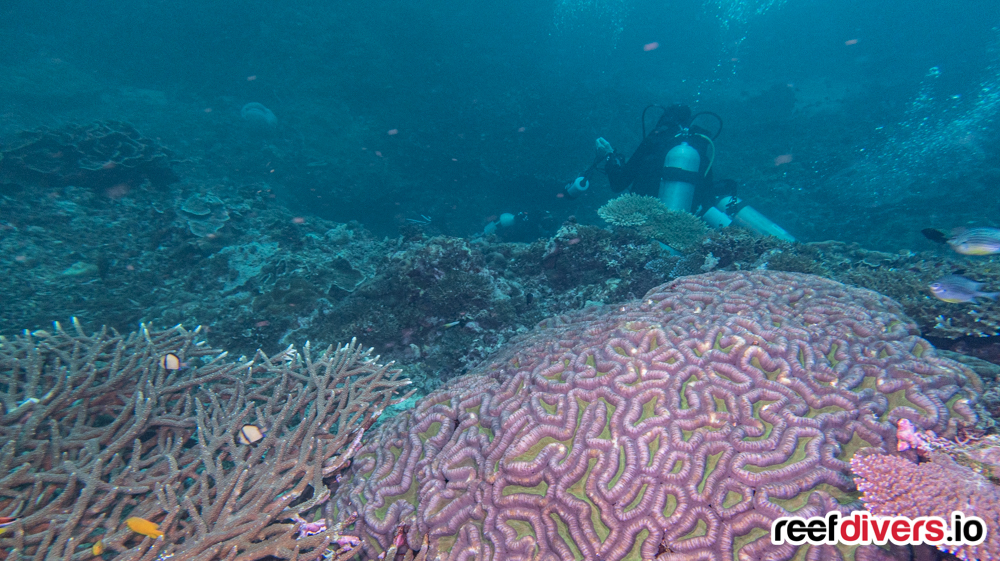 At the top entrance of the tunnel, of course, we were distracted by a huge grey and green Symphyllia coral, to the point we totally for photograph the tunnels!! You can see in the background of this image as the divers descend.
And thank our lucky stars that Tanya was on it for this dive and she snapped some shots from the bottom of the tunnel looking up.

Inside the tunnel which is about 4m wide, the walls are covered in branching Gorgonian corals. As you got deeper in the tunnel there were several more Octocoral clusters in a small cave when the tunnel ended on a steep reef wall.
At the top of the wall is a reef plateau with fields of corals. Depending on tides this site can have strong currents so make sure to follow your guide.
See also  Solomon Island Acropora millepora Are Taking Over Unique Corals

You know we always save the best for last. Simons Nature Reserve deserves it’s very own posts! We went snorkeling at this local natur reserve after visiting the Mbike wreck. Simon is a resident of the area who has been gardening his home reef since 2004.
This place is a true coral haven with an example of nearly every coral species you can find in the Sandfly Passage, about 45 minutes boat ride from the Raiders hotel. Simon charges a small fee to snorkeling his reef and protects the reef from fishing.
He is an example for his community and a shining example of how marine conservation on a local scale can have a positive image on the environment as well as provide a sustainable livelihood. Check back for the full article!