Tridacna squamosina was first described jus over ten years ago and we finally have the first solid evidence for this species in the aquarium hobby. Originally described as Tridacna costata, T. squamosina or the squamosina clam has a surprisingly distinct appearance which is hard to confuse with any others.

Since wild collection of anything but fish is completely banned in the Red Sea, we never ever imagined that we would ever see clams from this especially rich marine life hotspot of the world. But to our surprise, earlier this year we learned that Dejong Marinelife was already receiving cultured Red Sea Tridacna clams from a dedicated clam farm in the region.

We’ve seen far too few examples of the farmed Red Sea clams but the only one that really counts is a photograph of Tridacna squamosina sent to us by René van der Bel of the Netherlands. As far as we can tell, this exquisite portrait of this rare bivalve is the first such example of the poorly known squamosina clam and we’re struck by how this clam looks. 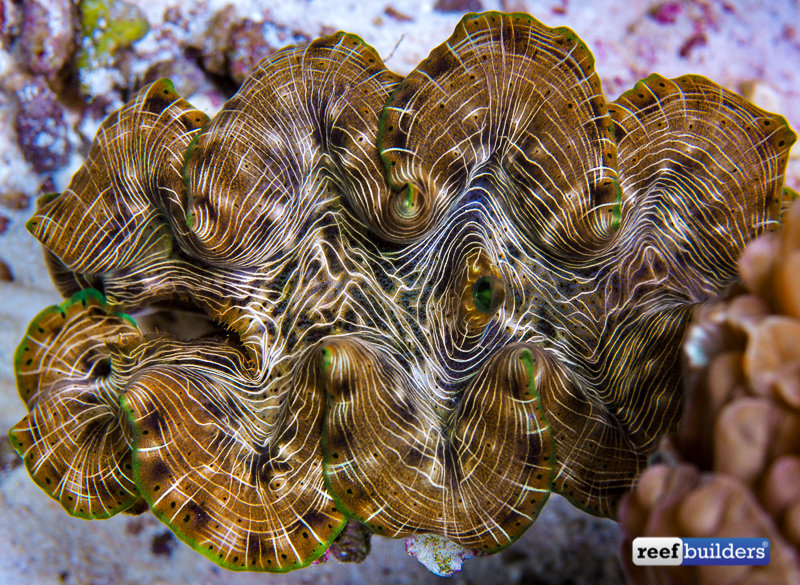 Besides the well-developed folds of the shell, the mantle of T. squamosina is very conservative with the original description highlighting the network of fine lines on the mantle, the green rim or lip, and a warty surface. The uneven surface might not be visible from the top down view of René’s picture but those light colored lines and green rim are impossible to mistake for any other species.

European and especially Dutch reefers should consider themselves lucky that their LFS can easily order up the Red Sea clams from Dejong Marinelife as we do believe some American dealers are working to bring these in stateside. Big thanks to René van der Bel for sharing this gorgeous clam and the perfect photo to help us imagine one in our own aquariums.