The Seachem Division Skimmer is a brand new hardware product category for a company that has built its brand and reputation on making aquarium chemical additives. The announcement of the new Division Protein Skimmer from Seachem comes at the same time that we learn about the new Seachem Impulse water pumps and Aquavitro Sentia Dose dosing pumps.

While one of those devices comes from a familiar source but with a new color, it is beyond refreshing to see Seachem do something truly different with their Division Skimmer. It’s clear to see that this foam fractionator has some unexpected features, bells & whistles that we wouldn’t expect from a mass market marine filtration product, and we’re chomping at the bit to dissect some of these with you. 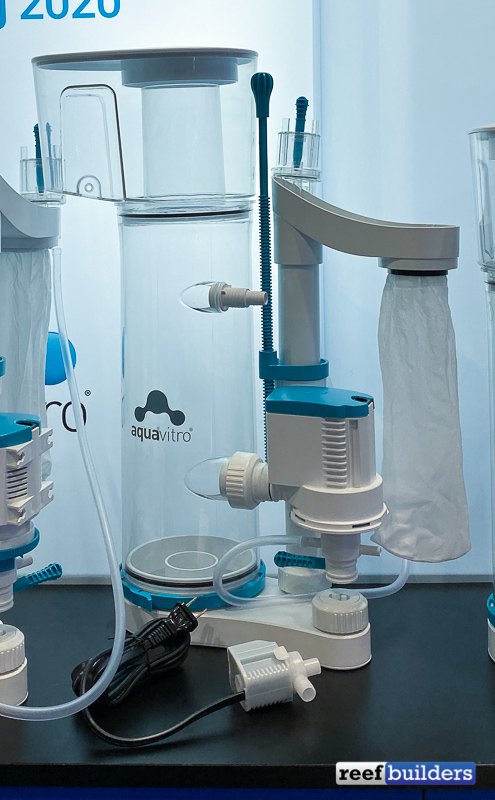 Let’s start with the model numbers of the Seachem Division Skimmers which still has us scratching our heads – the Division Skimmer includes three models from the 125 GPD, 250 GPD and 500 GPD. GPD is a unit of measure meaning gallons per day and is usually reserved for reverse osmosis units, while protein skimmers generally carry a rating of liters per hour in terms of how much air they draw through the needle wheel.

Even a small protein skimmer usually carries a rating of 500 to 800 liters of air per hour – there is a case to be made that modern protein skimmers perhaps draw in too much air and not enough water but 500 GPD equates to around 78 liters per hour, so we’re not sure where Seachem is going with that GPD acronym. 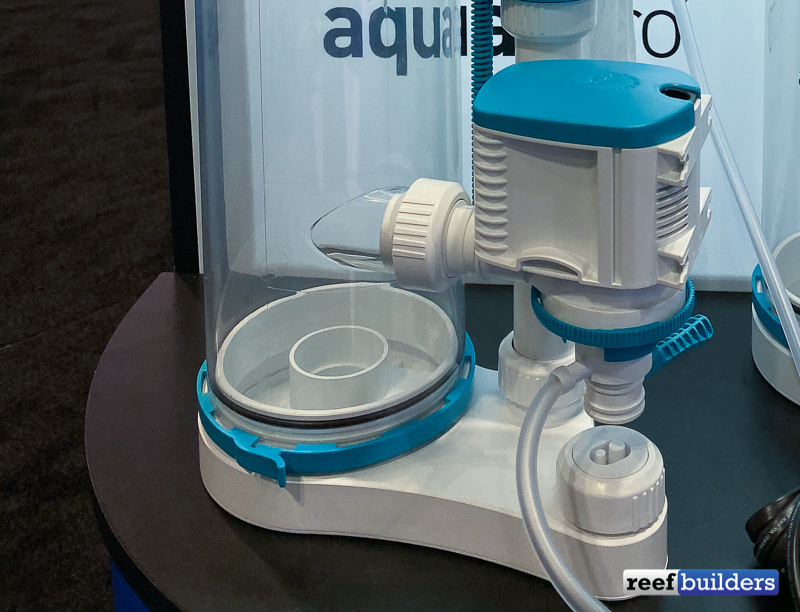 What is a little more clear is that Seachem is using Sicce Syncra SK and PSK needle wheel pumps for the Division Skimmer; we know that the Division Skimmer 125 GPD and 250 GPD are using the Sicce Syncra SK 200 & SK 600 rated at 200 and 600 liters per hour respectively. The larger Division Skimmer 500 GPD steps up to a Syncra PSK 1000 recognizable by the much larger volute at its base, and with the ability to draw up to 1,000 liters of air per hour, its incarnations have been a workhorse needle wheel pump on skimmers over the last ten years.

If there’s one overarching design feature which is low-key blowing our minds right now it’s that the Seachem Division Skimmer are not sporting any kind of taper where the body meets the riser neck inside the cup. Never mind the use of any kind of conical or inverted wine-glass body shape that typifies virtually all protein skimmer models released in the last five years – rare exceptions would be the Tunze DOC skimmer and Deltec’s latest iSeries. 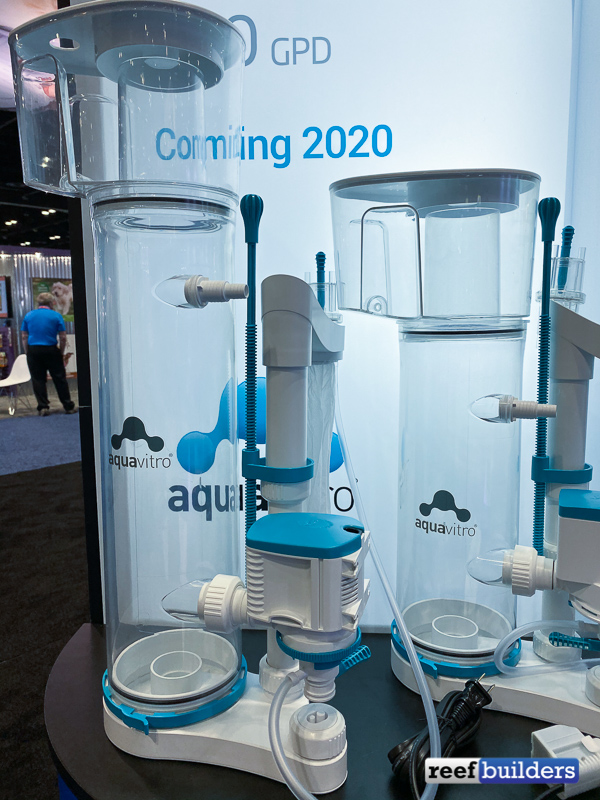 One thing that is jiving with that tall smooth cylindrical body is the insertion of the pump outlet low down and off center to the body, a configuration that promotes a strong spinning motion in protein skimmer bodies. With its placement so low and tangentially to the center it’s apparent that Seachem is aiming to promote long contact time of the air water mixture. 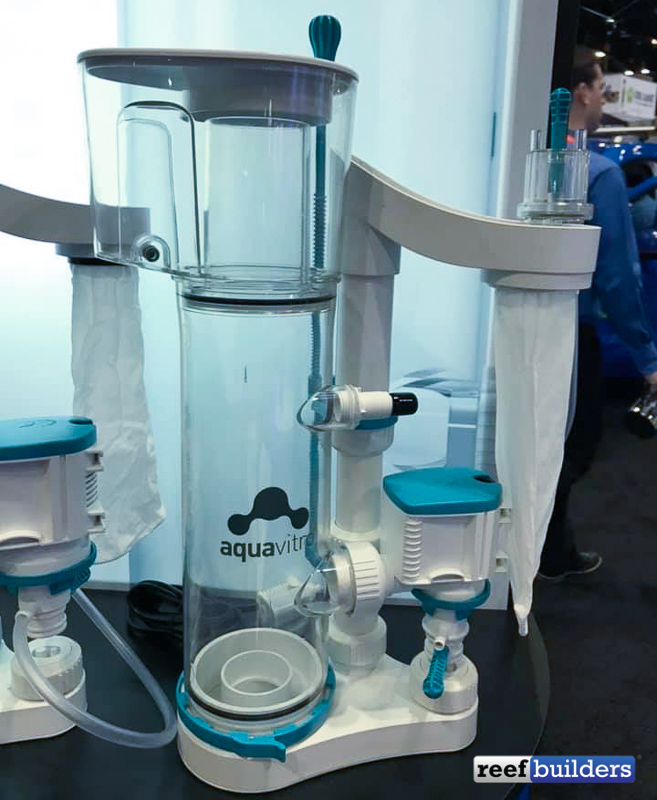 A second optional water inlet is placed higher up the protein skimmer body, also at a tangent to the center, further promoting and emphasizing contact time inside the Seachem Division Skimmer. Small white Sicce feed pumps are included in the presentation of these further driving home the point that Seachem wants to get back to some old school protein skimmer fundamentals with the recirculating option.

The current state of the reefing hobby has placed a lot of emphasis on pure total air draw volume so it’s nice to see Seachem really charting its own path in pushing the needle towards longer contact time. There’s a whole suite of other interesting features to the Seachem Division Skimmer like a clamp system to attach the body to the base, a screw-adjusted riser tube for the outflow, and a gently curved downspout to reduce noise of water cascading down into the final stage filter bag. 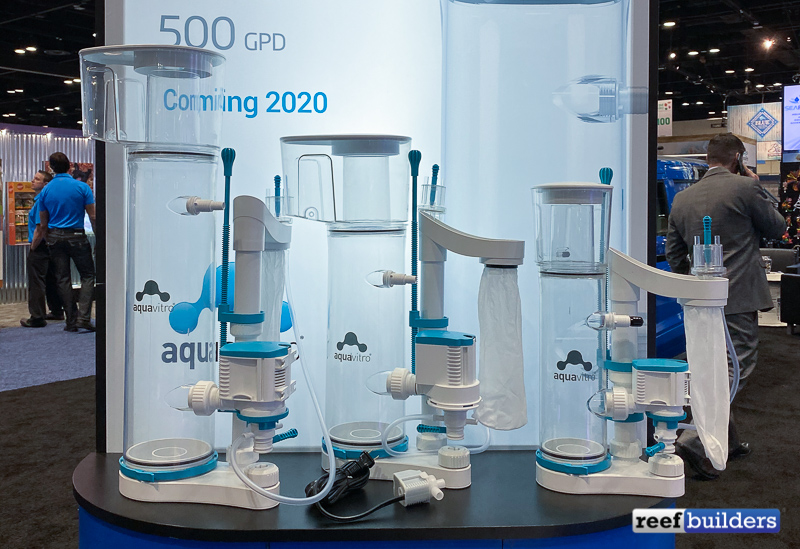 There’s still a lot to unpack about Seachem’s first ever protein skimmers, not the least of which is when they will be released, how much they will cost, and what other tricks the Division Skimmer might be hiding. More importantly, we can’t wait to see the Seachem Division Skimmers in action because the time is long past due for some innovation in the protein skimmer space, even if that means revisiting and perfecting some old ideas.

It's Always Fun Adding New Fish to an Aquarium [Video]