Plerogyra diabolotus, the Devil’s Bubble Coral in our Reef Tank!

Bubble corals are a common group of reef and aquarium animals that everyone knows well, it’s one of the first coral names many people learn. But despite their visibility, the Plerogyra and Physogyra have never had a ‘hype moment’ the same way that zoanthids, Acros, chalice corals, shrooms and most recently, Euphyllias and torch corals have.

This is a shame because there’s incredible diversity in the bubble corals, which by some accounts actually includes the Blastomussa, yes really, as well as Branching bubble coral and even more to be appreciated from Wild Bubble Coral. In a recent article veteran Bali coral farmer Vincent Chalias brought to light a 2003 description of the often overlooked OctoBubble which also made us aware of two other species which had never graced our presence, until now.

Plerogyra multilobata is the name that was given to the common Octobubble coral, the one with one or several lobes to each ‘bubble’ shaped vesicle. Another species described in the same paper is Plerogyra diabolotus, or what we’re calling the Devil’s bubble coral has multiple nipples and lobes and a more convoluted, indeterminate shape to the vesicles.

While doing some rearranging in our reef tanks we pulled out what we thought was an octobubble that was in the very back of the Euphyllia garden and finally got a closer look at it. Low and behold, one glance at what this coral has become and it’s clear that it’s far outside the range of appearance of typical Octobubble. 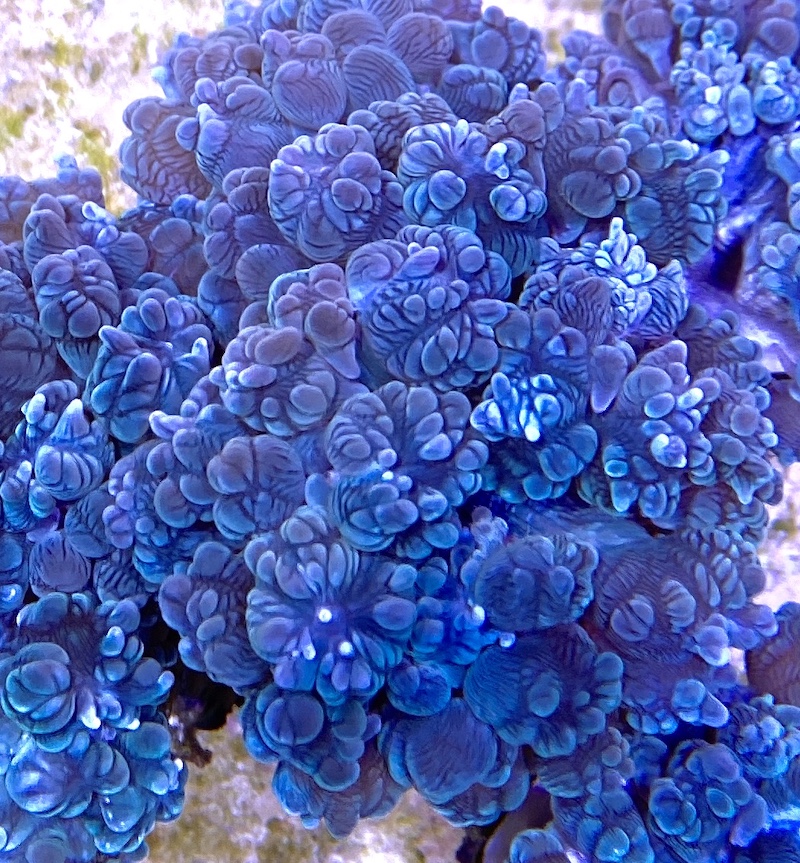 The super lobed, tentacle-y, and wrinkled polyps certainly fit the description of the tissue and polyps of P. diabolotus and the blueish grey color is certainly deserving of being called Devil’s Bubble coral. Whether or not our colony is indeed this newly recognized bubble coral species described in 2003 it has already expanded our  expectations of what bubble corals can look like.

In either case we’ll be watching our colony of Devils’ bubble coral very closely, maybe lopping off a lobe or two to share with reefing friends. But more importantly we’ll be keeping a keen eye out for the third species from that paper, Plerogyra cauliformis with textured vesicles that look like stained glass windows – there’s got to be so much hidden diversity hiding in that species and we can’t wait to someday see it for ourselves.