There are a lot of tools that can make the job of the aquarist much easier around the reef tank. We’re always on the lookout for any instrument that makes working with, handling, or simply reaching corals that much easier and the Maxspect Coral Tweezers fit this description to a tee.

It was less than two months ago that we learned about this new, highly engineered carbon fiber aquarium tool from Maxspect and have been reaching for them on a regular basis for help with basic reef aquarium tasks. If you’re new in the aquarium hobby, or have been reefing for a while but still haven’t had to add tweezers to your reef aquarium toolbox, you might be wondering why a reefer would have so many different pairs of them. 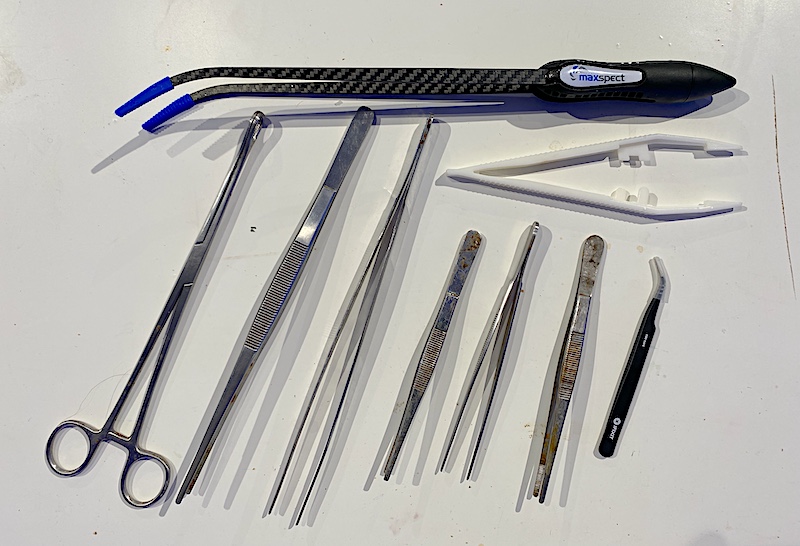 Simply put, I’ve got tweezers for small things, pairs for large things, tweezers for reaching deep into tanks, tweezers for feeding, plastic ones for working with chemicals, some fun ones with sublimated fluorescent tie dye patterns, and an assortment in between that all get pretty regular use. The one thing that they all have in common is that they are almost all metal and despite all being labeled as ‘Stainless Steel’ (yes I know there are many grades of SS), all but my very expensive and treasured ADA tweezers exhibit some degree of corrosion. 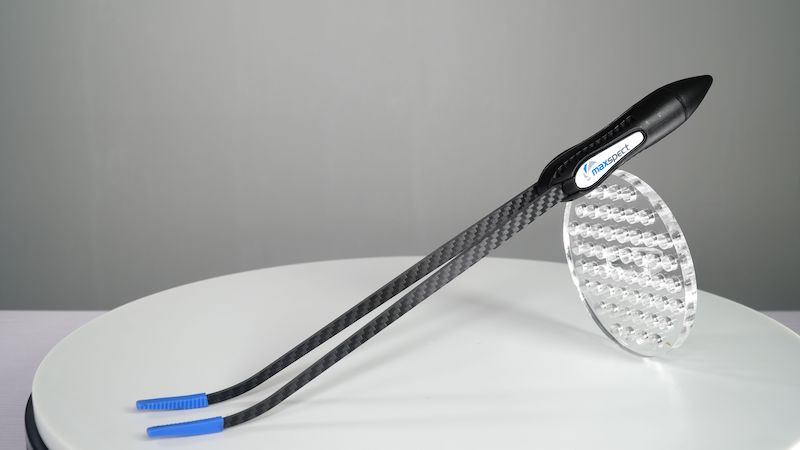 Interestingly enough, our first pair arrived just days before we realized how much we needed a tool like this, despite having nearly a dozen other tools that can variably be described as ‘tweezers’. At first the muscle memory in my hands rejected the pressure required to press the Maxspect Coral Tweezers to a close, since the metal ones are so easy, but I quickly realized that this was a benefit when handling delicate small coral frags and tips.

The corrosion-proof and near perfect buoyancy of the Maxspect Coral Tweezers are surely big selling points, the precise grip you can achieve with these coupled with the delicate silicone tips make them my favorite tweezers ever for handling corals. While fragging the new neon green elkhorn coral the delicate branches often snapped off teeny tiny tips, so small that handling them with the sausage fingers on my adult hands would damage them so much, that I might not have even considered gluing them down.

After close to two years of development, user trials and several revisions later, the Maxspect Coral Tweezers are finally ready for the market. Made with 3mm thick carbon fiber, see how elegantly it hovers in the middle of the water column due to its natural buoyancy.#neutralbuoyancy#carbonfiber#professionalcoraltools

Furthermore, while placing coral frags in deeper parts of the aquarium the buoyant handle of the Maxspect Coral Tweezers actually helped us in achieving the desired placement, without the risk of them plunging into the tank, either out of reach or straight into a coral resting on the bottom. The need for a ‘gentle’ touch becomes really apparent when handling thin branched stony corals such as Anacropora and some deepwater Bali Acros. 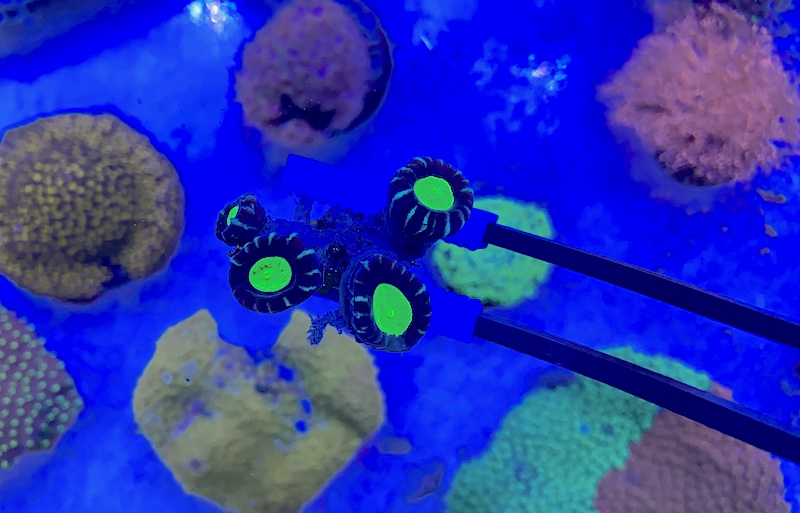 We never thought that anyone would actually take the time to develop a pair of coral-grabbing tools specifically for handling aquarium corals, not just their bases or frag plugs. It’s worth reiterating that we have around a dozen assorted tongs and tweezers but the Maxspect Coral Tweezers are definitely the best we’ve ever used when you have to contact with live coral tissue. The nearly indestructible carbon fiber Maxspect Coral Tweezers are expected to cost shy of $20 – so a lot less than even many cheap stainless steel options – and will be available worldwide beginning in about a month. [Maxspect]

What Eats the Crown-of-Thorns Starfish? The Answer is Found in Fish Poop.

Coral Loss Can Lead To Bigger Fish Size, But The Results Are Short-Lived