After decades of being very challenging to keep, all of a sudden over the last few years many more reef aquarists have been able to enjoy living and growing colonies of Goniopora, the related Bernardpora, and unrelated but similar Alveopora. This widespread success has resulted in ‘flowerpot’ corals being enjoyed by many more people and numerous varieties being discovered and appreciated from Denver to Brisbane.

One company which we would consider a trailblazer in the aquaculture of flowerpot corals is Gallery Aquatica  which was the first reef shop to recognize spotted, sparkly colored Goniopora which they first named ‘Glitter Gonies’. With a steady stream of fresh and new Goniopora colonies from all over Australia, Gallery Aquatica is renowned all over Australia for their huge selection of flowerpot corals and today we are excited to share with you two more distinctive varieties they have in their collection. 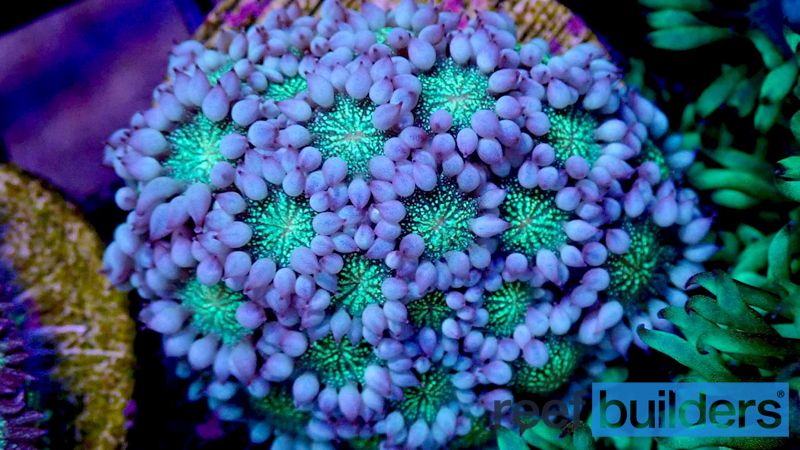 The first of these exciting flowerpots we want to share with you is the sensational ‘Glitter Face’ Goni which is a striking strain of Goniopora that has large bulbous white tentacles surrounding a glittery and striped oral disc and mouth. You might need to look really close to see the tell-tale spotted coloration of some regular Glitter Gonies but the Glitter Face has an appearance that will catch your eye from across the room.

The large striking tentacles may resemble and Alveopora at first glance but the more than 12 tentacles confirms that this is indeed a true Alveopora with closer ties to Porites than Montipora. The Glitter Face is a species that has noticeably shorter polyps that will get longer as the colony matures, but they will remain quite a bit shorter than other flowerpots with very long, flowing polyp stalks.

The other exciting new strain of flowerpot coral that Gallery Aquatica has been working on is being called the Galaxy Goni and it is essentially a form of Glitter Goni with fewer and much larger spots, mostly on the mouth and oral disc. There is probably a gradient of speckling from the fine spotted Glitter Gonies to the larger spotted Galaxy Gonies but there’s no question that these beautiful corals deserve special recognition among the flowerpot coral collectors.

Last but not least, the Glitter Goni trait has been observed in a wide range of color forms from red to green so it was only a matter of time until someone came across Rainbow Glitter Goni as we see pictured below. This sensational piece of Rainbow Glitter Goni has an even distribution of small, iridescent spots throughout the colony that help to accent the yellow base of the tentacles that gradually turns pink towards the end of the polyps with a subtle green mouth and blue tentacles. 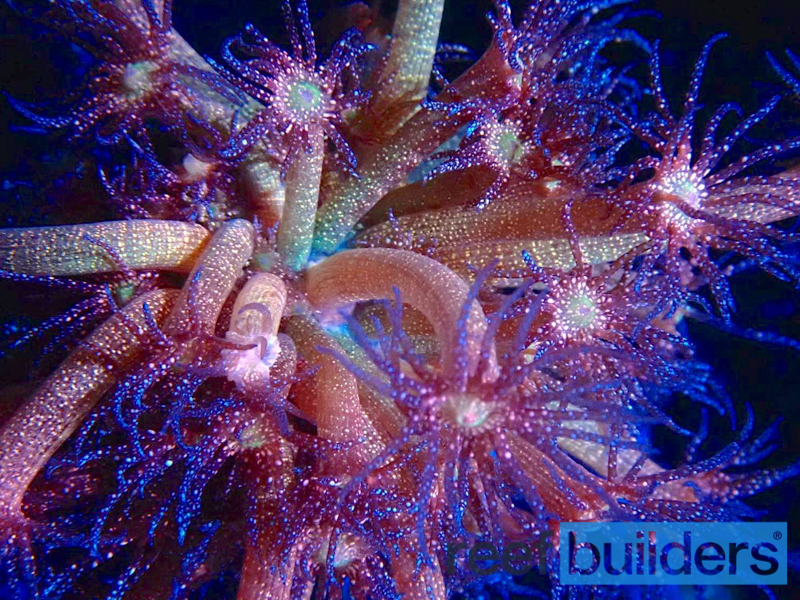 Flowerpots and Gonies are an incredibly diverse group of corals that have presented a challenge to reef aquarist for most of the history of the reef aquarium hobby. Through better understanding of water chemistry and more balanced nutrition reefers are finally able to give Goniopora the attention they deserve and with that our appreciation for flowerpot corals has only grown and the Glitter, Glitter Face, and Galaxy Goni strains are probably the first of many new exciting strains and color morphs we are likely to come across in the future and no doubt Gallery Aquatica will continue to be part of the vanguard of those discoveries.