The Solartronic is the new name of a light fixture from Focustronic that we’ve known about for three years when it was originally revealed as the Focus 2 at InterZoo 2018. Focustronic first got its start in the aquarium hobby with the Focus 1 LED light which was the first of its kind to have built in motors to swivel a cluster of LEDs from side to side.

In recent years Focustronic has become better known for its Alkatronic automatic alkalinity controller, the five channel Dosetronic dosing pump system, and most recently their Mastertronic which measures many more parameters to perfectly compliment the Alkatronic. Lately we’ve been wondering when Focustronic would see fit to finally reveal their Focus 2 LED, now renamed the Solartronic, which is potentially one of the most ‘dynamic’ LED light fixtures the reef aquarium hobby has ever seen. 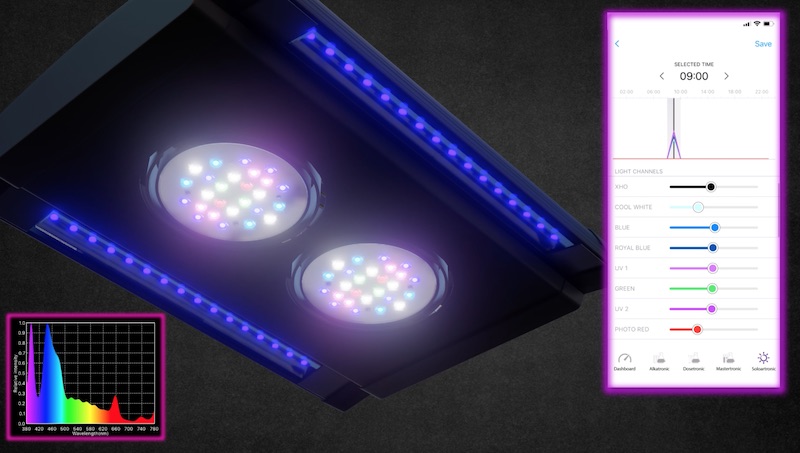 Just to bring you up to speed on our coverage of the Focus 2 from Germany three years ago, the renamed Solartronic is a higher performance LED light fixture with a massive 280 watts of power coming from two closely spaced LED clusters which are complimented by a pair of controllable striplights to further fill the aquarium with light. The striplights themselves are nothing new since these will be built-in ReefBrite XHO first made available to reef builders over ten years ago, but Focustronic’s choice to incorporate these well trodden striplights is a curious choice.

The LED clusters of the Solartronic for their part will have seven channels of color control including green, photo red, cool white, blue, royal blue, and not one but two channels of UV with one slider controlling the 410nm & 420nm diodes and an interesting lower wavelength UV channel with both 365nm and 395nm which should be nearly invisible to the human eye, but may bring out some interesting fluorescent colors. Of course we’ve already seen reef aquarium lights with this sort of color spread, controllability, and even built-in accessory striplights but the secret sauce of the Solartronic is its dual axis gimbal for each LED cluster.

In the videos above and below you can see how each of the Solartronic’s LED clusters can swivel up to at least 24 degrees in any direction of the X and Y axis but it’s important to mention that while in regular use the clusters won’t visibly move like in the video, instead adjusting by tiny increments over long periods of time as required to cover the entire aquarium or your specific program. If you thought managing and programming eight color channels was a task, now try figuring how much and how often you want the LED clusters to move around your aquarium and it might seem daunting at first, but hopefully Focustronic has spent the last few years sharpening the software side of things.

The vast number of lighting opportunities in a movable light like the Solartronic is a reef aquarium gear junky’s wet dream and as you can see in the demonstration below, a single light fixture can be used not just to fill in every corner of the aquarium, but it can directly illuminate every corner of this three foot reef tank. It’s kind of cool to see how the LED clusters swivel around within the fixture of the video above, but seeing how that light moves around the aquarium in a reef tank with water is a completely different kind of performance proposition and the antidote to static light fixtures with minimal flexibility of lighting and mounting options.

In a way we are somewhat glad that Focustronic held back the launch of the Solartronic for a few years because not only have they grown their brand and refined their manufacturing and engineering, but there’s probably never been a better time for the global community of reef builders to understand what a light with movable LED clusters means for our reef tanks. The $1380 sticker price of the Solartronic might be a premium compared to other fixtures but those reefers who really want to play and tweak their lighting spectrum and which way the LEDs are pointing will give this light some serious consideration.

We’ll repeat that we really hope that Focustronic has really nailed the smartphone control side of things so we can enjoy a highly streamlined setup and programming experience which will all communicate over your local router wifi network but can also be accessed remotely. Thankfully we shouldn’t have to wait too long to discover how the Solartronic lives up to its expectations  because the planned release date is coming right up next month, July 2021; we know we previously reported that the ‘Focus 2’ would come out at the end of 2018 but we’re confident that Focustronic is for real this time. 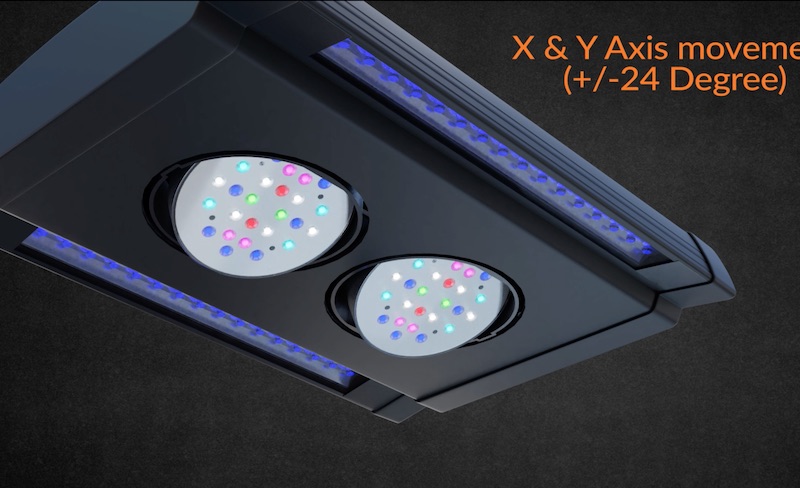