For as well studied and heavily traveled as the Red Sea has been throughout most of history, it still surprises us how much of its marine life remains rare, elusive, and poorly documented. If it wasn’t for the recent diligence and keen eye of Andrey Ryanskiy, author of our favorite guide to Echinoderms, we wouldn’t have the privilege of enjoying such special reef animals such as the Lubbock’s dottyback, orange head anthias, the tantalizing Echinopora, and today Andrey shines a light on another endemic Red Sea reef fish.

Fairy wrasses are some of the most ‘high profile’ ornamental fish of coral reefs with males developing incredible colors and putting on elaborate spawning displays. While they are well known across much of their natural ranges, for some reason the Indian Ocean C. sanguineus from Mauritius and C. blatteus from the Red Sea are so rarely documented that every photograph of them borders on being precious.

Also known as the purpled-boned fairy wrasse, this set of images of C. blatteus by Mr. Ryanskiy are the first we’ve seen in over ten years as we first featured the elusive species way back in 2012! This photo spread of the purple boned fairy wrasse are a fresh and modern illustration of what the species looks like with all the details of both sexes clearly represented in each image.

The namesake purple zig zag is clear to see on the light reddish-pink body with a white jaw and belly, thin stripes across the top of the head and body with a partially yellow colored lanceolate tail. Part of the reason that we don’t see anyone photographing these fish is that these C. blatteus were encountered at a depth of 65 meters or more than 200 feet deep and we were delighted to learn that while the females are mostly small the purple boned males were on the larger size for a fairy wrasse being approximately 10 to 12cm in length, or between four and five inches. 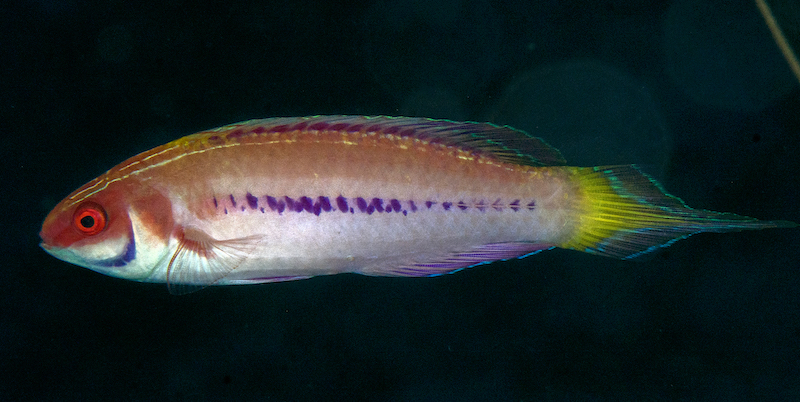