Magnificent Shrimp Gobies from the Flabelligobius genus have long been lusted after as nothing more than a “book fish”, an amazing species you often see in books but never in person.

As with so many rare book fish these days, we are starting to see these species in the trade and the Flabelligobius Magnificent Shrimp Gobies are just starting to make the rounds at some finer LFS and livestock vendors right now. Yesterday Jason Edward of Greenwich Aquaria tweeted the image to the right, of their Flabelligobius and candy pistol shrimp pair and we know that Old Town Aquarium and Amazing Aquariums and Reefs have also received a small handful of of Flabelligobius specimens. It sounds like everyone is also keeping these guys with the red banded or candy pistol shrimp, Alpheus randalli. We’ve searched high and low for any lead on the actual species name of the Magnificent Shrimp Goby but as far as we can tell, all sources simply list this fish as Flabelligobius sp. 1 although Kutier calls it Flabellogobius “Derawan”. Follow the break for more details about the Flabelligobius Magnificent Shrimp Gobies and some first hand accounts from the Fish Monger. Image above from webshots user terjesvaerd.

Flabelligobius sp. 1 occurs from Bali to Japan but aquarium specimens are being collected and exported from Cebu, in the northern Phillipines. The species grows to a recorded maximum size of 2.6″ but recently imported specimens are a little more than half the size. Flabelligobius sp 1 occurs in depths between 15 and 40 meters and it lives commensally with the red banded pistol shrimp, one of the nicest goby hole mates as far as pistol whipping shrimp go. LiveAquaria’s Kevin Kohen tells us that the Magnificent Fan Shrimp Goby likes to make burrows underneath live rock and that it is also a sand sifter, a unique behavior for such a small fish. Kevin has paired up some of his Magnificent Fan Shrimp Gobies and as with other goby species it appears that the male has a slitghtly larger first dorsal fin. If you are into this species you definitely must check out the cover shots of the Magnificent Fan Shrimp Gobies on Goby Frontiers and we want to sincerely thank Kevin, Jim, Jason and Ali for the lowdown on this unique new goby species that we can now remove from the listing of “Book Fish”.

update: we just received this stunning shot from Kkev of the Flabelligobius sp.1 which will post in the DD tonight. 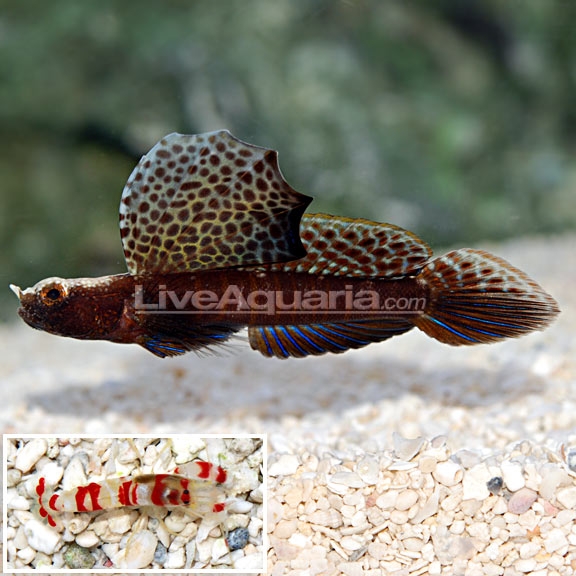 Digital Aquatics and Eshopps get their float on

CRASE this Saturday in Oklahoma City