Ugh, as if we didn’t have enough coral diseases and parasites to worry about, now we can add Skeletal Erosion Band caused by the heterotricch ciliate Halofolliculina corallasia to the list. The tiny little creature is a cingle celled protozoan that was first described living near ailing corals of Indo-Pacific reefs in 1988, but it wouldn’t be formally described as Halofolliculina corallasia until 2001. Since then there has been a steady stream of research done one the weird little bugger with observations both in the Pacific and the Caribbean, and now we can confirm that Halofolliculina has made it to aquarium corals.

Over the past year we’ve occasionally seen the grainy black spots at the base of aquarium corals which is characteristic of Hallofolliculina infestations. Skeletal Eroding Band is what it’s called in the Indo-Pacific where it is the most common disease of stony corals, surprising since most imported corals come from there yet this disease is so far undocumented in aquariums. We didn’t know that’s what it was at the time, not until the ciliated protozoan appeared in one of our frag tanks.

Although the tiny black spots of Halofolliculina have spread throughout this particular small polyp stony coral tank, so far the ciliated protozoan has taken mostly to growing around our corals on limestone tile, super glue and the few bare spots of skeleton here and there. There have been some weaker or non-robust frags which have succumbed to the slow creep of the skeletal erosion band but most of the corals in this tank look bright and colorful with great polyp extension and good growth. We have performed a few antiseptic dips on frags infected with Skeletal Erosion Band and it seemed to have “some positive effect” but it’s too early to tell whether dips alone will be enough to cleanse aquarium corals of Halofolliculina. [Wikipedia] 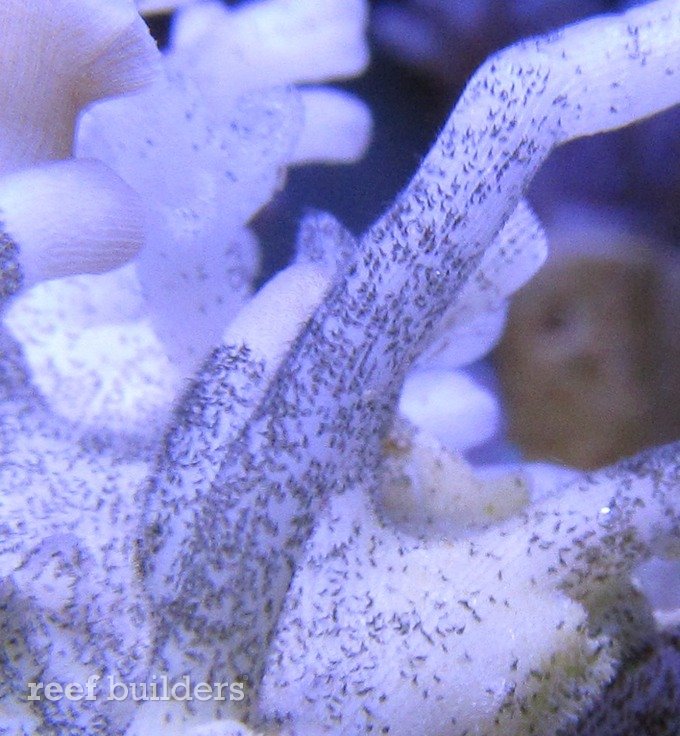 Pomacentrus maafu is Tonga and Fiji's newest species of damselfish

Micro-Reefs bringing pico, temperate systems to an office cubicle near you