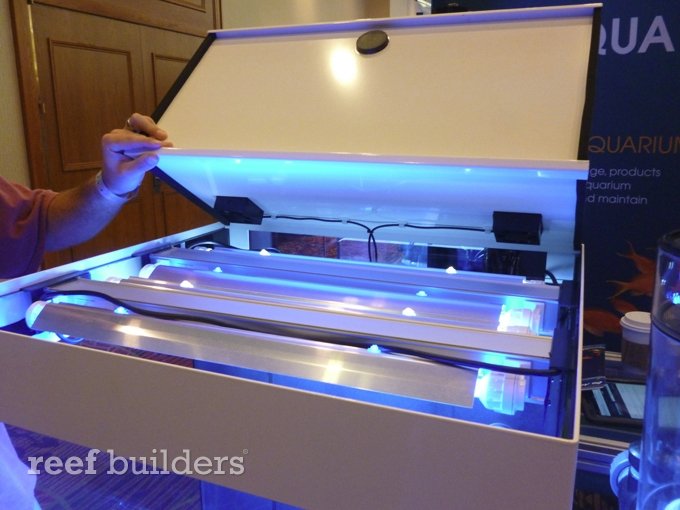 We heard about the Aqua Media Kauderni, the latest version of Aqua Medic’s all-in-one aquariums, in April and were able to swing by the Aqua Medic booth at MACNA to see this aquarium up close. Our first impressions are favorable but we’d feel like the system has some areas that could be improved upon to better compete with other similar kits on the market. Click through for more of our impressions and images of the system.

First off the Kauderni is complete even coming with a stand. The size is nice for those of you looking for a larger system to pack in more corals or keep some larger fish. The 70 gallon system gives you a larger space with a deceptively small footprint probably due to the cube shape of the aquarium and the sleek white stand that doesn’t seem too intrusive.

The hood on the Aqua Medic Kauderni features three cooling fans to push heat out from the aquarium, which is going to be needed with the four 24W T5 lights powering the system. We are fans of the color blend of the Aqua Medic T5s but could definitely appreciate a nice LED system to keep the temperature and power consumption down in the system. The hood allows you to access both the back and front parts of the tank to either feed your critters or get to the filtration compartment — a really nice feature.

Although the pressed-metal lid looks nice, when opening it up, you can see where this can be clunky. Also we can imagine having chipped finish around the corners would open up for corrosion. Bottom line, the hood looks nice and the features are good to have (fans and access to front and back), we could see using another material that could withstand the rigors of a reef environment.

We did appreciate the filtration and water movement of the Kauderni. Water enters the filtration chamber from multiple levels levels — the surface, top, middle and bottom of the aquarium — helping to get detritus and gunk from the entire water column into the filtration system. The filtration system uses the highly-efficient Turboflotor Blue 500 skimmer. While it may not win any beauty contests, the skimmer flat-out works and can pull some serious organics from the system.

Flow is covered by a PF 1000 circulation pump and a NanoProp 5000. Another nice feature is having a circulation pump on the opposite side of the aquarium and in the middle to help create some turbulence.

Overall this was a nice system and has many features that will interest most hobbyists but there are a few things the company should address to make this a better overall system. If you are looking to snag one of these, they retail for around $1,899.

Hands on with the incredibly thin Maxspect Razor