Any of the rare fish fanciers out there who’ve kept up with some of my writings know that I have a sort of infatuation with South Africa’s endemic tiger angelfish, Apolemichthys kingi. So, when I got the invitation to come to South Africa to speak at the Aquarium Expo, naturally one of the first things that came to mind was the prospect of getting to see the fish that I quasi-worship, either in the wild (slim chance) or in the aquarium of a local (better chance). I never could have dreamed that both options would yield viewings of tiger angels and boy was it awesome.

Although the tiger angelfish is only found around South Africa, it is not a common fish by any means. Small juveniles are only occasionally found in the shallows and large adults have a preference for deeper, cooler waters. At Umkomaas in Kwazulu-Natal, or KZN as the locals call it, the adults can be seen in relatively shallow water but it’s not tropical diving and the dive conditions can be quite challenging. Further north the tiger angelfish can be found in the more tropical Mozambique but in this region it prefers much deeper water where the temperature is low.

No matter what you do the odds of seeing a single tiger angelfish are quite low, but I along with Keith Baxter of Nemo’s Janitor decided to try our luck diving the Aliwal Shoal at Umkomaas anyway. Thankfully, we had an ace up our sleeve in the form of Vegard Kvam, Dive Master for Agulhas House and Dive Centre in Umkomaas. Vegard has been diving the Aliwal Shoal for over ten years and if there’s anyone who knows where to see a tiger angelfish it’s him.

When I told Vegard I wanted to see “Kings” he starts listing off a number of place where we can see King Fish, a type of large Jack. When I told him I wanted to see “Tigers” he started talking about tiger sharks. After a bit of confusion I finally succeeded in expressing that I wanted to see South Africa’s endemic tiger angelfish. Once the identity was cleared up, Vegard thought about my request to see this specific fish, scratched his head and told me that was the first time anyone had come to Aliwal Shoal to see that fish, but he said he knew of a place where we’d have a chance at seeing one.

On the spot Vegard came up with a sign for Tiger Angelfish we could use underwater which was three fingers held against the arm (like tiger stripes) and an upward pointed finger waved around in a circle (as if to indicate the halo of an angelfish). We struck off for the southern end of the shoal and I prepared myself to see a tiger angelfish for the first time.

If you’re a diver you’ve probably heard certain dive sites claim that “if you can dive here, you can dive anywhere”, but this is actually true of Aliwal Shoal. The launch point is the mouth of a river where breaking surf and tidal currents have to be expertly navigated by the captain of the dive boat. Once arriving at the dive site the whole crew of divers have to hit the water at once and swim straight down to avoid being swept off in the strong current. As if all of that wasn’t enough, once reaching the hard bottom divers are treated to a nice 12-15 foot swell in either direction. Needless to say, if you can dive Aliwal Shoal you will definitely earn some kind of stripes, and diving elsewhere will be a cakewalk.

So on my first dive looking for the tiger angelfish I was treated to lots of unique Indian Ocean fish species I had never seen, like plenty of Old Woman angelfish, lots of beautiful Anampses, Macropharyngodon wrasses and many other unusual fish. However, after about 25 minutes of diving I had not seen anything like a tiger angelfish, nor had I seen the kind of habitat I thought that an Apolemichthys kingi would like. Right when I had given up seeing one on this dive, I heard the klang from Vegard’s tank, he gave me the tiger-stripes-and-halo signal so I booked it over to where he was to see what I had come for.

At about 40 feet of depth, a large tiger angelfish was patrolling a depression in the rocky reef, and it immediately took notice of this large excited diver giving it some special attention. My subject was about ten inches (25cm) in length and really, really thick for an Apolemichthys, or any angelfish for that matter. I was struck by the bold markings and beauty of my first look at a live tiger angelfish, in its natural habitat. Unfortunately this tiger angelfish was not equally enamored with me and he bolted in the opposite direction from the dive group.

I thought that was the end of my quest but five minutes later Vegard klanged on his cylinder and repeated the underwater signal to alert me to another tiger angelfish. Just like the first one, this second tiger angelfish was also large and exceptionally thick, and again it was hanging around a depressed formation in the reef like the one before. I knew this large angelfish wasn’t keen to be under such intense scrutiny and sure enough, hardly 60 seconds had passed before he took off away from us.

This time I was determined to get at least one picture of the fish underwater as evidence that I had indeed seen the infamous Apolemichthys kingi, no matter how grainy the image. While fighting the swell and current I swam after the second tiger angelfish and succeeded in snapping just one image which won’t be gracing any magazine covers, but at least you can make out what it is. To help make up for my crummy picture of the tiger angelfish in the wild, Vegard shared with me a video he made of another tiger angelfish in the wild, a feat which he said used up about a quarter tank of air due to the tiger angelfish’s inherent shyness and reticence to be approached by divers. The video clip may be short but it’s very rare footage of this species in its natural habitat, so big thanks to Vegard for sharing it.

If seeing two tiger angelfish in the wild, the first rare fish I have seen in nature before the aquarium, if that was the end of the story I’d still be really happy with the 120 seconds I got to spend with one of my favorite fishes of all time. However, if you’ll recall back in February we wrote about a teeny tiny little baby tiger angelfish that was collected in the shallows by a South African aquarist named Pieter Uys. Thankfully, a local rare fish nut Yuri van Deventer agreed to take me to Pieter’s house where I got to spend about an hour staring at his gorgeous little fishy treasure.

Whereas at Aliwal Shoal I had to work and fight the cold and the current, while breathing underwater, chasing my fishy dream, at Pieter’s house it was nice and warm, sitting on a chair, enjoying some coffee and sat in total comfort while the baby tiger angelfish made the rounds of his Red Sea Max aquarium. The dichotomy of the experiences between seeing tiger angels in the wild and seeing the juvenile in an aquarium couldn’t be any different from each other, but in a way it was very complimentary. And unlike the skittish adults I was able to snap a ton of pictures and one really nice video of Pieter’s tiger angelfish.

Big thanks to Keith, Vegard, Pieter and Yuri for helping me to see the legendary tiger angelfish, now I’ve got to set my sights on a new elusive reef fish species, I’m thinking Apolemicthys guezei. 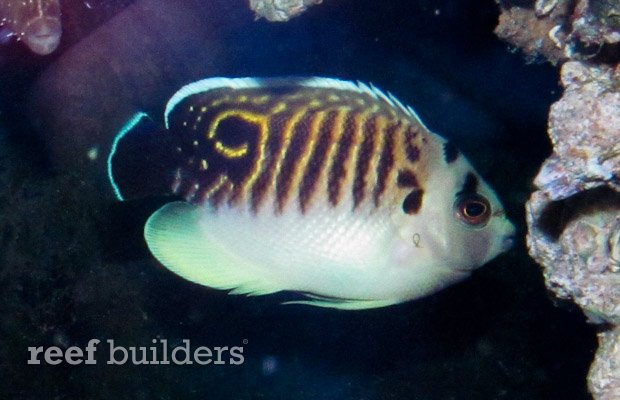 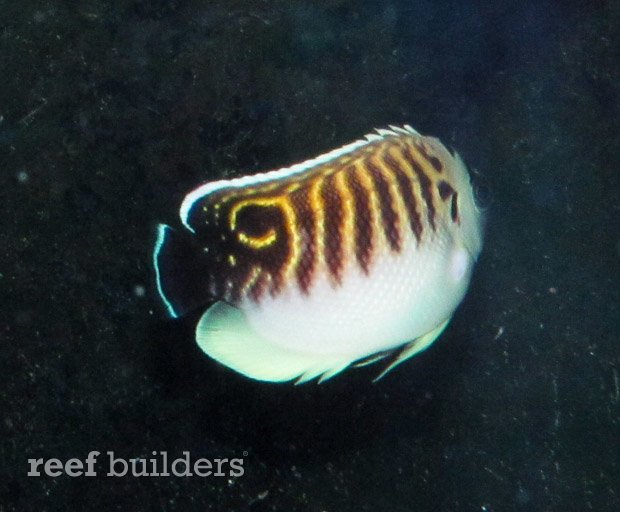 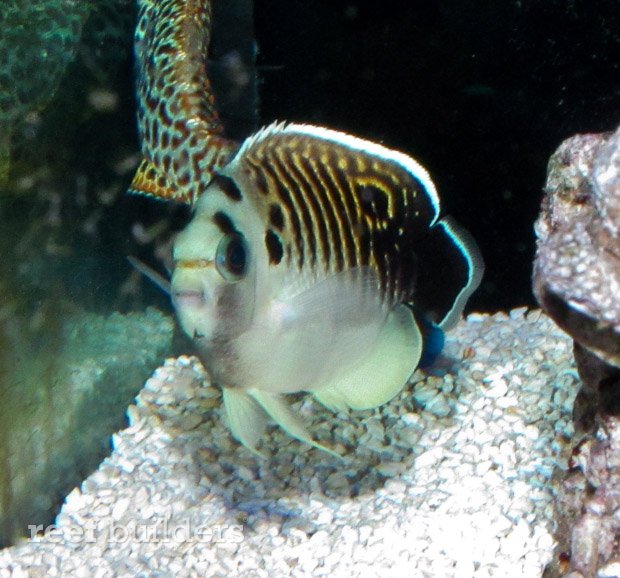 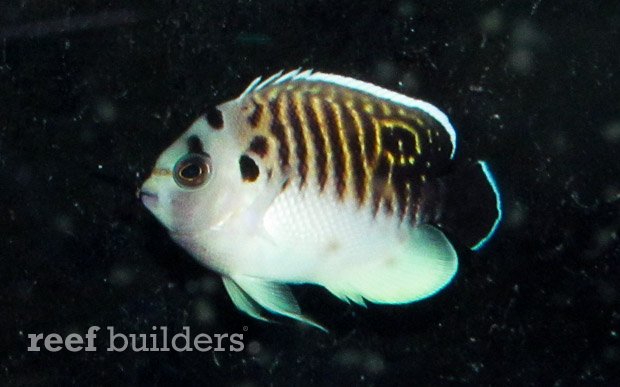 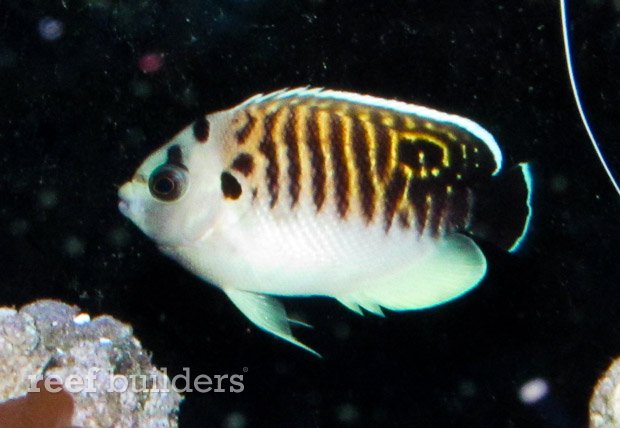 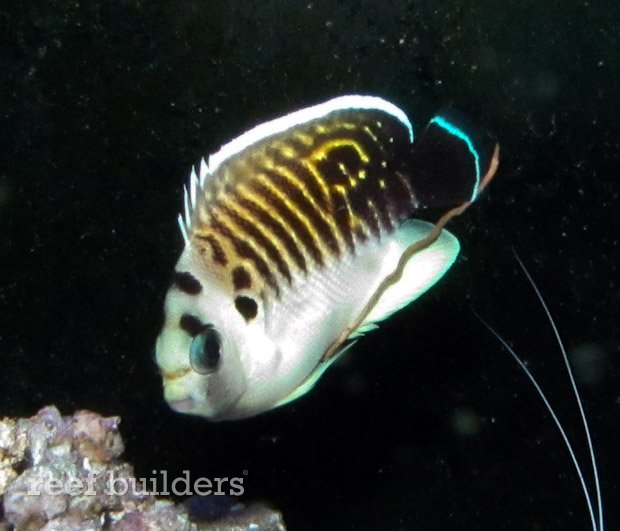 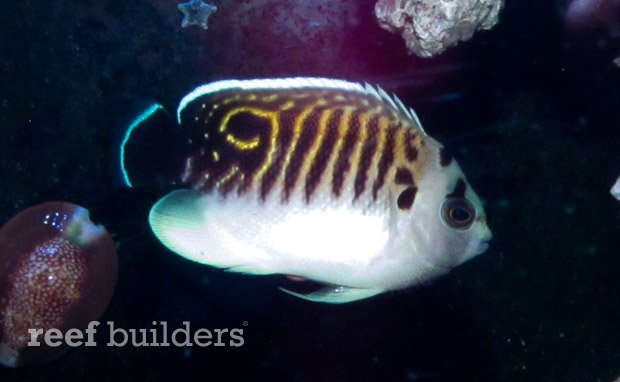 Vargas Cespitularia is a sensational purple and yellow Xeniid from ORA