Gomphosus varius: This Wrasse is for the Birds!

It always seems that the more exotic looking a saltwater fish is, the more challenging it is for hobbyists to keep. Fortunately, such is not the case with Gomphosus varius, the aptly named bird wrasse. This hardy, intelligent, attractive species has much to recommend it to fishkeepers who have sufficient aquarium capacity to accommodate its large adult size and demand for copious swimming space.

Banana with fins and a beak

G. varius also exhibits pronounced sexual dichromatism (differences in coloration between the genders). Males are a stunning bluish green while females tend to be more subdued in color, with a creamy-tan anterior giving way to a dark-brown posterior. 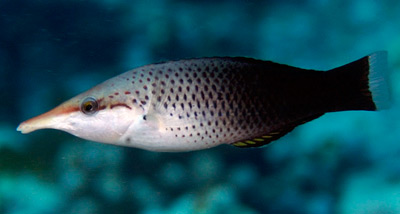 The bird wrasse is a robust, highly energetic fish that can reach nearly a foot in length. It also demands both a good amount of open swimming space and ample live rock aquascaping for refuge and to sleep in at night. This is not a suitable species for your average small to medium-sized system. My specimen is housed in a 125-gallon aquarium, and, having observed this species in action for some time now, I wouldn’t recommend going much smaller than that. G. varius does not bury itself in the sand like many wrasses do, so the depth and grain size of the substrate are irrelevant. A good tank cover is essential to contain this prolific jumper.

There’s no trick to feeding G. varius. In nature, it feeds primarily on crustaceans along with other motile invertebrates and the occasional small fish. Mine will accept virtually any suitably sized meaty food, including mysid shrimp, plankton, strips of fish flesh, chopped clams, chopped shrimp, squid, and probably several other items I’m forgetting at the moment. It will also gladly accept dry pellets, flakes, and even the algae sheets I put in the tank for my yellow tang.

Do be aware that the bird wrasse is a very aggressive feeder and can easily outcompete slower-moving species (and even some pretty fast-moving ones) at mealtimes. Mine seems to delight in stealing morsels right out of tankmates’ mouths. This really raises my tomato clownfish’s hackles (whoops! There I go again!), but the poor clown is way too bulky and clumsy to do much about it other than tremble in anger and sulk.

Any fish tankmates must be equally bold and assertive and too large to be made into a meal. In his book Marine Fishes: 500+ Essential-to-Know Aquarium Species (TFH Publications, 2001), Scott Michael writes that this species “will grasp an elongate prey fish in its jaws and bash it against the substrate until it breaks into bite-sized pieces.” This is no exaggeration. My specimen has done this many times with non-living meaty food items too large to swallow whole, and I once watched it expertly pluck a small stowaway crab out of the rockwork and batter it to death against a rock. Needless to say, small, slender fish, ornamental crustaceans, and other small motile invertebrates don’t make ideal tankmates for G. varius.