What to Consider When Keeping Toxic Marine Fish

Toxic marine fishes kept in aquariums present certain husbandry challenges that hobbyists should be aware of if they plan to purchase one. I’m not referring to fishes that possess venomous spines or deliver a venomous bite, such as lionfishes, rabbitfishes, and fang blennies, but to those capable of exuding toxins into the water with potentially deadly consequences.

For example, in the family Ostraciidae, the so-called boxfishes, cowfishes, and trunkfishes, there are numerous species that, when harassed or stressed, are capable of releasing a toxin (aptly named ostracitoxin) that can be deadly to all life in the tank, themselves included. 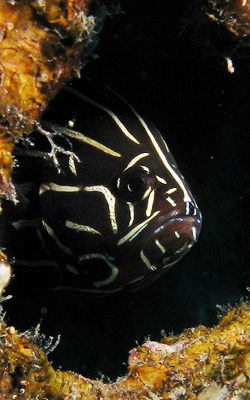 The so-called soapfishes (family Grammistidae) are another toxic lot. Under duress, they can exude mucus containing the chemical grammistin with similarly deadly results. The common name soapfish is derived from the fact that this noxious mucus can form a soap-like lather.

The purpose of such toxins is to discourage predators from making a meal of these fish, but hobbyists might wonder what good that does if the toxin ends up killing the fish that released it. Well, consider that Mother Nature never intended these toxins to be used in closed aquarium systems. In hobbyists’ tanks, there’s a “captive audience” of specimens that have no way to escape contaminants released into their environment. In the ocean, on the other hand, an exuded toxin will be diluted very rapidly after doing its job of leaving a nasty taste in the predator’s mouth.

So, what can you do to prevent a toxic fish from poisoning your aquarium?

The stress of shipping or the ride home from your local fish store can be sufficient to cause toxic species to release their chemicals in the very close confines of the shipping bag or container. This water should be dumped down the drain, never added to your aquarium. Of course, this is good advice in any case to minimize the risk of disease transmission, but the possibility of introducing poison should put an even finer point on it.

With a toxic species in your tank, it’s always wise to employ a chemical filtrant—i.e., placing a bag containing activated carbon somewhere in your system’s filtration/circulation system so water actively flows through it.

Make sure your water-purification arsenal includes a high-quality protein skimmer. It will be an important line of defense against potential tank poisoning.

In the event of a toxin release, it will be necessary to change out large volumes of water immediately. Be sure to always have on hand a good supply of clean salt water for just such an emergency. If you observe any behavior among your fish that could indicate poisoning—e.g., rapid respiration, disorientation, erratic swimming, etc.—go into action without delay. Even if you’re mistaken about the poisoning, there’s certainly no harm in carrying out a major water change.

Since bullying, the threat of predation, and other stressors can lead to toxin release, it’s important to provide toxic fish an environment that’s as stress-free as possible. Overly aggressive or hyperactive tankmates should be excluded, and every effort should be made to maintain exceptional water quality.

Generally speaking, toxic species should be introduced to systems that are set up and arranged specifically to satisfy their needs, never “shoehorned” into a mixed community on impulse.

Also, keep in mind that what’s going on outside the tank can cause stress. For example, from the fish’s perspective, kids running around in the vicinity of the tank may just as well be big predators ready to swoop in and eat them!

Keeping butterflyfish in reefs: What to look out for and what to avoid