When asked to look over the largest of the CadLights “Pipeless” skimmer range, I must admit to being initially skeptical. My first thought was how on Earth do you make a skimmer with no pipes-? Better yet, one that can be tuned to the individual specs of the tank? Within minutes of actually seeing this beast in action, it pretty much turned my traditional idea of a skimmer, with gate valve and overflow piping, on its head.

The idea behind the pipeless range is pretty ingenious, and when you think about it, the simplicity of the concept makes you wonder why no one came up with it before now. The way the CadLights PLS range have been designed is to have the skimmer essentially sitting on the pump. 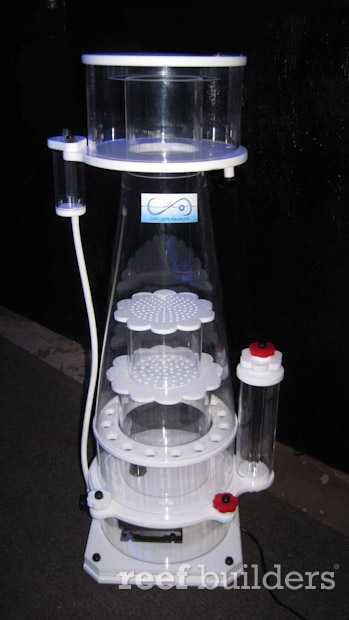 The pump draws tank water and air via an aspirator valve, and injects the mix into a mixing chamber centrally located inside the barrel. Two diffuser plates further mix and streamline the outflow of water to create a very fine bubble matrix in the upper portion of the skimmer.

Due to the cone design of the barrel, the water flows down towards the base leaving the bubbles behind, such that the release of micro-bubbles is minimized. The water then exits the barrel through the base and back into the tank- it is at this point that the “pipeless” magic happens. In the base of the skimmer barrel, and in the pump mount below the barrel are two matching holes.

It is through these holes that the water escapes. The amount of water escaping (and consequently the water column height in the skimmer) is dictated by whether the holes match up perfectly (fully open, lots of out flow, low watercolumn height) or partially occluded (closed, low outflow and high water column). 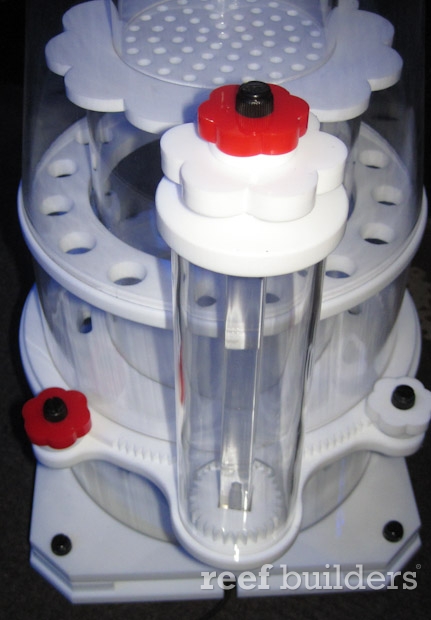 Adjusting the alignment from open to closed sets the foam height and thus the performance of the skimmer. To make this easy, the skimmer barrel is engineered to rotate on the pump mount housing and can be turned in either direction using the red geared “flower lock” on the side of the skimmer. This is conveniently raised to ensure that your hands do not get wet during operation. Thus the column height can be controlled very easily and accurately.

Once set, the barrel can be locked in place to prevent inadvertent turning during cleaning of the cup etc. In practice, a few minutes observation of the running skimmer is all that is required to achieve a stable foam head and your preference of either a wet or dry skim. Once running, there were minimal microbubbles during the break-in, and none thereafter. 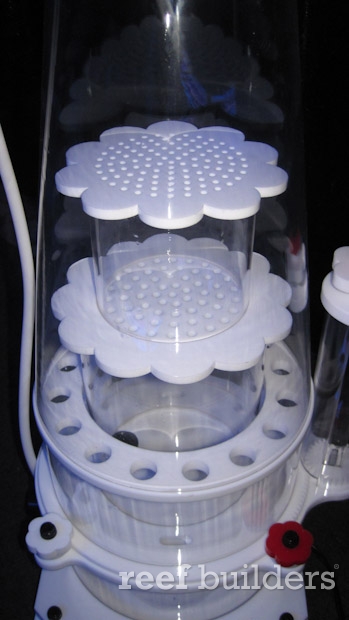 Besides being very easy to use and set, the other advantage of this arrangement is that PLS range have tiny footprints in comparison to similar rated skimmers. For example, the PLS300 has a footprint of only 11 by 9 inches while the comparable ReefOctopus DCS200 has a footprint of 16 by 11 inches. This makes the PLS range ideally suited to hobbyists with limited sump space.

Another advantage, albeit a minor one, of the pipeless design is that there is virtually no assembly required. Once the airline is fitted to the venturi and the air silencer, and the silencer mounted to the cup, the skimmer is ready to go. I estimate it took a minute or so from taking the skimmer from its box to being ready to use. In use the skimmer is almost silent and would not provide distraction mounted inside a fish cabinet in a living room environment. 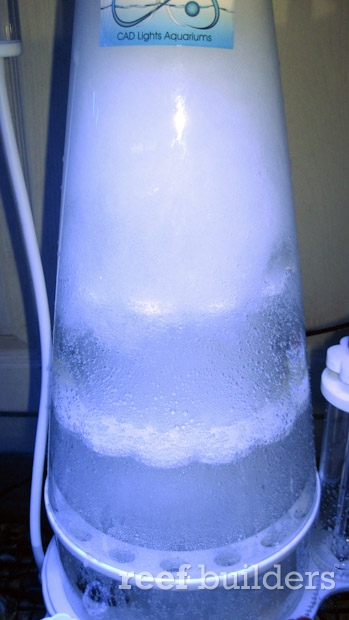 Once immersed (the skimmer was ran in 6 inches of water) the exit holes were fully opened and the pump turned on. As expected the barrel immediately filled with ultrafine bubbles with several inches to spare from the top of the cone. Adjusting the foam height required a small adjustment of the red gear key and the foam was set to coincide with the flange of the cup. After a few hours a small foam head had built up in the neck. By the next day the skimmer was “broken in” and producing copious quantities of wet skim. After another small adjustment, the water column was lowered, and the skimmer now set to produce a thicker foam.

For test purposes the skimmer was used on a well stocked 600 gallon system and has produced at least a capful of very thick skim every few days, and has continued to do so for the last month without pause or readjustment. For my purposes I have connected a hose to the drain port of the collection cup to remove the skimmate, however the cup itself requires periodic cleaning and it is at this point that I have encountered my only issues with this skimmer.

The cup is mounted to the skimmer body using a silicon flange, it slips in and out of the neck rather easily but doing so can cause minor turning of the barrel. This can have a major effect on skimmate production and is not an issue if you actually remember to lock the barrel in place once the foam is set to your requirements. 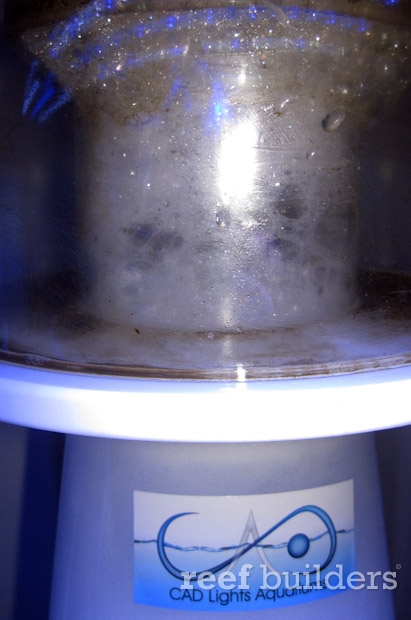 The other issue though is more problematic. The air silencer is mounted to the bottom of the collection cup with a plastic screw. Thus either the airline needs to be removed or the silencer removed before the skimmer cup can be washed. I left the silencer on the side while I cleaned the cup and inadvertently got water in the silencer, which necessitated some effort to remove. Ideally the silencer needs to remounted, or affixed in such a way that it can be easily removed during cleaning. However, these two points are really the only issue I have encountered during the month that I have used this piece of equipment- and both are relatively minor.

All in all, the CadLights PLS300 skimmer is well built, functions well and is extremely quiet. In addition, it is easily controlled and provides a neat, compact alternative to people with large (approx 300g) systems with limited sump space.