With the Toledo Zoo’s Aquarium currently undergoing a $25.5 million renovation and the new Aquarium slated to open in 2015, curious Zoo visitors frequently ask what exhibits the new Aquarium will feature. In this installment, let’s continue our exploration of these new exhibits with a look at some of the special marine exhibits that will allow visitors a view of aquatic animals living in frigid waters.

Please bear in mind that the planning process is fluid; things can and will change before the Aquarium’s grand opening. Additionally, the names for the exhibits are only placeholders—the final names may reflect helpful donors or be more descriptive of the exhibit itself.

Not all aquatic environments are like the beautiful coral reefs in clear, warm, sunlit vistas that you see while diving on vacation. Many of the richest aquatic environments are cold, with dingy green water. These cooler waters are higher in nutrients, supporting algae that, in turn, support a myriad of interesting sea creatures. Installment 7 discussed some of the cool-water species we will exhibit at the new Toledo Zoo Aquarium; this time, we’ll talk about some of the truly cold water species.

Special chilling systems connected to heat exchangers are required to lower the water temperature of these exhibits to a suitable range (in this case, 48 to 54 degrees Fahrenheit). An emergency back-up generator supplies electrical power to the entire building, as all of the life-support systems (including these chillers) must remain operational at all times.

Although a bit subjective, the following table lists temperature ranges for aquariums that have specific groupings of animals that dwell within that range:

Some regions, such as the Gulf of Mexico, have a temperature range that spans four or five of these zones over the course of a year. 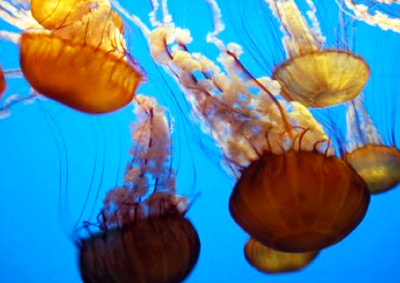 This unusual exhibit is 10 feet across and 8 feet tall, but only two feet wide. Its viewing window, 6.5 feet wide, will give visitors a panoramic view of the graceful Pacific Sea nettle jellyfish as they drift by. A translucent blue backdrop to the exhibit will display the jellies just as if they were drifting in the open ocean. Visitors often tell us that watching our old moon jelly exhibit was very peaceful, almost hypnotic. We can’t wait to hear their reaction when they see this exhibit! 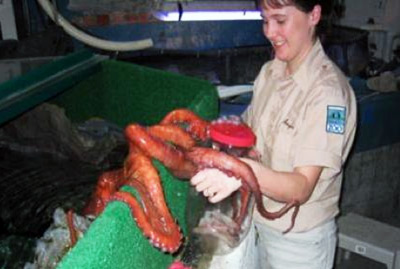 A signature exhibit in the old Toledo Zoo Aquarium was the giant Pacific octopus (or GPO in aquarium jargon). A major aquarium once sent a contingent of their staff to the Toledo Zoo to find out why we were so successful at maintaining this species. The new GPO exhibit will build on this success.

Of all the invertebrate species housed in aquariums, the octopus seems to be the most intelligent. We offer our octopuses a variety of engaging items, including the jar with food inside pictured below. These creatures soon learn to unscrew the lid to get at the food, but to date, we’ve never been able to teach one to put the lid back on!

An amazing variety of creatures live in the waters around Seattle, Washington and Vancouver, British Columbia. Most notable are the huge sea anemones and colorful sea stars from this region. Because of the cold temperatures, animals from this ecosystem have slow metabolisms and tend to be very long-lived. Some sea anemones in the old Aquarium were more than 30 years old when they were moved to another public aquarium (after our building closed for the renovation). 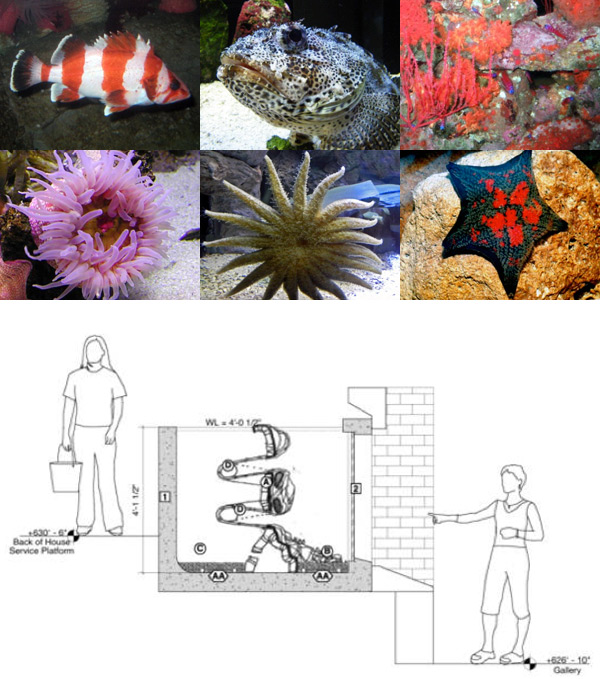 The next and final installment (for now) will take a look at what we suspect will be the most engaging and popular of the new aquarium exhibits: the shark and ray touch pool and invertebrate touch tank.