As we often discuss here at Saltwater Smarts, one of the frustrating aspects of the marine aquarium hobby is the fact that some of the species commonly or occasionally available in the trade have no business in the average hobbyist’s aquarium. Some of these species grow way too large for virtually any home aquarium, some have a highly specialized diet that is impractical or impossible to replicate in captivity, and some are just too sensitive to endure the rigors of capture, prolonged shipping, and repeated acclimation to different systems.

But we also need to add to that list the various cool-water species that are misrepresented (whether intentionally or unwittingly) as tropical species and sold to unwary hobbyists.

Here’s a sampling of the species you might come across that can be maintained in cool-water marine systems but won’t last long in the average tropical aquarium: 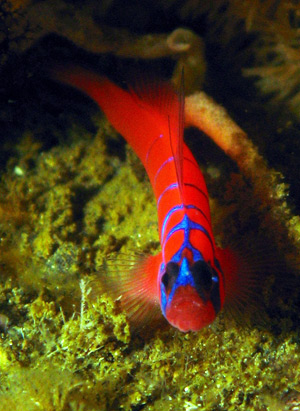 With its stunning reddish-orange coloration and electric-blue stripes, the Catalina, or bluebanded, goby (Lythrypnus dalli) is a real eyecatcher. Couple its good looks with its diminutive size and peaceful disposition, and you’ve got an ideal reef tank resident, right? Not so much, unfortunately.

L. dalli hails from the Eastern Pacific (from the Gulf of California to Equador and north to Peru according to FishBase) and thrives in waters ranging in temperature from the mid 60s to low 70s Fahrenheit. At typical tropical marine aquarium temperatures, this cute little goby is virtually assured a severely limited lifespan. 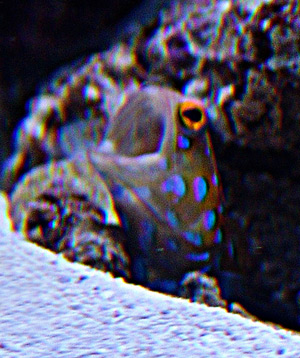 Another Gulf of California resident, the aptly named bluespotted jawfish (Opistognathus rosenblatti) appears in the hobby somewhat infrequently—and usually with a rather dauntingly high price tag to boot. If you should come across one of these beautiful, blue-spotted burrowers and feel tempted to buy it, keep in mind that unless you have a cool-water system, you’ll likely end up spending a lot of money for a specimen that you won’t have the opportunity to enjoy for long.

The good news is, there are several jawfish species on the market that are truly tropical and sold at a reasonable price—including my personal favorite, the yellowhead, or pearly, jawfish (Opistognathus aurifrons).

Moving into the realm of cool-water motile invertebrates, we come to an Eastern Pacific shrimp species—the Catalina cleaner shrimp (Lysmata californica), a.k.a. the peppermint shrimp. Like the aforementioned fishes, this shrimp is looking at a significantly shortened lifespan if kept in a tropical aquarium.

Applying the common name “peppermint shrimp” to this cool crustacean can cause a great deal of confusion since several other shrimp species, including a similar-looking member of the Lysmata genus, L. wurdemanni, are also known by this common name. However, being a Caribbean species, L. wurdemanni is a much better choice for the tropical aquarium. 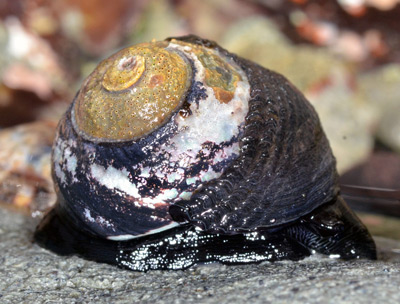 The so-called margarita, or margarite, snail (Tegula funebralis) is commonly sold to unwitting hobbyists as part of reef aquarium cleanup crew packages for the purpose of algae control. Alas, this Eastern Pacific snail has no business in such assemblages, as it is sure to perish after a short period if maintained at tropical temperatures—which is tragic since this species is known to have a long lifespan in nature.

I should point out that the common name “margarita snail” is also applied to various members of the Margarites genus, e.g., M. pupillus. But these, too, are non-tropical snails that won’t survive long if maintained at tropical temperatures.