You Can Succeed with the Copperband Butterflyfish

Copperband butterflyfish (Chelmon rostratus) are among my favorite fish and have almost always been a staple in my tank since the saltwater hobby started in the 70s. It’s not just the beauty of the distinct black-bordered yellow stripes on a silver body, but the unusual shape of this species that appeals to me. The snout, which is almost as long as its body, ends with a weak mouth that is not designed for defense or much else except to eat soft-bodied prey (or perhaps to blow up balloons).

In the sea, much of that prey consists of worms that they can capture even in quite deep crevices in the rock. The only defense the fish has are the stiff dorsal spines that it will turn towards a predator, but it can take care of itself as those spines are sharp and it also has the ability to wedge itself tightly in a crevice in the reef.

Copperbands, like their close cousins, the longnose butterflies, are a little more delicate than the majority of fish we like to keep, and unfortunately their life expectancy in many home aquariums is dismal. But I know copperbands can live at least ten years as I, and many other people, have kept them that long.

They are inclined to jump if kept with aggressive fish, as they tend to back up toward the surface while they are pointing their dorsal spines at the aggressor. When I’ve lost specimens, it’s usually been to jumping, as my 100-gallon tank is only 14″ high and copperbands normally live in fairly deep water.

I believe the biggest problem with these fish is that they are often damaged in collection or shipping. A healthy copperband should have no marks on it, such as faint dark patches, raised scales, or lumps. I have found after autopsying dead fish that those dark patches are from internal bleeding, possibly by internal organs or muscle being pierced by a rib.

Any fish as thin as a copperband has its ribs almost right against the outside of its body with a thin layer of muscle in between. This “design flaw” is a huge detriment to these fish, as they are very prone to injury. Sometimes the injury goes unnoticed for a week or two, but then the dark patch gets darker and the fish eventually dies. There is no cure for this, and the fish never recovers. A fatter fish (or, to be PC, a “plus-size” fish), such as a clownfish, doesn’t usually have this problem.

The good news is, it’s fairly easy to pick a healthy copperband butterfly. If it is swimming around looking at you, the ceiling, or a picture of Paris Hilton on the wall, it may not be in good shape, as they are always hungry. Healthy ones will be constantly staring at something on a rock or the sand that they thought they saw move. If they don’t find it, they move on to the next possible snack.

A fish on a mission

The copperband is not a particularly fast fish, but it is smart. The only reason it doesn’t do well on standardized tests is that it doesn’t have thumbs to hold the pencil, but trust me, it’s an intelligent fish. How do I know this? You just have to look at a tank full of fish and you’ll see. Most fish, like angels, tangs, and manta rays, just swim around aimlessly, but a copperband seems to have a mission. That’s how you can tell it is healthy. Copperbands also have personality, and each specimen has a different one. 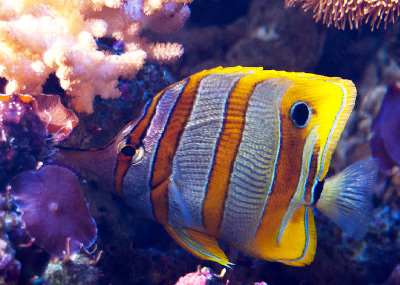 On the reefs, copperbands live on Aiptasia (indeed many hobbyists introduce this fish for the very purpose of eliminating these pesky anemones), tiny shrimp, fish fry, and worms. From my experience with captive specimens, some will eat Aiptasia, some eat only clams, and some eat only worms. But almost everything they eat is either crawling or sticking out of a rock. That is the purpose of that snout. They use it to pull tiny creatures out of their niches. So, as I mentioned, a healthy copperband should be constantly looking closely at either the substrate or holes in rocks.

The foods we feed to copperbands present another challenge. As I said, this fish is designed to eat soft-bodied, live foods, such as worms—and that is the preferred food for this fish. I feed them live blackworms and white worms every day. Of course they will also eat other things, but almost never will they eat flakes and pellets, which is something too many people try to give these fish. 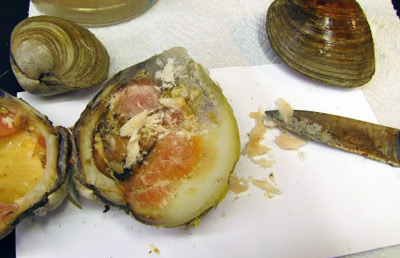 Besides live worms, you can give them small pieces of clam. I buy chowder clams (actually, I make clam chowder for myself and keep some clams for my fish, as they don’t seem to like chowder and it is messy to feed). I freeze the live clams and then, with a sharp knife, shave off paper-thin slices. My copperbands will eat this until they can’t swallow any more, and because clams are a whole food (guts and all), the copperbands thrive.

The only other thing I give my copperbands is frozen mysis, but I like the clams better, as mysis is mostly indigestible shell and provides bulk but not much else.

Ask to see it fed

So, if you find a copperband that looks alert, seems to be searching for food, doesn’t have any discolorations or missing scales, and is not shaking or staring at pictures of Paris Hilton, then ask the store owner to feed it (something besides live brine shrimp, as even I will eat those). If it doesn’t eat, don’t buy it. I don’t care if the employee says they just got the specimen, it was just fed, it’s a little stressed from transport, it just woke up, or it has a headache (or athlete’s foot or any number of things); don’t buy it!

Copperbands do not always come from pristine reefs, as they are also found in silty tidal inlets far from the coral reef. They are constant pickers, and a slightly messier tank, in which they can hunt and hopefully find a snack, is better for them. I don’t want to make it sound like the copperband butterflyfish is the easiest fish in the world and can be kept in damp sawdust instead of sea water, but it’s definitely not as difficult as a Moorish idol…or a manta ray.