A new study from Japan has found microscopic bacteria which can break down a popular plastic call PET. The findings, published in the academic journal ‘Science‘ on Friday, say that the new bacteria Ideonella sakaiensis breaks down the plastic by using two enzymes to hydrolyze PET and a primary reaction intermediate, eventually yielding basic building blocks for growth.
Poly(ethylene terephthalate), or PET, is a very common type of plastic polymer. It is often used in plastic water bottles and an estimated 56 million tons of PET were produced worldwide in 2013 alone. Manufacturers like using PET as it is lightweight, colorless and strong, however PET is highly resistant to biodegradation. Each year PET accumulated in the ecosystem and in particular the ocean. 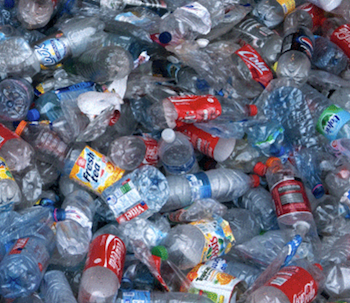 If you walk down the aisle in Wal-Mart you’re seeing a lot of PET,” said Tracy Mincer, who studies plastics in the ocean at the Woods Hole Oceanographic Institution in Massachusetts.
After seeing the accumulation of PET in the environment, Shosuke Yoshida of Keio University and colleagues started searching for a type of bacteria that would be able to digesting the plastic polymer. “Microbiologists know that microbes can do anything,” explained Yoshida.
The researchers collected 250 samples, like soil and  such as soil and wastewater, from a PET bottle-recycling factory. After analyzing the different species of bacteria that were growing within the samples they found one new bacterium, which they named Ideonella sakaiensis. They found this microbe could nearly completely degrade a thin film of PET after six weeks, at a temperature of 30°C (or 86°F).
The new species, Ideonella sakaiensis, breaks down the plastic by using two enzymes to hydrolyze PET and a primary reaction intermediate, eventually yielding basic building blocks for growth. Previous studies had found a few species of fungi can grow on PET, but until now, no one had found any microbes that can eat it.