It’s been a long time coming but the aquarium hobby finally has an informative video that tells our side of the story. The aquarium hobby, and especially the aquarium fishery in Hawaii, is under constant fire by detractors who have a complete disregard for facts and hard data.

But this new video by the Big Island Association of Tropical Fishermen is filled with facts about how the aquarium fishery is very heavy regulated and thoroughly managed. All of the data collected over two decades shows the populations of reef fish actually rising throughout the managed areas.

Kole tangs and yellow tangs show significant increases in population numbers, both in the marine protected areas and in the areas where the fish are collected. Part of the reason for this, besides thorough licensing, quotas etc., is that aquarium fishermen target immature fish, as opposed to mature fish in the case of food fisheries.

This means that, in the case of yellow tangs in particular, not all these fish will grow to adulthood, many of them will become food for other fish anyway. And with large, sexually mature adult fish left in the ocean, there is plenty of adults to repopulate the local reefs. 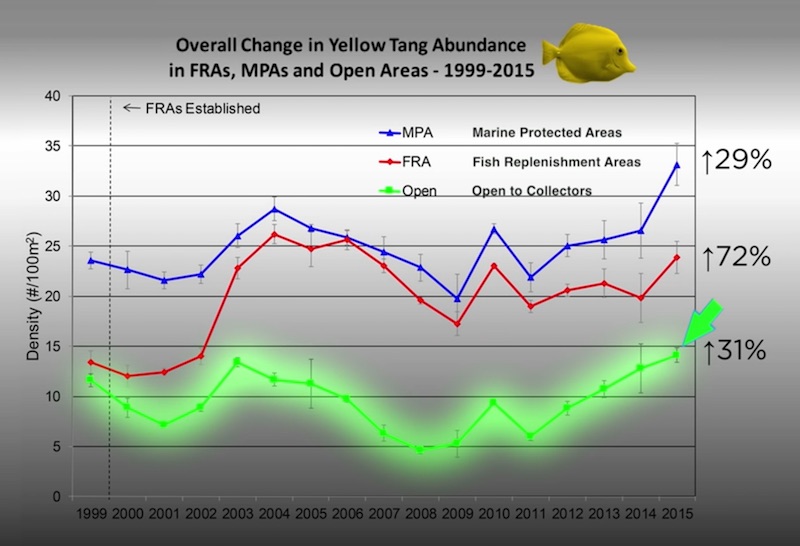 No matter how you slice it or which angle you use to look at the facts, the aquarium hobby is incredibly sustainable, it has huge economic benefits for local people, and aquarium fish are the best possible ambassadors when the public sees them swimming alive in an aquarium.

Without exaggeration, this is one of the most important videos defending the aquarium hobby to date. Definitely take the time to watch this video, even listen to it in the background while you work on something else, because this film neatly summarizes everything that is great about the aquarium hobby, for people and for coral reefs.

Face to Face With The One And Only Scribbled Watanabe Angelfish