Earlier this year millions of mysterious phallic object started clogging up fishing nets and washing up on beaches along the West Coast of North America. Populations of the non-native creature known as pyrosomes, are exploding along the West Coast frustrating fishermen and leaving scientist concerned about our future.
When they started turning up, fishermen didn’t quite know what to make of odd looking creatures and were shocked with the volume they would pull up in their nets. A research team from Central Oregon reported gathering an estimated 60,000 individuals in around five minutes of trawling with a net!

The name pyrosome comes from the Greek word “pyro” and “soma” meaning fire body and referring to their bioluminescence. Although, it has been noted that the pyrosomes off North America lack some of the bright bioluminescence found in tropical tubes, and perhaps this is because they aren’t consuming the right bacteria.
The strange creatures can be up to two feet (60 centimeters) long and have a prickly squishy texture like a jellyfish. Their tropical counterparts, however, can grow to an astonishing 30 feet (10 meters) long.
Pyrosomes are typically found off the west coast of Northern Africa, the Mediterranean Sea, Australia, and Florida. Underwater their bodies are ridged like a sea cucumber but outside of the water they slowly deflate into a gelatinous pancake. 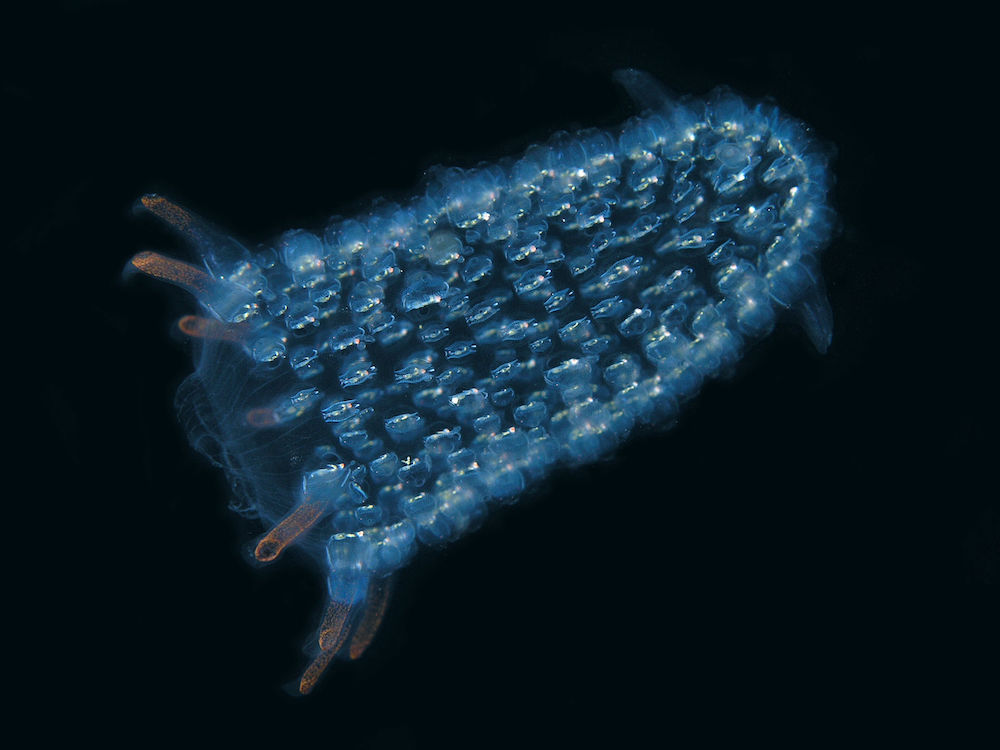 Pyrosomes are even more bizarre once you dig a little deeper. These tubular creatures are free living tunicates found living near the surface of the ocean. And each pyrosome is a colony made of thousands of individuals multi-celled animals called zooids. Each zooid has their own function, some specializing in feeding, excretion, reproduction, or defense.
The pyrosomes can reproduce asexually by cloning themselves forming colonies in the shape of hollow tubes. And, they also have the ability to reproduce sexually and form entirely new organisms, meaning they have two methods of rapid reproduction.

Impacts To The Marine Food Chain

Aside from becoming a nuisance in fishing nets, the pyrosomes pose a serious risk to the marine food chain. Pyrosomes are filter feeders and eat microorganisms from the water column called zooplankton.
Zooplankton are the foundation of the marine food chain which also supports populations of shrimp, crab, mollusks and other filter feeders like whales. If the nutrient poor pyrosomes out-compete nutrient-rich animals this puts a dent in the available food source all the way up the food chain.
No one is quite sure what the pyrosomes are doing along the west coast, but one theory is they were caught in the unusually ‘warm blob’ of water hanging off the west coast in 2014. It is still unsure if they will be able to reproduce as quickly once cooler waters return to the coast.
The pyrosomes invasion is a definite sign of the times. The ocean is heating up with mysterious and unpredictable consequences. [CBC]