In the world of aquarium stony corals, the ‘Bali Green Slimer’ has been the king of green SPS for more than twenty years, since the mid nineties. This particularly tenacious strain of green Acropora yongei is so prolific that it even has an analogue in Australia called the Dallas Acro – and it is one of the first acroporas that beginners are successful in keeping and growing. 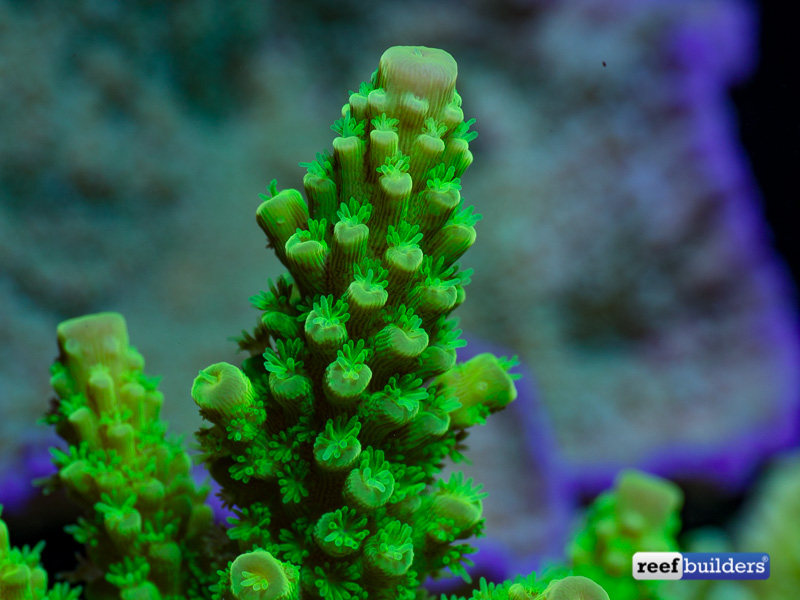 Most of us stony coral lovers are rarely looking for a new strain of green SPS, but there is one coral with a color so bright, so fluorescent, that it just might change your mind about green Acros. This intensely colored strain of Acropora florida first came to my attention about eight yeas ago when I spotted it growing in the aquarium of Kevin Pockell at Aquatic Dreams in Spokane Washington.

At the time ‘Kevinpo’ had a wicked nice stony coral reef with a huge stand of stagorn acros and a huge colony of what I now call the Toxic Green Florida Acro. I never forgot just how intensely green this colony of A. florida was – I just couldn’t believe how much brighter it was then his great looking Green Slimer colony – both grown under intense metal halide lighting at the time.

See also  The Transformation of the Shining Dragon Acropora

This coral had nearly faded from my memory until two years ago when I visited the reef aquarium of Robert Wurst in the Netherlands. Robert loves Acropora florida and had his fair share of strains of this species, including a brilliant strain like the Toxic Green Florida. While the body was highlighter green like the Kevinpo example, it also sported the orange tips that are sometimes prominent in A. florida, and more obvious in A. sarmentosa.

But my love affair with the Toxic Green Florida Acro finally came full circle this fall when I scored a beautiful large frag of this coral strain from Josh Newsom of Dynasty Corals. If you made it to Reefapalooza in California last month then you would undoubtedly have seen Josh’s spread of SPS corals which was one of the nicest I’ve seen at a reef show in a long time – big pieces, multiple branches and bright as all heck! When I looked over his corals there were many different strains but as soon as I saw the highligher green Acropora florida, I knew exactly what it was and where it had come from. 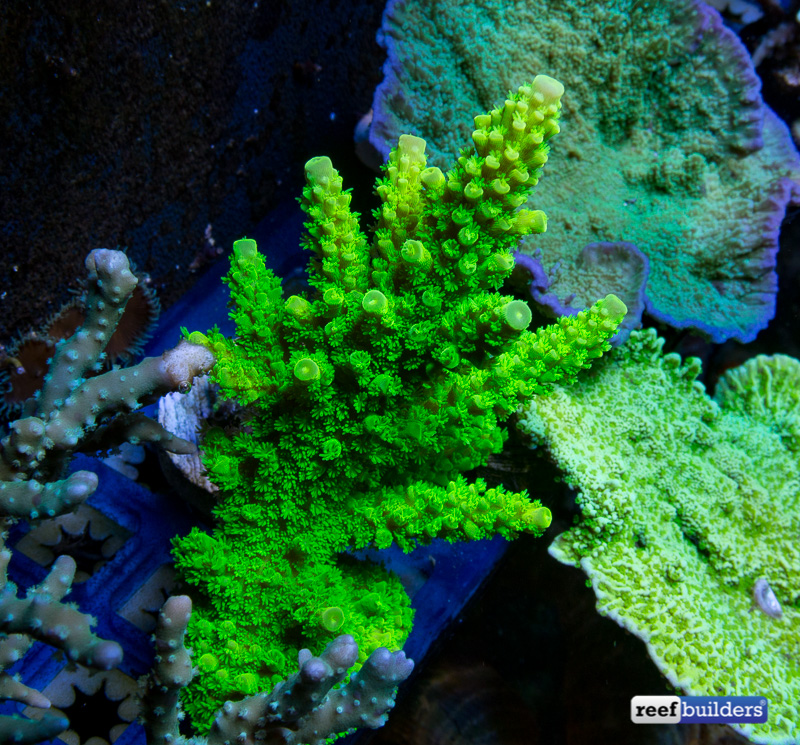 The brilliance of this coral has only increased since being in a high light level of my reef tank and you’ll just have to take my word for it that this coral looks oversaturated in real life. It’s important to mention that Acropora florida is very common in the wild, and it is a very prolific species for Indonesian coral culture. However, I’ve yet to see any farmed or wild examples quite as bright as the first one that stole my heart in Spokane.

In pictures the Toxic Green Florida might look like just another green acro, and it will definitely fall short of expectations  if you try to keep this coral in a medium light environment more suitable for LPS. But if you give this coral a true high energy SPS exposure to bright light and strong flow, you’ll enjoy the peak of coral color and brilliance.