Spotting coral can be overwhelming when everything looks the same. However, learning to recognize corals based on growth forms in the easiest way to master the art of coral spotting.
Plating corals are found in all reef habitats from wall to reef tops. The plates can be wide and smooth or leafy and crinkled on the edges like a lettuce leaf.
Plating corals have adapted to living further down reef slopes by spreading out their skeleton. This allows them to capture more light which feeds the photosynthetic algae living inside their tissue. 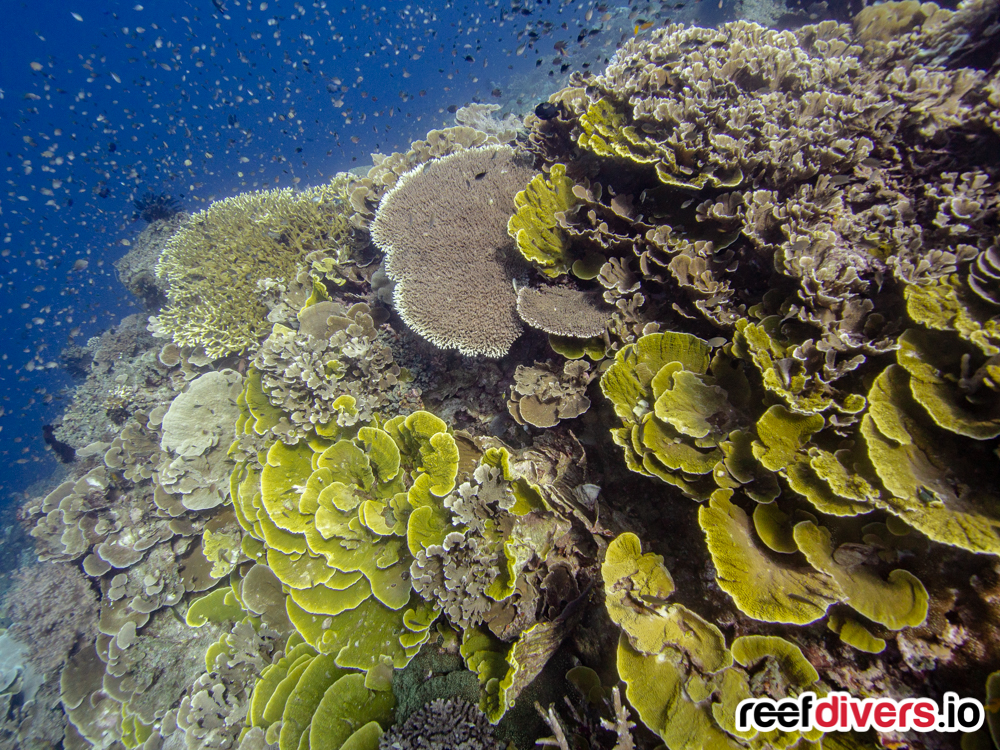 Some plating form starts turning in on themselves or growing into overlapping tiers. This unique shape can help trap particles of food passing in the current. The common name for this growth form is lettuce corals, cabbage coral, scroll coral, or plate coral.
Plating corals are attached to the rocks sometimes by the center of the coral or sometimes at one edge. These corals don’t waste time! Once attached they begin reaching for the sunlight and growing outwards and upwards.
The thinner plates grow quickly, and with optimal condition, some species like Echinopora can grow a few cm per month! Tricker plates like Turbinaria might only grow a few cm per year depending on its age.
Here are six types of plating coral you can identify in the Indo-Pacfic

Montipora is the master of disguise and comes in just about every growth form imaginable. Montipora has small corallites which are embedded in the surface of the coral and they are usually found between ridges. Montipora can be many different colors and you have to look closely at the polyps to spot polyps with contrasting colors from the coral tissue. You can find Montipora with a combination of grow forms, some of the colony can be encrusting and then turn into a plate, even sometimes growing branches from the plate.

While the majority of Acropora are branching, there are still a few species which are plating. Some species of Acropora have branches which extend vertically to the side instead of straight up. Sometimes the branches are spaced wide apart, so you are able to through the colony like a lattice. Other times the branches are completely fused together. The way to tell if this is an Acropora is by looking for the Axial corallite.

Echinopora forms thin plates with extensive colonies that can dominate reef slopes. One of the ways to tell Echinopora is by looking at the top of the plate and looking for round, domes shapes corallites dotting the surface of the coral. Echinopora has distinct corallites which can align in rough lines or a random pattern. But there will always be gaps between each one. Be careful around Echinopora as this coral is quite fragile.

Turbinaria coral was one of the first genus of coral we ever learned to identify. It really stands out with large polyps that are extended during the day. You can surely spot the bright yellow Turbinaria scroll coral! Turbinaria forms thick plates, and if you come across a mature colony it would be very difficult to break the thick skeleton, however, you should always avoid touching corals, as even the smallest touch will remove protective mucus covering the corals surface.

Mycedium is coral which is super easy to identify. You can recognize this coral by the nose shaped corallites which always point toward the outside of the colony. Mycedium corals can grow as a single plate or large colonies which can dominate reef slopes. You can often find plating, Mycedium, Echinopora, and Turbinaria corals growing together.

Mycedium corals, however, are much brighter in color then Echinopora, or Turbinaria. Be on the lookout for Mycedium with three or four colors, with brightly colored oral disks inside the corallites.

Symphyllia corals are often called brain corals because they have large sinuous valleys. Most colonies are around 30cm in diameter but larger colonies can be several meters across.

Symphyllia corals can be several colors but often they are found in a brilliant red with bright yellow mouths. You can also found grey colonies with yellow or white mouths which have a similar appearance to Lobophyllia corals, however, the biggest difference and one distinguishing characteristic of Symphyllia is that is forms one single skeleton with tissue and wide valleys.

Boring Bivalves Can Eat Corals from the Inside!

Zetlight QMaven 2 has No Fan, Better Lenses, and is Waterproof!