RoboCoral: Turning a Pump Mover Into a Coral Mover

RoboCoral is the beginning of a project we’ve wanted to do work on for a very, very long time. As aquarists we work so hard to try and achieve total water flow in the aquarium, eliminating any dead zones of water movement, as well as exposing our corals to an even, uniform light field by trying to blanket the aquarium in light, but what if there was a better way?

When we first began keeping ‘mini reef aquariums’, as they were then called in the mid-nineties, we read a cover story in one of the ancient texts called magazines about a company that specialized in making rotating aquariums. These special displays rotated the entire cylindrical tank slowly, switching direction about once an hour and while we never actually saw one, the idea it planted in our mind never went away. 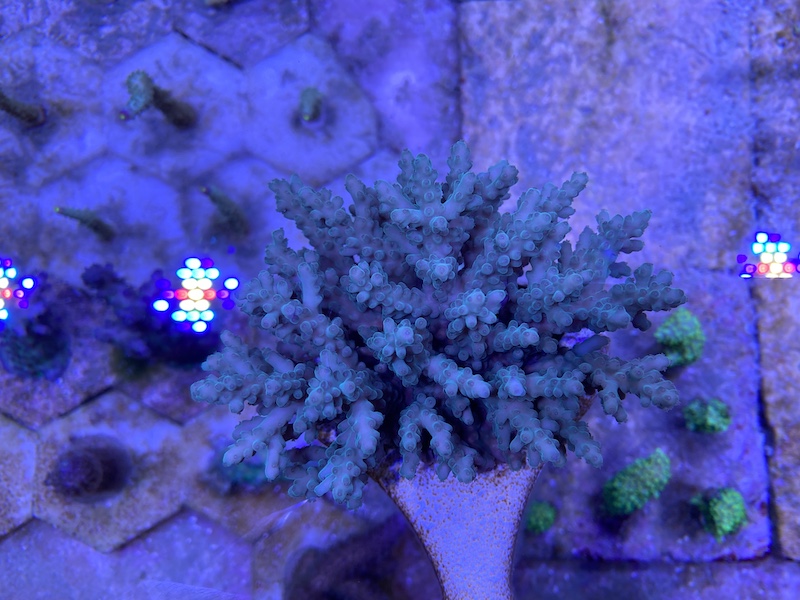 Before LEDs all but took over the illumination of living corals, powerful metal halides were the norm in larger tanks and commercial applications, often attached to light movers gliding slowly back and forth. We’ve always wondered what it might be like to move a coral within an aquarium, instead of moving the light, randomizing the flow, or moving the entire aquarium.

About a year ago we got our hands on a generic water pump mover, meant to attach to a propeller style pump to rotate the outflow sweeping back and forth across the aquarium. Immediately we knew we would be repurposing it not to move a pump but instead to attach a coral to it in an effort to benefit one lucky coral colony to a range of light and water flow, it was always going to be an Acropora.

About a month ago we finally got around to trying out our little experiment, and it came together surprisingly easily and quite well. We didn’t want the coral to merely rotate in place, so by using a medium length, handled scraper from Continuum Aquatics, we were able to extend the range over which the coral would be moved.

We drilled a hole in the mounting section of the pump mover just barely big enough for the handle to stick through, and then simply glued the flat base of this coral to the business end of the Continuum algae scraper, which comes with a perfect 10 degree angle to point the coral in the general direction of the light source.

#RoboCoral – we used a pump mover to make a #CoralMover, exposing it to varying levels of light, exposing different sides of the branches to light and water flow. Why you ask? No real reason except it’s fun, and curious to see how this #Acropora #Coral grows in this #ReefAquarium. #ReefBuilders #ReefStock #ReefBuildersStudio #SPScoral

After a month of this treatment it’s hard to say whether the coral is enjoying its ride across its prescribed arc throughout the tank. This system is already pretty bright, with lots of flow, and a population of diverse, fast growing SPS corals that are already in excellent condition.

The effect of having this coral oscillate back and forth across a foot of this coral aquarium is fun in itself but it also exposes every side of the coral, and the side of each branch, to a range of lighting intensity and water flow speeds. To be perfectly honest, we are personally enjoying this ‘robot coral’ and the creative approach to try and boost this coral’s growth and vitality; so we’ll keep an eye on it to see if it ‘responds’ and if it doesn’t we’ll try out some more corals to see if they enjoy this unusual treatment.

Salty Q&A: Can I Kickstart My Cycle with Aquarium Water?