‘Scribbled’ Hydnophora is a Coral Strain for the Connoisseurs

If there’s one group of corals that hans’t yet had its collector hype moment it’s definitely the Hydnophora horn corals. With a very consistent color across a handful of species, a unique ‘scribbled’ Hydnophora we spotted at Worldwide Corals last week really caught the attention of our inner coral connoisseur.

On the one hand, the horn corals grow very quickly, are stupid hardy, and are the most radioactive green color of almost all the so-called SPS corals. But because it grows so fast and since so many corals are available in green, there’s not too many hobbyists clamoring to get their hands on yet another green coral.

On its own we might not have recognized the interesting color of the unique Hydnophora growing out in one of Worldwide Corals’ many brood stock tanks at their frag farm. However since it was sandwiched between two more typical fluo green Hydnophoras, the interesting coloration of the ‘scribbled’ horn coral caught our eye.

Interestingly, Hydnophora corals do not have the typical well-separated and defined individual polyps of other branching stony corals. Instead horn corals have what is called a hydnophore, basically a large raised bump in the middle of meandering corallites. In nearly all Hydnophora the color is uniform throughout the entire coral, but the scribbled Hydnophora has interesting blue-grey tentacles that looks really cool, and accentuates the meandering tentacles of these underrated corals – hence the scribbled moniker that we are using to describe it.

This strain is truly one for the coral connoisseurs because it doesn’t have retina-burning rainbow colors that are clutch for getting attention on instagrams. Instead it takes a little more patience and scrutiny to appreciate the original pattern of this particular horn coral, and it’s no surprise or accident that we came across this strain at the Worldwide Corals aquaculture farm. 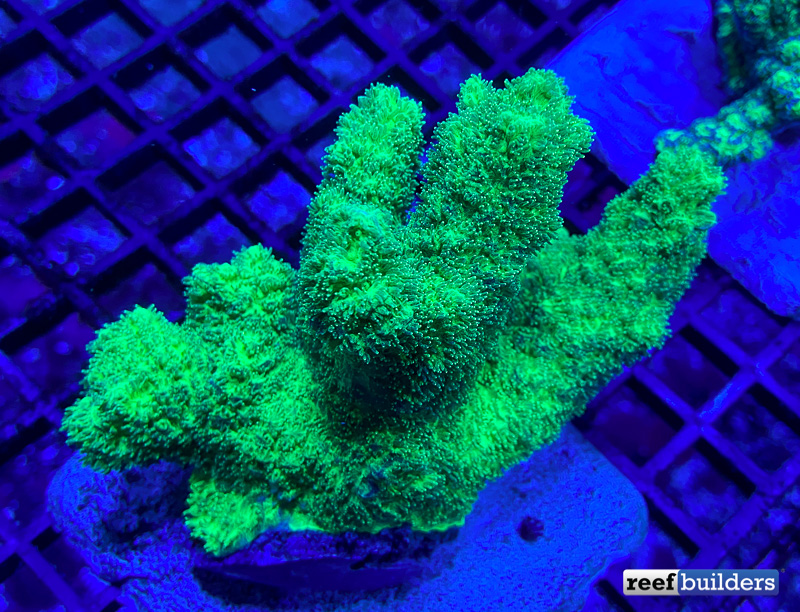 The subtlety of the scribbled horn coral is probably one we’ve seen before but never took attention of, and since we haven’t been scanning them for these unique details, we have no way of knowing how rare or common this horn coral strain is. Again, it’s not a jaw-dropping new morph but if you already have some appreciation for the bright color, fast growth and super hardy nature of horn corals, definitely look out for the more subtle features in some of the more overlooked coral groups, including the very deserving Hydnophora corals.