Admittedly we’ve never been big fans of microalgae turf scrubbers, preferring instead to use dynamic Chaetomorpha growth in our own signature spinning style. However there’s been a small sustained community of reefers who have employed various models to manage the nutrient levels in their reef aquariums.

We love DIY and how much the movement has carried the hobby through the decades but many of the commercially available algae turf scrubbers have been a little too DIY. For years many algae scrubbers have consisted of little more than PVC fittings haphazardly glued together with cheap LEDs slapped on the side of them.

It’s with this preconception in mind that we were pleasantly surprised to see that Turbo Aquatics has been putting a lot more effort into their algae scrubbers. The housing itself appears to be custom made of molded plastic so you can clearly see the growth rate and amount of algae growth.

The primary algae growing screen is complimented by a thick, secondary mortar screen to enable a succession of algae growth beyond just the fine hair microalgae. The square slot pipe feeding water to the living mat of algae is fine tuned to evenly distribute water on both sides and doesn’t pinch in the way a cut piece of PVC pipe does.

All these features appear like they would improve the performance of the Turbo Aquatics algae scrubber on their own, but the driving force behind the algae growth is the LED light and Turbo has designed a light fixture with optimized light spectrum and LED layout. Whereas off the shelf LEDs with a horticultural spectrum usually use 460nm royal blue and 630nm red LEDs, the Turbo Aquatics LED light uses 420nm violet and 660nm deep red LEDs for more photosynthetic activation and less photosaturation of the algae. 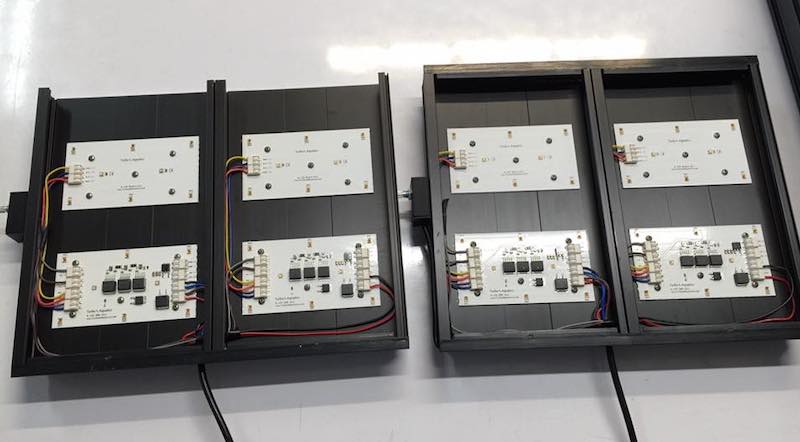 Better yet, the LED has a power control knob so that new algae mats can be eased to maturity with less intensity to start, and the light output can be turned up as the mat becomes thicker and denser. Adjusting the light intensity can also help to fine tune the actual rate of nutrient export so your algae scrubber light is not sticking users with all or nothing operation.

All of the features listed above are the culmination of Turbo Aquatics refining their approach to algae scrubbers for at least five years. The fifth revision will start becoming available in April to May of this year starting at $399 for the L2 model with several more larger models also in the Turbo Aquatics product range.