The flashing blue tang is a very unusual specimen of Paracanthurus hepatus which is unlike any surgeonfish, or any other fish we’ve encountered save for one. This strongly aberrant individual is mostly normal in the front half of the body but there’s some serious glitching happening on both sides of the rear half of the body that doesn’t follow the norms of what this species should look like.

Most regal blue tangs are a classic blue overall with a large black ‘claw’ shaped marking stretching from the yellow tail to the the eye and we are well familiar with Indian Ocean strains which have a yellow ventral area of varying degrees depending on the specimen and the maturity. However this strikingly bizarre individual collected by Golden Ocean in Papua New Guinea, firmly in the eastern Indo-Pacific, decided he was going to join the belly club as well – some of the time! 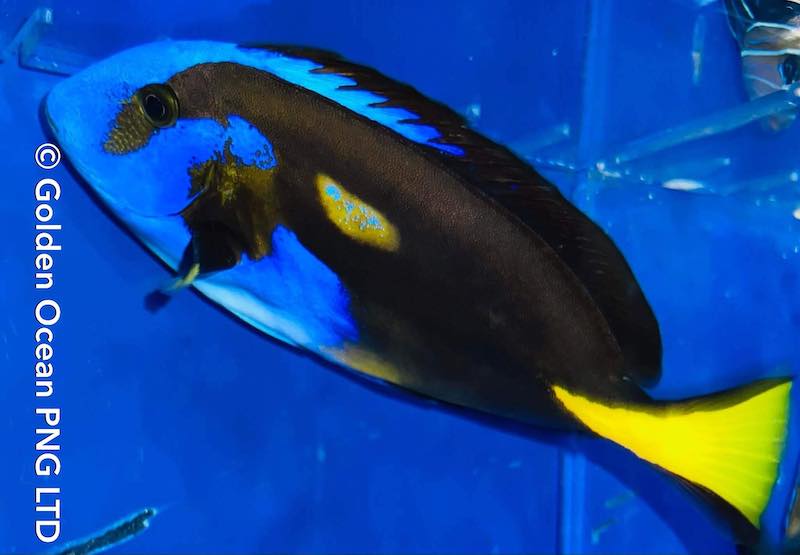 What makes the flashing blue tang one of a kind is that the yellow belly appears to be ‘indeterminate’ in that it can quickly change most of the yellow coloration of its posterior to black and back to yellow in just a few seconds. The only other marine fish known to exhibit this unusual color changing attribute is the aptly named flashing tilefish, Hoplolatilus chlupatyi, which is revered for its color flashing behavior.

We have no real theory to help explain how and why this aberrant regal blue tang from PNG is both yellow bellied and has developed a very rare color flashing phenomenon except for the size and age of this unique fish. Like most of the aberrant surgeonfish that are collected for the aquarium hobby nearly all of them are quite large and mature so perhaps a similar misfiring of the pigmentation is happening in Golden Ocean‘s new prize from Papua New Guinea. 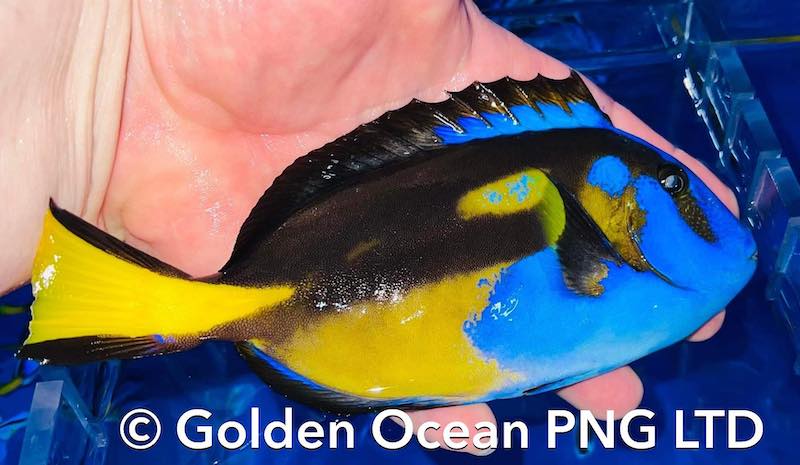 The flashing blue tang has yet to be observed in a more normal and stable aquarium environment so it’s anyone’s guess as to how pervasive the color changing behavior might be in its forever tank. The patch of aberrant coloration might ‘lock in’ to be all yellow, all black, it could change throughout the day or at night, but it does appear that at the very least the future owners of the flashing blue tang will enjoy a nice patch of yellow within the black crab claw marking that is peppered with a few teal blue spots. 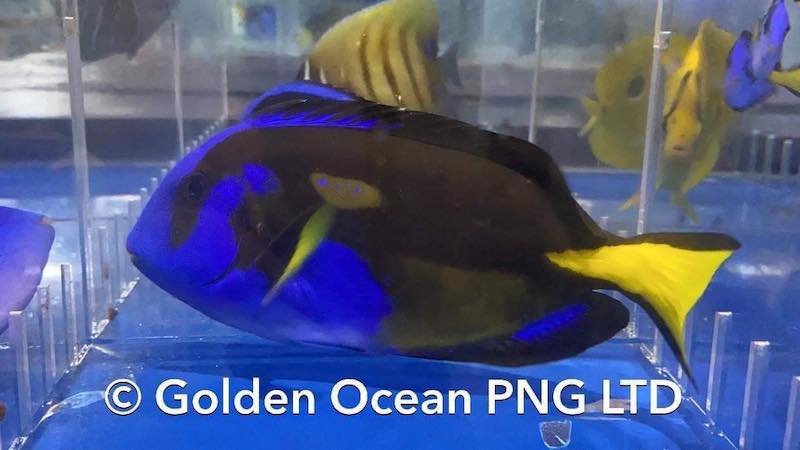