Just over a month ago we shared with you the story of the Pharos LED, a Chinese made LED with a slightly different take on design and features. In the meantime CoralVue has already secured US distribution of the Pharos LED and they’ve also started showing off the third generation of the Pharos LED which is packing Cree XM LEDs and a plethora of other LED colors. On paper the 3rd gen Pharos LED is using a broader range of LED colors driven at higher power than the one watt banks of it’s predecessor but it remains to be seen how well the different LED colors blend when used with focused secondary optics.

The Pharos LED is perhaps the first reef light to run the Cree XM LEDs at their full 10 watt potential and these are widely spaced on a passive heatsink. Two banks of Cree XM LEDs sandwich the colored LEDs including a shade of red (620-640nm), purple (~420nm), blue and royal blue although the fixture we saw was only outfitted with the 460-480nm blue. All of the colored LEDs are being driven at 2.5 watts and all are made by Cree except for the purple which is not available from said manufacturer. The Paros LED has control of multiple color channels that are independently adjustable from 1 to 100%, and some pre-set programming allows for sunrise/sunset and passing cloud simulations.

No word yet on when this 3rd Generation Pharos LED will become available or for how much, but with the AI Phoenix really blazing a trail of value in performance LED lighting, now more than ever the cost of this LED light will determine whether or not it has a future in lighting American reef tanks. 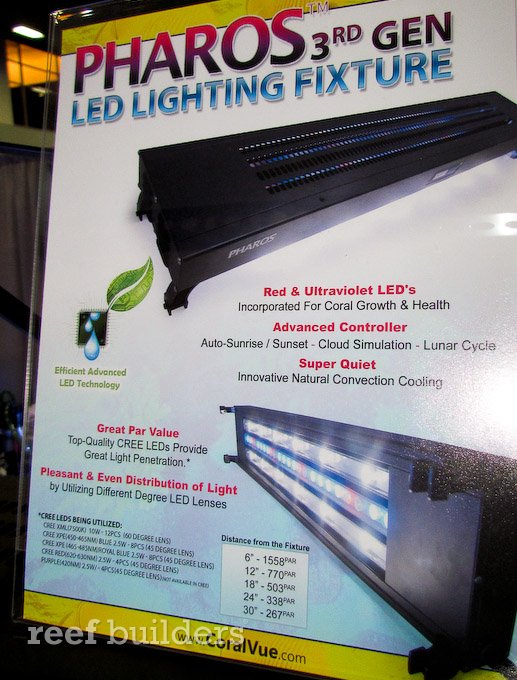 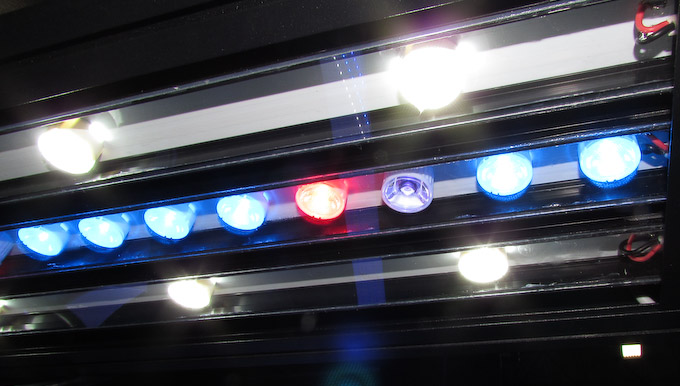