Liopropoma emanueli is a stunning pink and yellow basslet from Africa 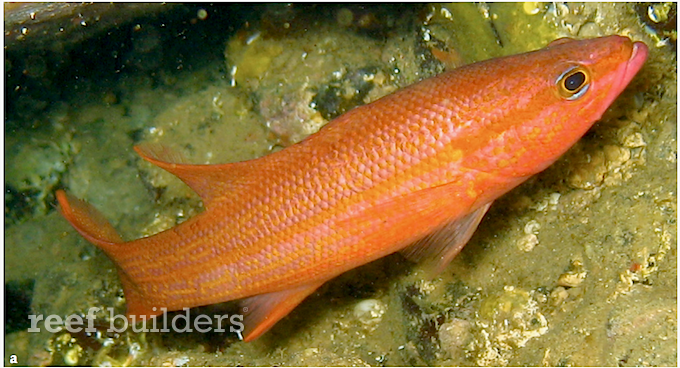 The new Liopropoma emanueli was first discovered by Peter Wirtz and Emanual d’Oliveira while diving a wall near Tarrafal, Santiago Island, Cape Verde Islands at a depth of 32 meters (~105 feet). The two divers returned to the dive site with miniature harpoons with which they successfully captured two specimens of Liopropoma emanueli to use in the formal taxonomic description.

Liopropoma emanueli has the typical angular face of this genus of basslets, with a torpedo shaped body and it has the distinction of being the only Liopropoma species with a clearly separated dorsal fin – other species have the soft and spiny dorsal fin joined. The body of Liopropoma emanueli is mostly orange to pink throughout with one prominent yellow band stretching from the tip of the snout through most of the body, with numerous small yellow longitudinal yellow lines along the body.

See also  Reef Pro Loves Liopropoma Basslets as Much as We Do!

As if the description of a new species wasn’t exciting enough the paper includes a photograph of a completely different Liopropoma from Sao Tome, also on the West coast of Africa. The undescribed Liopropoma from Sao Tome has a greyish overall body coloration, outlined in a dorsal and ventral yellow line, and a bold yellow line through the center of the body. The one fuzzy image of the unknown Liopropoma bears some superficial resemblance to Liopropoma aberrans but the authors mention the personal observation of another Liopropoma species in Brazil which has yet to be photographed or collected.