ReefBrite’s Twinarc dual-envelope metal halide lamps have been around a while now, long enough to get ripped off and to be developed into ridonculous 1000 watt behemoths. While touring behind the scenes of the Denver Downtown Aquarium we came across a stockpile of 1000w Twinarcs which are slated for being installed over their fabulous 5000 gallon reef tank.

Unlike conventional Twinarcs with envelopes end to end, the jumbotron thousand watt Twinarc lets the envelopes cozy up next to each other to reduce overall size, barely. Like the ‘old school’ Twinarcs the thousands come in dual color configuration and they alternate the firing of one envelope to have some kind of long term color mixing, or simply to extend the usability and reduce servicing of lamps.

The reduced maintenance schedule of the 1000 watt Twinarc will be particularly useful over the Downtown Aquarium’s massive reef tank as the fixtures are suspended over vast aquarium coral fields, and not exactly easy to access. No news here, other than if you are a professional aquarist working at an aquarium with a platoon of 1000 watt metal halide lamps, consider the ReefBrite Twinarc as it should save a lot of dough in bulb replacement costs. 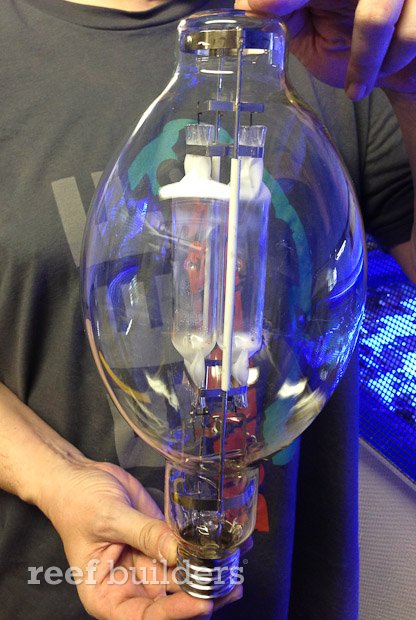