Say “triggerfish” to a group of experienced salties, and you’re apt to evoke bloodcurdling memories of once-kept triggers massacring fellow fish, shredding sessile invertebrates, mangling submerged equipment, toppling rockwork, or even biting the hand that feeds them. Let’s face it, triggers don’t exactly have a reputation for stellar behavior in aquariums.

But not all triggerfish are rambunctious brutes! Odonus niger, the popular Niger or red-toothed trigger from the Indo-Pacific, is usually quite peaceful and well-mannered—by triggerfish standards, anyway. It’s also quite hardy, adaptable, and beautiful.

Ask me what color this fish is, and I’d have to say I really couldn’t tell you—and I have one! In most photos of the species, O. niger looks dark blue overall with a greenish face, but depending on the lighting and my position relative to the tank, my specimen can appear brownish blue, blue-green, purplish, or even solid black.

Like puffers, many of the triggerfishes, O.niger included, can become very pet-like, especially when they figure out you’re the source of their food. Mine often waggles at the front glass like an exuberant puppy to get my attention if I come into view but don’t approach the tank right away.

Don’t let that dog-like enthusiasm dupe you into hand-feeding this species, however. Those teeth mean business, and O. niger will bite (it is a trigger, after all!). Also, be very careful and know the location of your trigger any time you place your hands in the tank for cleaning, etc.

The Niger triggerfish does get large. The maximum potential size is over 19 inches, counting the aforementioned caudal fin extensions, though most captive specimens aren’t going to reach that prodigious length. Nonetheless, I wouldn’t recommend keeping one in anything smaller than a 125-gallon tank. 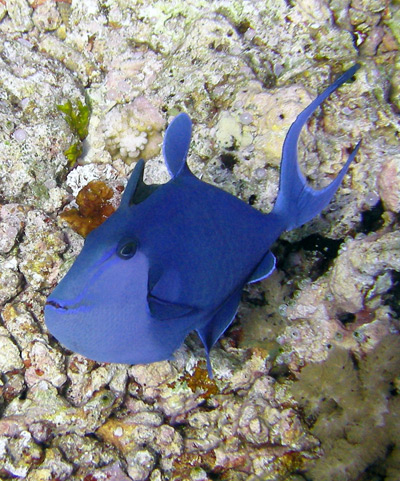 O. niger usually adapts to aquarium fare with little inducement and will accept a wide range of suitably sized fresh and frozen meaty foods as well as dry pellets. My specimen will even tear into the dried marine algae sheets I provide for my tang.

This species is, however, prone to hunger strikes when something is not to its liking for one reason or another. My specimen ate everything I offered with gusto right after I purchased it and placed it in quarantine. Then, for no reason I could discern, it stopped eating just as its four-week quarantine period ended and I was getting ready to transfer it to my display tank. No worries though! After a few days and some coaxing with fresh squid tentacles, it came back around and hasn’t stopped eating since.

Unlike many of the notoriously aggressive triggers, such as the undulate, queen, and clown triggers, the Niger trigger will tend to coexist peacefully with most moderately aggressive tankmates that are too large to eat. However, it’s very important to research potential tankmates carefully and to make sure you introduce them in the order of least aggressive to most aggressive.

Also, I would be remiss if I didn’t mention that despite the Niger trigger’s relatively peaceful reputation, it’s not unheard of for the occasional specimen to “go rogue” and turn on tankmates. Never let your guard down completely with this trigger in your community tank.

Generally speaking, the Niger trigger is reef safe, with the exception of small, motile invertebrates, but given its large size and commensurate waste production, I would not consider it the ideal choice for most reef systems.

Would you try a trigger?

So, what do you say, salties? Would you try keeping Odonus niger or another triggerfish? What experiences have you had—good or bad—with triggers? Let us know in the comments section below.