The Vital Wave LED spotlights from EcoLamps include three different colors, two of which really hit the sweet spot for highlighting the colors of aquarium corals. Manufacturers of LED spotlights have been experimenting with LEDs across the spectrum, often times the assortment of the diodes are kind of haphazardly combined to recreate a rainbow of colors, but that doesn’t usually translate well to really making corals pop. We tested the three different styles of VitalWave LED spotlights and found two of them to really resonate with our ideal for exciting fluorescent pigments of colorful corals. 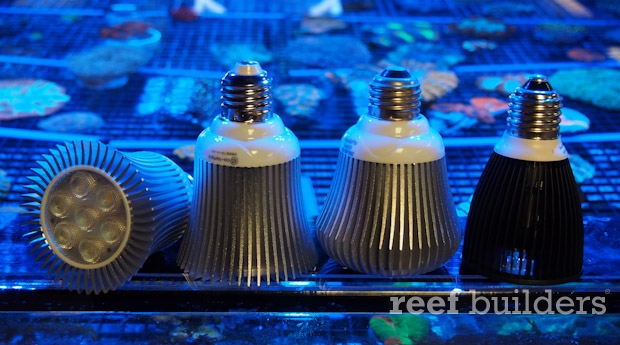 The 7 watt Vital Wave LED spotlights are of the smaller PAR30 format for screw-in lights are they are fairly comparable in size and power to previous lights tested. As you can see in the image above, the two VitalWave spots on the left are not that different from the LeDio 7 and QuadSpec V2, it even seems to be using the same driver as the LeDio LED spotlight.

The VitalWave Sun is a broad spectrum LED light, the likes of which we have seen in countless other LED lights of this sort with an assortment of colors to recreate a natural, broad spectrum white light. There’s a little white, a little warm white, green, blue, cyan and deep blue. The resulting light of the VitalWave Sun is a bright and probably most nutritious light that should be great for growth in some smaller tanks, but modern reefers will probably not want to use this light on its own.

Our favorite of the trio of Vital Wave LED spotlights is the Violet version. The Vital Wave Violet has 3 x 400nm UV, 3 x 420nm blue violet LEDs and one 450nm to balance it all out. As far as color-popping LEDs go, we’re not sure you could get any more color saturation that the cluster of diodes in the Vital Wave Violet.

This combination of LEDs to produce deep blue lighting really makes the colors pop with the fluorescent pigments of many different corals being very strongly excited by the overall spectrum. The effect is particularly striking in the shallow water SPS corals which are some of the few corals that have fluorescent blue pigments.

The Vital Wave Cyan LED spotlight is a brighter blue LED light who’s greener cast won’t be appreciated for overall lighting but dang does it make some colors explode. The yellow, oranges and red colors found in Acans, Lords, Chalices and gold torch corals stand out under the Vital Wave LED spot as if they were somehow illuminated from within.

Hammer corals come in a dizzying array of colors, including the two-toned anomaly