While in Phoenix, as we do wherever we go, we went on a tour of tanks and stores in the area and came across something truly unique. We’ve seen our fair share of awesome private tanks, killer equipment rooms and more, but the DIY project we got to see this weekend is one for the books. Local reefer Elliott is a physician with a strong engineering streak, something which was evident while following the filtration of his 900 gallon reef tank but the fridge in his garage absolutely takes the cake.

Within this refrigerator is a totally self contained refrigerated food dosing system as well as a completely automated frozen food dispenser in the freezer. The refrigerated portion with the dosing of the three blends of Reef Nutrition foods is pretty standard issue but the freezer portion is completely pushing the boundaries of automation and ingenuity.

The DIY frozen food dispenser is a little complicated but we’ll try to explain how it was done. To begin, Eliott created a turntable with 32 spots for a few cubes of frozen food. This food platter rests on top of a solid disc which itself has only one slot for food to drop into the intake of the return pump to the tank. The primary cartridge of the 32 feeding portions is turned by an industrial appliance timer which turns very slowly, and the 45 minutes it takes for a new cube of food to come into place is all controlled with custom programming with an Apex controller. 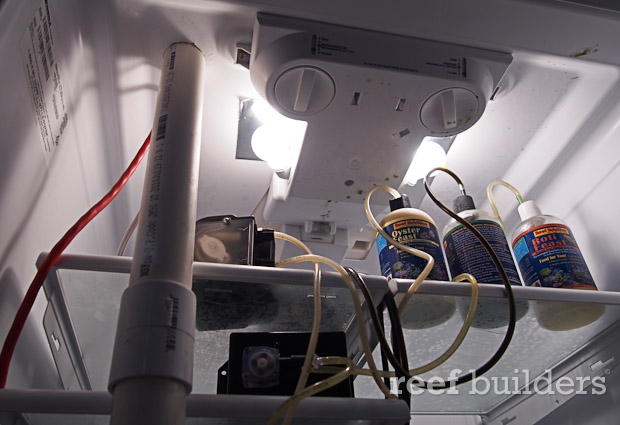 The frozen food has a tendency to stick in its receptacle so Elliott outfitted the system with a small hair dryer that comes on for less than a minute to slightly thaw the food and help push it down into the PVC tube that drops right before the intake of the return pump. At this point it’s important to point out that the success of this system relies on having a “disposable” refrigerator which has been chopped and screwed with pipes between the freezer and refrigerated portions, as well as inlets and outlets for the return pump.

The most impressive part of Elliott’s automated frozen fish food dispenser is that this contraption was the first version he constructed. Initially it was believed that lots of tinkering and experimentation would be required to get the system running smoothly but the “prototype” has become the working archetype and now Elliott enjoys having more than a month of frozen food automatically dispensed to his aquarium whether he is at home or on the road.