Here’s another exciting Reef Builders travelogue showcasing the sights and adventures of the reefing scene in a foreign country. Like our Japan and Bangkok travelogues, we visit yet again another Asian country – the mystical land of Hong Kong.

This time however, we have a very special contributor, Singaporean rare fish enthusiast who goes by the alias Digiman. Enjoy the pictures and videos that Digiman has captured and shared with us, as he takes us on his pictorial adventure of Hong Kong. 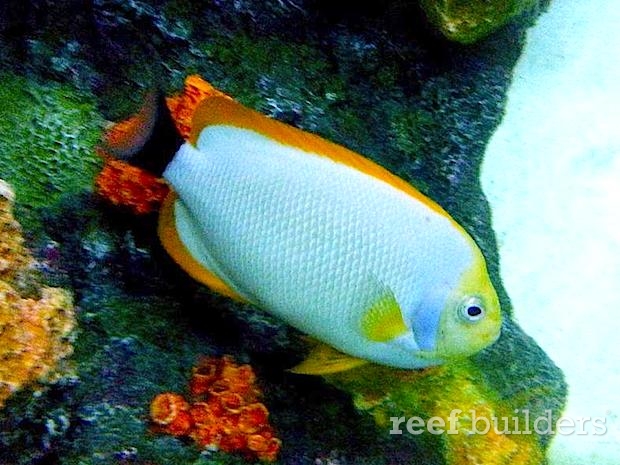 Hong Kong is a mecca for fish and one of the most famous attractions has got to be goldfish street. A seemingly endless labyrinth of LFS that sell anything from freshwater to saltwater fish, invertebrates, corals, plants and equipment.Before we indulge in the offerings of Hong Kong (HK), it’s important to know that HK is home to many secretive reefers, many with collections beyond your wildest imagination. One such person is the legendary Dr. Chung.

A dentist by profession, Dr. Chung has one of the most exotic fish collection we’ve ever seen. Perhaps his most famous possession is a spawning pair of Genicanthus personatus, which we’ve published before in the past. Impressive as the fishes may be, they are housed in tanks that are not quite your average looking reef, or FOWLR.

Everyone’s entitled to their own style and tastes, so we shall not say too much about the decor, but rather, focus on what’s living in it. All his fishes are in impeccable health, but it is with a heavy heart that we report the death of his female G. personatus. The lone male lives in a large tank along with a Prognathodes basabei, a Flame boxfish, a suspected juvenile hybrid Pomacanthus and a Debelius angelfish.

The ghostly ethereal otherworldly beauty of his stark white Personatus angelfish is broken by a dazzling mauve angelfish seen also in the video above. Rare everywhere and highly prized, the Mauritian debelius angelfish tops the wish list of angelfish aficionados worldwide. Dr. Chung’s debelius angel is a new addition, added only in the middle of this year. Collection for this fish are few and far between, but the catch this year has ended up in the aquarium of a Hong Kong dentist.

Dr. Chung maintains two other tanks. One of them houses a pair of spawning interruptus angelfish, a wrought iron butterflyfish, fuscipinnis anthias, Plectranthias pelicieri, and Pseudanthias fasciatus. Despite the rampant growth of Aiptasia glass anemones, his fishes are gorgeous and in impeccable health and are seemingly unfazed by it. Dr. Chung however, really dislikes the Aiptasias and is struggling to rid this menacing plague.

Another tank features slightly more common fish, but are interesting to observe nonetheless. It houses amongst others, a hybrid clarion angelfish, a spawning pair of joculator angelfish and a neopercularis hogfish. There is a noted disappearance of a few fishes that Dr. Chung had, such as a Tosanoides anthias and his Peppermint Angelfish. It is quite sad to say that like many others, his peppermint angelfish did not survive too long.

Still, it is a breathtaking and a special moment to be able to witness two rare angelfish in person, namely G. personatus and C. debelius. While in Hong Kong, Digiman also met up with Jimma Ma, a regular contributor to ReefBuilders and one who has an amazing collection of fish over his course.

Some of you may have remembered Jimmy’s incredible Genicanthus bellus hybrid that we posted awhile back. The fish is still alive and kicking and is in great condition, and Digiman got to catch a glimpse of it in person while at Jimmy’s. Speaking of hybrid Genicanthus,  let’s take a look at some of Jimmy’s previous collection.

Shown above are two very unusual Genicanthus angels that have been offered to Jimmy in Hong Kong. The very yellow, almost golden “xanthic” specimen above was a stunner, and is unlike anything we’ve seen before. The hybrid lamarck angelfish is more common as far as Genicanthus hybrids go, but are by no means common. Unfortunately, many of these larger swallowtail angels do not arrive in good condition and are always in need of some extra TLC before they hit their prime.

One of my favourite Genicanthus of Jimmy’s has to be this peppered G. melanospilos. A subtle sprinkling of black along the dorsal fin base gives this specimen a curious and amazing look. Hybrid or aberrant, we’re not quite sure, but one thing’s for sure it’s amazing and we’re really jealous of this piece.

Tigerpyge. THE tigerpyge, the hybrid between C. flavissima and C. eibli has gotten the whole world practically on their feet screaming in amazement of its unearthly beauty. They are rare yes, but not in Hong Kong. The HK market practically monopolises the appearance of this angelfish and get them on a rather regular basis, a few times each year. Jimmy owns five specimens. Yes five. Well four now, and you’ll see why in part 2 of this Hong Kong escapade.

Another really rare hybrid that has passed through the hands of Jimmy Ma is this amazing C. multicolor x C. bispinosa hybrid. Cebuan caught multicolor hybrids are so rare and far between, we can count the number that appear with the fingers on one hand.

A short video of Jimmy’s tank shows some of his amazing fish collection. That bellus angelfish hybrid is definitely a show stealer. The tigerpyges, Grammica dartfish, white tang and the ventralis anthias are also noteworthy mentions.

Notice the recurring theme in this post? If you guessed Angelfish, you are right. Hong Kong is the mecca for rare angelfish, their hybrids and aberrants, and they are able to filter large numbers of amazing specimens every year. Whatever hybrid you can think of that has entered the trade, HK has probably gotten it before. Genicanthus hybrids, tigerpyges, Centropyge hybrids, Koran hybrids are all offered with some sort of “regularity’ there. Wrasses and anthias and other smaller reef fish are less popular.

In part 2 of this travelogue, we share with you three special Centropyge hybrids that Digiman brought back from his HK trip. We would like to thank with sincere gratitude, Digiman, Dr. Chung and Jimmy Ma, for sharing with us so openly their amazing collection and hospitality. It’s been a few days since Digiman got back from his HK trip and we’re still hearing all about it. He had a blast down there no thanks to the incredibly friendly Jimmy and Dr. Chung.

The Shroom Room reminds us why we love Corallimorphs so much