Hippocampus nalu, the Sodwana Pygmy Seahorse was officially described today and it represent the first of these cryptic species to be found in Africa. For many years there were only three species of pygmy seahorses but today’s publication of Hippocampus nalu marks the eighth of these pinky-nailed sized masters of camouflage. 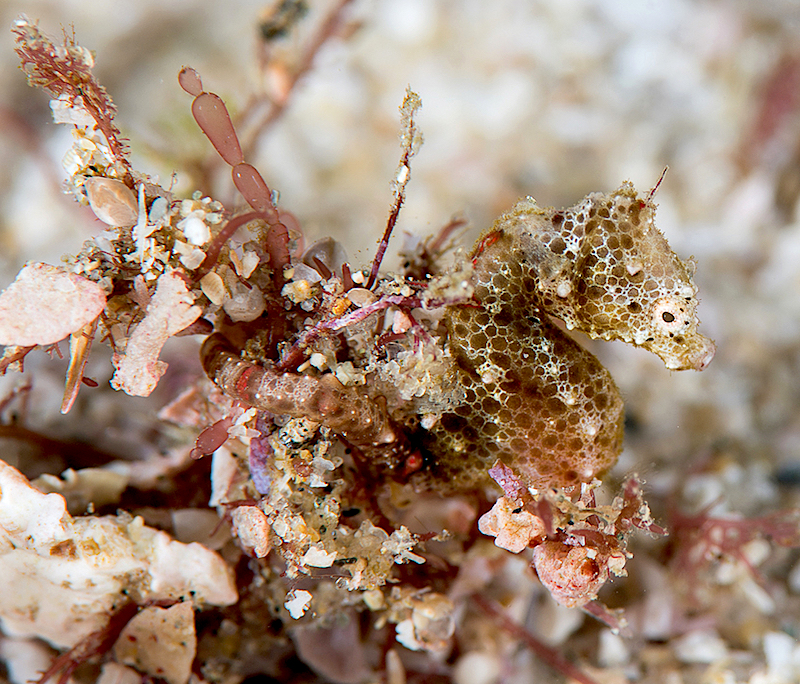 The Sodwana pygmy seahorse was first discovered by Drs. Louw Claassens and Richard Smith on dive sites in remote northeastern corner of South Africa while searching for a different Syngnathid representing a new species of pipehorse. Until now all previous seven species of pygmy seahorse have only been documented in the Indo-Pacific but Hippocampus nalu represent the first pygmy seahorses in the Indian Ocean, and a range extension for this group of more than 8,000km.

Surprisingly the type specimens of the new Sodwana Pygmy Seahorse were collected at the very modest depths of just 12 to 15 meters, or between 40 and 55 feet deep. As with all other species of pygmy seahorses, Hippocampus nalu has an extremely cryptic coloration which makes it almost disappear in its natural habitat, which explains why it has gone unnoticed until now. It’s very likely that this species, and perhaps other African pygmy seahorses are waiting to be discovered along the African coast, but it just takes an experienced keen observer to spot them. [ZooKeys]

This is My Favorite New Thermometer

May 19, 2020
Site Sponsors
Reef Builders is Supported by: