The name toadfish itself doesn’t conjure up images of a fish you’d want to see, eat, or keep in an aquarium, and this is true for most species of toadfish. However there are a few very eye catching toadfish species including the white lined toadfish, and the even more striking splendid toadfish, Sanopus splendidus.

The reason we don’t see either of these species in any captive aquarium environments is that they live in very limited natural habitat ranges and the splendid toadfish is actually protected in its home range exclusively around Cozumel, where it is endemic. Toadfish is normally cryptic and rarely come out of their hiding places during the day, which is a shame because the splendid toadfish is actually quite a looker.

A recent video shared by Ocean Reality shows how a diver manages to coax a splendid toadfish out of its burrow using a flamboyant multicolor lure (without the hook of course). The splendid toadfish not only comes out to investigate but does a little shimmy as if to confuse its potential prey – this predatory dance reminds us of the confusing motions that lionfish and cuttlefish make when approaching their prey. 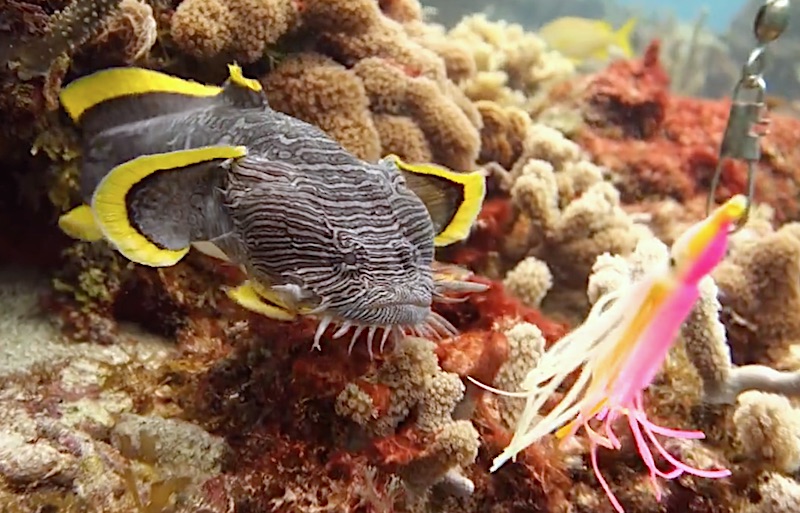 It’s not a big leap to imagine that the bright yellow margins of the splendid toadfish serve a similar function to the lionfish’s long striped fin rays and the hypnotic moving colors of a flamboyant cuttlefish, confusing prey into inaction until they are gobbled up by the predator.